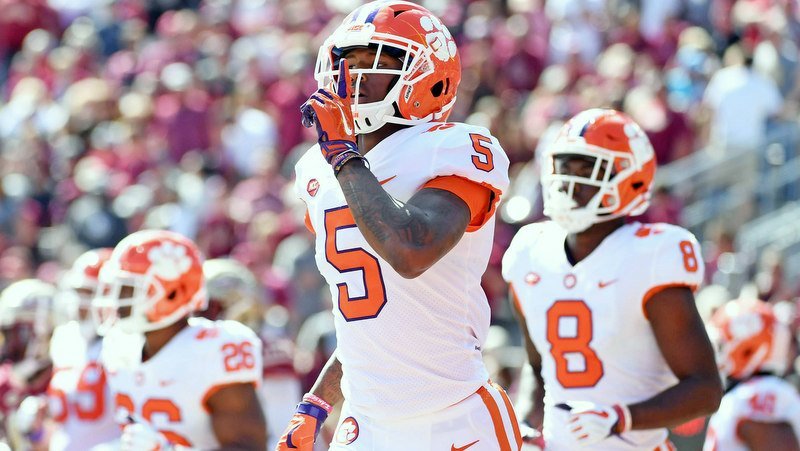 Tee Higgins quiets the crowd after his first half touchdown (Photo by Melina Myers, USAT)

TALLAHASSEE, FL – Florida St. mascot Chief Osceola rode Renegade to midfield for the pregame spear plant, threw the flaming spear into the turf at midfield and the spear fell over, snuffing out part of the flame. Things got worse for the Seminoles from there.

The biggest cheer of the day? When a targeting call was overturned early in the fourth quarter - it was that kind of day at Doak Campbell.

The margin of victory is the largest for the Tigers in the series’ history, breaking the 21-point margin set in a 35-14 Clemson win in 2005. The 49 points tied for the largest margin of defeat for the Seminoles in FSU history – Florida defeated FSU 49-0 in 1974. The 49 points was also the worst loss for the Seminoles in the history of Doak Campbell history – Southern Miss defeated the Noles 58-14 (44 points) in 1981.

The minus-21 yards rushing by Florida St. tied for the second-lowest given up by Clemson in school history.

Lawrence broke the season freshman touchdown passing record and passing yards record, both set in 2014 by Deshaun Watson. He finished the day 20-of-37 for 314 yards and four touchdowns. It was his second consecutive 300-yard passing day.

“I thought our defense set the tempo for the day right out of the gate with a couple of three and outs. We missed a couple of plays early – we had a touchdown on the first series – we just overthrew it," head coach Dabo Swinney said. "It took us about a quarter to really settle in. That’s a

really good defensive front; really good. I thought in the second quarter we just kind of took off. Again, the defense set the tempo.

“The defense with five sacks, I think they had negative 21 yards rushing. We wanted to make them one-dimensional, take the run away we were able to do that. That led to us being able to pin our ears back, bring some pressure on the quarterback and disrupt their timing. We got a couple of turnovers, we really should have had another one with K’Von (Wallace). Defensively, we were awesome. Five sacks."

Swinney was also impressed with the offense and special teams.

“I thought our special teams, outside of one play, were awesome. I don’t think they had any return yards – punt return yards. Our kickoff coverage was tremendous," Swinney said. "We pinned them deep, flipped the field. Our kick return – big play – several big plays on punt return. Amari Rodgers was awesome. B.T. (Potter) had his first field goal.

“Offensively, I think that’s the most points ever scored here by any team. Ever. Tremendous job. They are top-10 against the run, so we knew we were going to have to make some one-on-one type plays. And we did. Trevor Lawrence was awesome. 348 yards, four touchdowns. We had this guy here named Deshaun Watson, who was a pretty good player, and he (Lawrence) broke his records for yards and touchdowns and just kind of ho-hum doing it. It’s amazing. He throws a back shoulder touchdown on the three-yard line; it’s a run call, but he just confident like that. He’s confident.There’s great chemistry with him and those receivers. Just really proud of him."

The teams muddled through the first quarter, combining for seven punts. The Tigers finally got on the board early in the second quarter. Clemson drove down to the Florida St. 23-yard line but were stopped on third down. Greg Huegel attempted a 40-yard field goal, which he missed, but Huegel was knocked down on the kick and the 15-yard roughing the kicker penalty gave the Tigers new life.

Three plays later, Lawrence lofted a seven-yard scoring pass to Tee Higgins, and the Tigers held a 7-0 lead with just over 13 minutes remaining in the second quarter.

The Tigers stymied the Florida St. offense on the ensuing possession and Amari Rodgers used a 29-yard punt return to put the Tigers at their own 42. It didn’t take the Tigers long to add to the lead. Lawrence started the drive with a big third-down completion of 11 yards to Higgins to keep the drive alive, and Etienne had two carries that covered 25 yards to set up the score.

Lawrence finished the drive with a three-yard toss to Higgins and Clemson led 14-0 with 7:49 remaining in the half. The touchdown throw tied the record of 14 touchdown passes for a freshman, set by Deshaun Watson back in 2014.

The Seminoles, aided by a questionable personal foul call on third down, marched into Clemson territory on the ensuing possession, eventually reaching the Clemson 30. A dropped snap and a motion penalty moved the Seminoles back and the drive ended on third down. Francois’ pass was tipped at the line of scrimmage and intercepted by Tre Lamar.

Lamar returned the interception 43 yards to the FSU 30. A few plays later, the Tigers punched the ball in the end zone via an unusual route. Facing a third-and-goal at the one, Christian Wilkins lined up as the running back with Dexter Lawrence lined up at fullback. Wilkins took the handoff and leapt into the end zone for his first career rushing touchdown and Clemson led 21-0 late in the half.

It was the first touchdown by a defensive lineman in Clemson history.

The Tigers forced another Seminole punt and took over at their own 31 with 2:48 to play in the half. Lawrence hit Rodgers, Hunter Renfrow and Tee Higgins as he moved the Tigers down the field and Garrett Williams capped the drive with a two-yard scoring run, the first of his career, and Clemson led 28-0 at the half.

The Tigers were forced to punt on their second possession of the third quarter, but the punt was muffed by FSU returner DJ Matthews and recovered by the Tigers’ TJ Chase at the Florida St. 10. Four plays later BT Potter hit a 24-yard field goal and Clemson led 38-0 with 10:18 to play in the third.

Another Seminole punt turned into more points for the Tigers. Clemson took over at its own 32 after the punt, and it took exactly one play to score – Lawrence lofted a pass down the right sideline that hit Rodgers in stride and Rodgers once again outran the defense, this time for a 68-yard pitch-and-catch for a 45-0 lead. The pass allowed Lawrence to break another Watson record – this one for passing yards in a season for a freshman (both did it in eight games).

Florida St. finally got on the board with a 35-yard field Ricky Agauyo field goal midway through the third quarter, but Chase Brice entered the game at quarterback and promptly engineered a touchdown drive. Brice hit Diondre Overton on a 61-yard pass, setting up a five-yard scoring toss from Brace to TJ Chase. Late in the third quarter, Clemson held a 52-3 lead.

Florida St. was once again forced to punt, and this time the punt covered just 18 yards and the Tigers took over at the Seminole 25-yard line. Five plays later, Adam Choice raced 15 yards into the end zone for the score and Clemson led 59-3 early in the fourth quarter.

The Noles added a late touchdown pass from James Blackman to Keyshawn Helton for the final points.

Clemson hosts Louisville next week at noon in Death Valley.