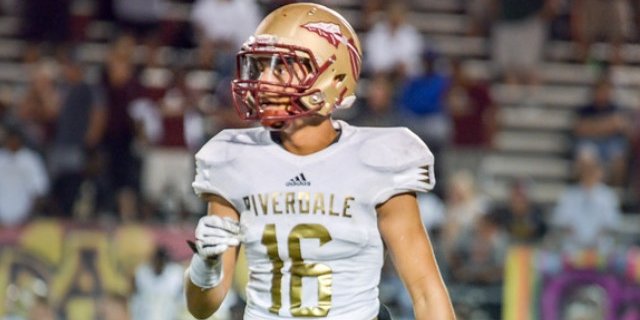 Gentry Bonds has an impressive offer list, a list that got a little more impressive Wednesday when Clemson made an official offer.

The 2017 Murfreesboro (TN) Riverdale defensive back has offers from Nebraska, Tennessee, Missouri, Memphis, Louisville, Kentucky and Georgia Tech, among others, but he picked up what might be his most impressive offer to date with the Clemson offer.

The offer didn’t come as a surprise, however. Area recruiter Robbie Caldwell had been in contact with Bonds as the Clemson coaching staff continues to make inroads in the Volunteer State.

“I knew Clemson was interested because I talked to Coach Caldwell last week so that we could start building a bond,” Bonds said. “(Defensive backs) Coach (Mike) Reed came by the school and he told my coaches that Clemson was going to offer me.”

Bonds said he will now begin the process of developing a relationship with both Caldwell and Reed.

“I didn't know either of them very well until I talked to Coach Caldwell last week and we've already started building a relationship,” he said. “Coach Reed, I just really started talking to him today and we've been talking most of the day. I feel like I'm going to have a strong relationship with both of those guys.”

Reed has a great reputation for putting defensive backs in the NFL, and three of his players were picked in the 2016 NFL Draft in safeties Jayron Kearse and T.J. Green and cornerback Mackensie Alexander. Kearse and Alexander were picked up by the Vikings and Green was picked by the Colts, something that Bonds says is impressive.

“I'm pretty sure for most recruits, it's their dream to go play in the NFL, so yes I paid attention to the guys that they put in the NFL,” he said.

Also impressive to Bonds was an offer from the team that just played for the national championship, and he will be on hand for head coach Dabo Swinney’s high school camp in June.

“It's a place where everything seems to be going right and going in the right direction,” he said. “It's pretty cool that a team that was in the national championship last year offered me. When I was watching the national championship, I thought Clemson would be a pretty cool place to play. They have a great fan base. That's pretty awesome. I will be there sometime in June. I'm going to come up for the high school camp.”

The fact that Clemson didn’t offer earlier doesn’t make any difference to Bonds.

“I wouldn't say that they have any ground to make up, but Clemson is really interesting to me,” he said. “It seems like it would be a great place to play. To be honest with you, I don't have any idea when I will make a decision. It will just be whenever it feels right.”

What kind of player would the Tigers be getting if he chose to play for Clemson?

“I consider myself a ball hawk. Every play, I'm at the ball on defense,” Bonds said. “I feel very comfortable playing either position, so I'll play wherever they need me.”

Bonds was named All-Region 2-6A in 2015 after recording 59 tackles, four interceptions, and 13 pass break-ups.