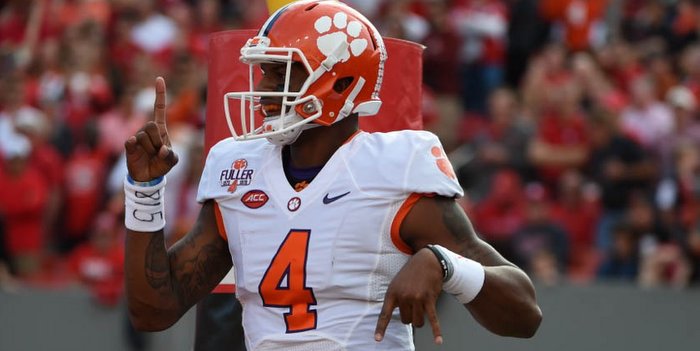 RALEIGH, NC – Welcome to Halloween in Raleigh, where anything and everything happened.

There were missed extra points (three), long kickoff returns and big plays aplenty but No. 3 Clemson rolled up over 600 yards of offense and escaped a frightening house of horrors in defeating N.C. State 56-41 on homecoming.

Clemson was led by quarterback Deshaun Watson, who put on maybe his best performance of the season. Watson finished the day 23-of-30 for 383 yards and five touchdowns. Running back Wayne Gallman had 30 carries for 174 yards.

The Tigers put up 623 total yards of offense on State’s third-ranked defense, but the defense gave up 380 and the special teams were a nightmare as the Tigers missed two extra points and gave up a 100-yard kickoff return and another that covered 43 yards.

N.C. State took the opening kickoff and made it look easy in getting the first score of the game. The Pack drove down to the Clemson 13 yardline, and facing a 4th-and-2 elected to go for it. Jacoby Brissett faked the pitch and waltzed untouched into the endzone. The extra point was blocked and the Pack had a quick 6-0 lead.

Ray-Ray McCloud returned the ensuing kickoff 43 yards and four plays later Deshaun Watson followed a Charone Peake block and raced 24 yards into the endzone for the answering score. Greg Huegel hit the extra point and the Tigers led 7-6 with 11:16 remaining in the first quarter.

It took the Wolfpack exactly one play to answer. Nyheim Hines returned the ensuing kickoff 100 yards for the score, the second kickoff return allowed for a touchdown by the Tigers this season, and the Pack held a 13-7 lead just four minutes into the game.

Keeping with the weird, All Hallows Eve theme, Clemson scored in just two plays. Watson hit a wide open Hunter Renfrow down the middle of the field and Renfrow raced untouched in for the 57-yard score. And – like on the Pack’s first score – the extra point was blocked and it was tied at 13-13.

The Pack’s next drive ended with a turnover. N.C. State drove the ball to midfield, but B.J. Goodson sacked and stripped Brissett of the ball on third down. The loose ball was recovered by Ben Boulware, and the Tigers took over at the Pack 46 yard line. Clemson converted the fumble into a 29-yard field goal by Huegel and the Tigers led 16-13.

The Tigers added another Huegel field goal to lead 19-13, and the teams traded punts over the next few possessions. However, the Pack got a 40-yard touchdown pass from Brissett to Jaylen Samuels – another wheel route that saw a linebacker get lost – and State had a 20-19 lead with 5:46 to play in the first half.

The Pack forced a Clemson punt and had a first down inside the Clemson 20, but B.J. Goodson forced a nine-yard tackle for loss and the Pack missed a 44-yard field goal. Clemson took over at its own 27 yard line with 55 seconds left in the half, but declined to take a knee. Watson hit Artavis Scott for a 31-yard gain, and Watson hit Peake for a 42-yard touchdown the gave the Tigers a 26-20 lead at intermission.

The teams traded punts to start the second half, but the Tigers managed to widen the gap with an 11-play, 84-yard drive on their second possession. Gallman bowled into the endzone from three yards out to give the Tigers a 33-20 lead midway through the third quarter. The drive saw Clemson break the season-high yard mark against the Pack – NC State gave up 358 to Virginia Tech two weeks ago but saw Clemson make it to 369 with ease.

It took the Pack just three plays to answer, getting a 66-yard run by Samuels to the Clemson that set up his own one-yard plunge, making it 33-27 Clemson with 7:13 to play in the third quarter.

It took Clemson just six plays to answer. The Tigers took over at their own 25 and six plays later Watson dropped a throw over the corner and into the hands of Deon Cain to complete a 40-yard scoring toss. It was the first touchdown of Cain’s career, and it gave the Tigers a 40-27 lead with 4:39 to play in the third quarter.

A Gallman fumble in Clemson territory set up a State scoring pass, making it 47-34 with 11:45 to play. The touchdown pass marked the most points the Tigers had given up since the Georgia game in the 2014 season opener.

The Pack went for an onside kick, but the kick went out of bounds at the State 44-yard line, giving Clemson prime field position. It took the Tigers just two plays to once again – you guessed it – answer. Watson hit a wide open McCloud down the seam for a 36-yard scoring toss, giving Clemson the 53-34 lead after the extra point was blocked.

A 47-yard kickoff return by the Pack set up the answering score – see a theme here? – as Brissett threw a 28-yard scoring pass just two plays later that made it 53-41 with 10:58 to play. The Pack attempted yet another onside kick, and once again it failed and Clemson took over at the 44-yard line of the Pack. Huegel hit a 22-yard field goal to end the drive, and Clemson led 56-41 with 5:52 to play.

The Pack drove down the field – aided by a roughing the passer call – but failed to convert a 4th-and-9 inside the Clemson 10 and the Tigers took over with just over three minutes to play.

Clemson vs. NC State Box Score
Comment on this story