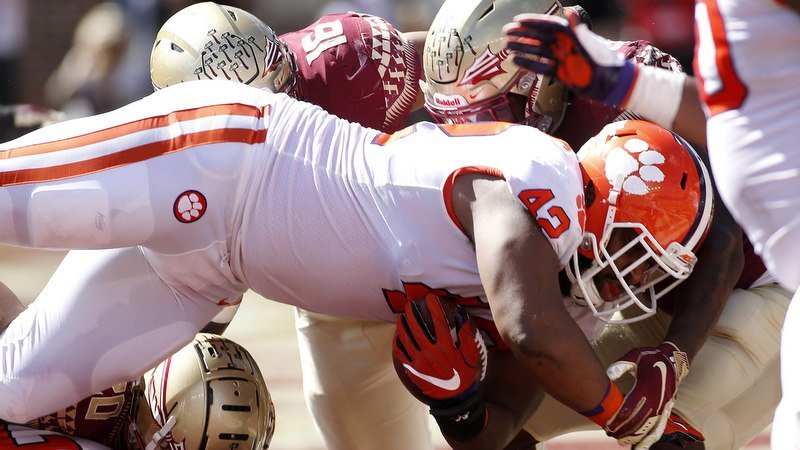 Starting defensive tackle Christian Wilkins became the first defensive lineman in the history of Clemson football to score a rushing touchdown with his one-yard plunge in the second quarter of Saturday’s 59-10 defeat of Florida St.

With Clemson ahead 14-0 and facing third-and-goal from the one, Wilkins lined up in the backfield behind Dexter Lawrence. He took the handoff from quarterback Trevor Lawrence and burst over the right side for the score.

“He's got a big stomach to hand the ball off to. He's funny. He's an athletic dude,” Lawrence said. “We practiced that a lot this week so it was cool to see him score a touchdown.”

“I was excited for him. Christian is an unbelievable leader for this football team,” Elliott said. “He's a do whatever you ask him kind of guy. That was a little package that we said, 'Let's have a little fun with it.' We ran several of those kinds of plays and people were starting to gear up for it so we changed it up and changed the formation a little bit. I was happy for those guys.

Wilkins said he was grateful for the opportunity, then added that the score was made easier because of the lead block of Big Dex.

“I'm just glad I got the opportunity and the chance. It was a lot of fun. We worked on that all week. It was a fun experience. I'm glad I got to do that,” Wilkins said.

“He (Dexter) did a great job. Dex cleared it wide open and the o-line did a great job. I want to thank them and thank Dex for sure. He cleared it. I definitely want to thank Trevor. That was a nice handoff. I was a little nervous about that but it was a nice, smooth, easy handoff. I definitely want to thank the other running backs too because I potentially took a touchdown away from them. They were all happy for me and all excited, so it was nice to see that they were cheering me on. That was fun.”

Elliott smiled and said Lawrence might be the biggest fullback in the nation.

“He probably is. They talk about the guy from Kansas City. He might rival him,” Elliott said. “I think he's like 347. Dexter is a guy that - those guys will do whatever you ask them to do and I think that resonates with their teammates because they're the best players at their position but they're also the most humble and they'll do whatever coach asks them to do.”

However, Elliott knows that Wilkins won’t be satisfied with the rushing touchdown because he still wants to play quarterback.

Wilkins said he wasn’t surprised he got the chance so early in the game. After all, he feels like he gives the Tigers the best chance to score.

“You've got to get your guy in there. You've got to get the heavy guy in there,” Wilkins said. “I'm the sixth string running back right now but I was able to get it done. I wasn't surprised. I was ready for it once we started getting closer because I knew we might have to go with it. I'm glad I got the chance.”

He then agreed with Elliott and said he wants to play quarterback and add a passing touchdown to his career stats – he already has a receiving touchdown to go along with Saturday’s rush.

“I know this was kind of for coach to shut me up because I've been in his ear a lot about playing quarterback or getting on offense,” Wilkins said. “But I'm still going to be after him next week and the week after and the week after that until he lets me play quarterback. I was definitely happy for this one.”