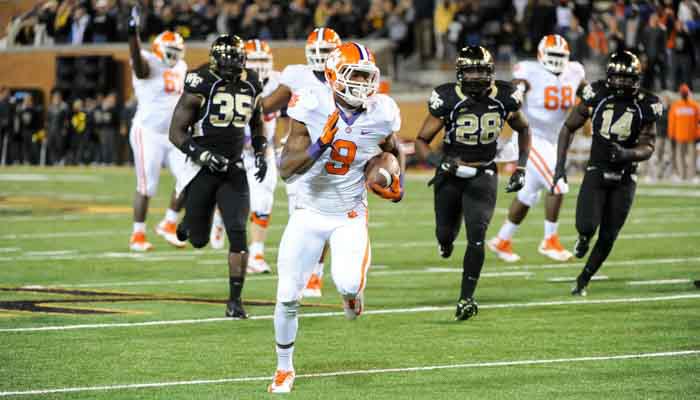 Swinney says sometimes you need a little pain to get better

The players were fuming, according to head coach Dabo Swinney, who said that last Saturday’s 43-42 loss to Pitt had the expected effect on his team.

“Not very happy. We’re here all day on Sunday – we’re a bunch of old goats and wallow around here and fight through grading it and own it and understand what we’ve got to do better as coaches and all of that stuff,” Swinney said Tuesday in the WestZone. “The players don’t come in until Monday because Sunday is their off day, but some of them will roll through and you’ll get a chance to talk to them. They were very serious, dialed in, mad, frustrated, disappointed about all of the emotions that you usually have if something doesn’t go your way and you work so hard for it. There’s disappointment. These guys care. They’re not just, ‘Oh well, we lost a game.’ They care and they work really, really hard.

Swinney then reminded all present that the Tigers are still a great team. 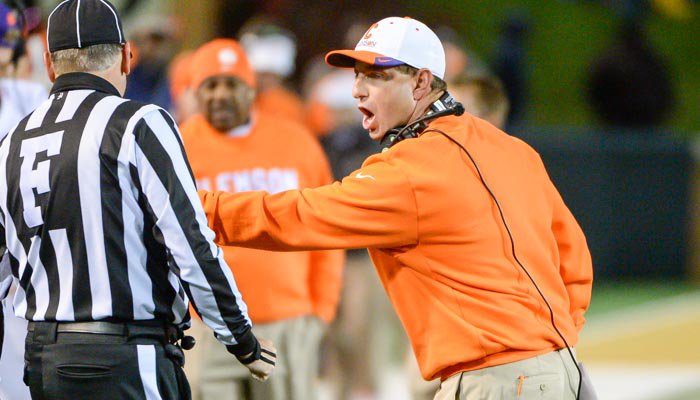 Swinney says sometimes you need a little pain to get better"

“Nothing has changed in that if we were 10-0 right now we’re a great team. We’re 9-1 and we’re still a great team regardless of what happened,” he said. “I will say this – let’s take one play – we gave up four touchdowns in the redzone and if you give up three touchdowns and one field goal you win the game. We had two trips in the redzone that we got no points, so if you get a field goal on one of those you win the game. If you get one yard, you win the game. If you get one yard and win the game, well guess what we’ve still got problems we’ve got to fix. Sometimes, prosperity is a terrible teacher. Sometimes you need a little pain along the way and failure is part of that.

“They would’ve shown up yesterday ready to go like they always. There was a sense of urgency yesterday that there was a hard edge to it and I like that. At the end of the day it’s about how you respond. If you win a big game, how do you respond next week? Lose a game, how are you going to respond the next week? That’s what life is about. How are you going to respond to anything? How we respond this week will determine the outcome this week. We’re either going to be 9-2 or 10-1, it’s a very simple game. Guys were disappointed but they were eager and ready to get back to work and watch the tape and challenge each other and go get it.”

Clemson travels to Wake Forest this Saturday with a spot in the ACC Championship Game on the line – if Clemson loses they won’t win the division, but Swinney says he’s happy the Tigers have a chance to play again so soon after a loss.

“Obviously, very disappointed coming off of a loss. Very disappointed in that. It’s been two years since we’ve had a Tuesday press conference coming off of a loss, so we don’t want to make that a habit, that’s for sure,” he said. “We are excited we get to a chance to play a game this week. That’s one thing I talked to the team about this week – the last time we felt this way we had to wait nine months and stew on it. We actually get to play in four more days. We’re really excited about the opportunity to play and play better and try to get back on track with what we’re wanting to accomplish.”

Wake has won six games and will provide a tough challenge, according to Swinney.

“It’s going to be a tough game and a tough task going up to Wake Forest. They are a much improved team. Dave (Clawson) has done a great job up there,” he said. “They’ve got some cats up there. They’ve got some guys that are long and athletic, really done a good job. He’s played a lot of freshmen in the last couple of years since he took over the program, especially last year on offense they were all freshmen. They are much improved. They’re 6-1 and 4-1 at home. If you really study them, they’ve battled everybody. If you watch the Louisville game, it was 16-12 with about five minutes to go in the game and they had a blocked punt and a big six and it got away quick. Florida State, same thing. These guys have really done a nice job. 4-1 at home, so we know it will be tough task, so we know we’re going to have to play well.”

“Offensively, much improved from where they were last year. They played a lot of freshmen last year and now those guys are sophomores and they’re better and more experienced. Their quarterback is a really good football player. He’s the leading scorer on the team and he’s also the second leading rusher. He’s a good runner as well. He’s not just a quarterback runner with designed quarterback runs, he’s an excellent scrambler and that’s where he’s made some of his biggest runs. We’re going to have to be very disciplined with the pocket and how we get after him because he’s dangerous. He’s got a bunch of yards. They’ve had some sacks and he’s still almost got 500 yards rushing. Really good football lpayer that I’m impressed with. They’ve got their entire offensive line back and they’re better. They played a lot of freshmen on the offensive line last year and they’ve improved tremendously. They want to run the football and their doing a lot better job throwing the football this year. They’ve got some good receivers out there – No. 15, No. 17 and No. 1. 15 is a guy that has a chance to be a realy good player for them. They’ve got a really good freshman running back, No. 36. He’s in there and No. 32 and No. 22 are also running the ball. Those guys combined have a really good rushing attack. They’re going to run the power, zones, orbits, run pass options. Very impressed with them. The thing they’ve done the best is they’ve controlled the clock. In every game they’ve played they’ve done a good job of controlling the clock and they’ve done a good job of taking care of the football and giving themselves a chance.

“They’re very good on defense. Defensively, they’re in the top two, three or four in about every defensive statistic in this conference. Very good group. Got seven starters back. 32 sacks on the year – we’ve got 35 to put that into perspective. They get after you up front. That No. 53 is a very good football player. He’s top 10 in the nation in sacks. They’ve done a good job of getting some length and some athleticism and some speed and size in that defensive line. They play a lot of guys and they’ve got a lot of depth. I’m impressed with their secondary. Their safety, No. 3, has five interceptions, second in the league. The biggest thing about what they’ve done defensively outside of the sacks is they’ve created a lot of turnovers, so they’re plus-nine in the turnover margin, easily leading this conference. The combination with what they do defensively and offensively – controlling the clock and not turning it over – has allowed them to be incredibly competitive with everybody they’ve played.

“We’re going to have to play well and we know that. We’re looking forward to having another opportunity to see if we can get back on track. There’s a lot on the line for us. We have a chance to win the division. The good news is we have a really good football team and we’re very capable of winning the game but we’re going to have to play well. Wake Forest is 4-1 at home and they’re going to fight with everything they have. For us it’s about having a great week, fixing some of the mistakes, learning from some of the mistakes we made and getting back on track this week.”

“I’m not ready to answer that right now. They’re very optimistic but we haven’t practiced today. We just had one night last night. I’ll be in a little better shape when I see y’all later this week. He looks good and they’re optimistic is what they tell me. If he can play, he’ll play and if not we’ll go on to the next guy. Hopefully, he’ll be ready to go.”

“I did not visit with him yesterday. I talked to him via phone. I don’t know anything new.”

Defensive tackle rotation with Pagano out

“We’re going to get him back certainly by the bowl. The guy that’s got to step up for us is Albert Huggins and Jabril Robinson. Jabril has been back inside for several weeks now, but those two guys are going to have to play big for us this week and going forward.”

“We just went with our two calls that we had for that situation that we’d worked all week and it didn’t work out. They were better than us on that play. We’ve been 100-percent in our heavy package all year and now we’re 99-percent. We didn’t get it done. Give them credit. They defeated us so give them credit and move on. We work all week and we game plan and we felt like that’s what we needed to do and it didn’t work out. It’s bad coaching and on us because obviously we had a plan in that regard.”