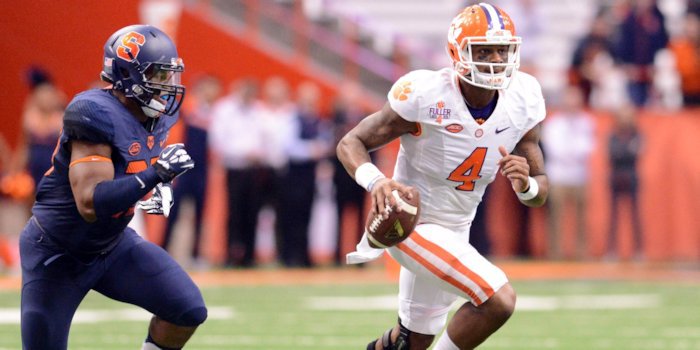 SYRACUSE, NY – Clemson’s trip to Syracuse wasn’t enjoyable in many respects, but the Tigers came away with the win.

Deshaun Watson accounted for 461 total yards of offense, but the No. 1 Tigers let an early 14-0 lead slip away and had to hold on to beat stubborn Syracuse 37-27 Saturday in the Carrier Dome, likely damaging their chances at keeping the nation’s number one ranking.

Watson was 34-for-47 for 360 yards and two touchdowns through the air and also rushed 13 times for 101 yards, his second 100-yard rushing game of the season. Charone Peake caught seven passes for a career-high 120 yards.

Clemson improved to 10-0 overall and 8-0 in the ACC, the fifth consecutive season the Tigers have notched at least ten wins. Syracuse dropped to 3-7 overall, 1-7 in the ACC.

Clemson’s defense came into the game allowing just 118 yards per game on the ground, but Syracuse gashed the Tigers for 242 yards.

“I don’t think you can let two or three guys making mistakes paint a broad picture," Clemson head coach Dabo Swineny said. "We had 570 yards of offense. It’s not a beauty pageant, this is football and all you need is one more point than the opponent. Everyone has good players and good coaches. We didn’t play Clemson football tonight. But at the end of the day, we played well enough to win.”

Next up for the Tigers is a home date with Wake Forest, the final game of the season in Death Valley. It will kick off at 3:30 p.m.

Syracuse won the toss and elected to defer, a decision that cost them a quick touchdown. The Tigers threw deep on the game’s first play and Watson hit Charone Peake in stride for a 64-yard gain. Wayne Gallman took the next play to the left side and rumbled his way into the end zone from 11 yards out for a 7-0 lead just 33 seconds into the game. It was the sixth time this season the Tigers had scored on the game’s initial drive, and the second time Clemson scored on the game’s second play.

The first play of the game for Syracuse was a fumbled snap that was recovered by Kevin Dodd at the Syracuse 23 yard line. Five plays later – aided by a Syracuse offsides penalty on third down – Watson powered in from three yards out and Clemson had a 14-0 lead just two minutes into the game.

The Tigers forced a Syracuse punt, but Clemson handed the ball right back. The Tigers inserted Kelly Bryant at quarterback and lined Watson up outside, but Kelly fumbled the ball on the inside run and Cuse took over at the Clemson 28. One play later, Ervin Phillips raced untouched into the end zone and Clemson led 14-7.

Four plays later, Watson threw to Hunter Renfrow in the seam for a 21-yard gain but Renfrow fumbled at the end of the run to give Syracuse new life at their own 46. However, Jayron Kearse ended the drive by blocking a 48-yard field goal attempt.

Clemson punted on the ensuing drive, and Syracuse took advantage of poor Clemson run defense to tie the score. The Orange had a 42-yard rush by Jordan Fredericks that set up a 10-yard scoring by Zack Mahoney, tying the score at 14-14 with 3:34 to play in the fourth quarter.

“Their scheme with getting their run game going," Swinney said. "They came in with the triple option and basically running some slip flow and cracking on the back. I thought their quarterback did a great job and played a big game for them. They had 250 yards rushing, that’s the stat of the night.”

It took Clemson 10 plays and 75 yards to respond. Watson threw several quick hitters to the sideline to march down the field and capped the drive with a four-yard scoring toss to Peake, a throw to Peake’s back shoulder as he fell down, and Clemson led 21-14 at the end of the first quarter.

The Tigers forced another Syracuse punt, and Clemson’s offense didn’t take long to strike. Zac Brooks took the first play of the drive 24 yards into Syracuse territory and two plays later Watson dropped a 40-yard throw over the shoulder of Deon Cain for a 28-14 lead two minutes into the second quarter.

That set up a series of weird plays – punters run into, long plays called back because of penalty and a fake punt – the latter setting up a Cole Murphy 48-yard field goal that made it 28-17 with 3:20 to play in the half.

Clemson added a 38-yard field goal by Greg Huegel with 37 seconds left before the half and Clemson holds the two touchdown lead.

The teams traded punts to begin the third quarter, but Clemson’s defense got gashed time and time again on the second drive by the Orange. A Clemson punt pinned Syracuse deep at its own three, but Clemson’s in ability to set the edge began to hurt as the Orange took just eight plays to go 97 yards. Mahoney capped the drive with a way-too-easy 12-yard run that made it 31-24 midway through the third quarter.

That started another wild flurry – penalties and missed opportunities – that lasted into the fourth quarter. The Tigers finally put a drive together, but Jordan Leggett dropped a pass inside the 10 and Watson was drilled on third down as Clemson settled for a 31-yard field goal from Huegel to lead 34-24 with 13:33 to play.

However, Syracuse used another long play – a 51-yard run – to set up another Murphy field goal and Clemson led 34-27 with 10:18 to play. The Orange kicked off and pinned the Tigers inside the 15, and the Carrier Dome crowd stood to its feet.

However, Watson went up the middle for 39 yards to start the drive and Huegel hit a 42-yard field to give the Tigers a little breathing room at 37-27 with 6:58 to play.

The Tigers forced another Syracuse punt and took over at their own 21 with 5:57 to play and were able to run out the clock on the win.

Clemson vs. Syracuse Box Score
Comment on this story