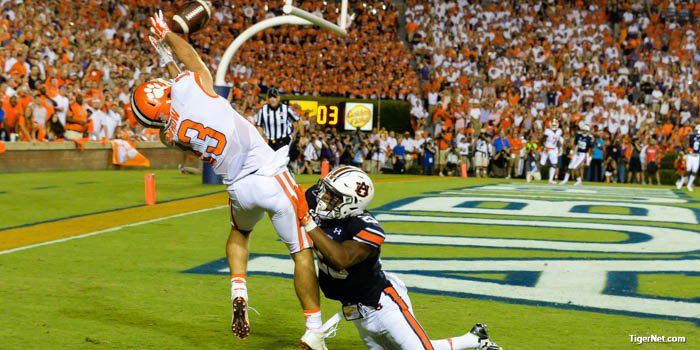 There was some frustration and plenty of stops and starts for the Clemson offense Saturday night at Auburn, but the Tigers did enough to get the win.

And that’s what quarterback Deshaun Watson and co-offensive coordinator Tony Elliott prefer to focus on.

Watson completed 19-of-34 passes for 248 yards and a touchdown to Hunter Renfrow, but the junior quarterback also threw an interception as the Tigers finished with 399 yards of total offense.

“We’re never satisfied, regardless if we put up 19 points like we did (Saturday) or put up 70,” Watson said. “There’s never satisfaction or a time or place when you can get complacent about yourself and feel good. There’s always mistakes; no one’s perfect. It’s a hostile environment. Auburn’s a very good team, and they came ready to play, so we capitalized on the opportunities we had, and we left a lot of points on the field.”

“You know, hats off to their D-line,” Elliott said. “They’ve got one of the best D-lines in the country, and they were ready for what we were doing. They mixed it up. There were a lot of things in preparing for the game that there was some uncertainty. We saw a lot of what we saw on film, but there was good mixture. Coach Steele did a good job, and it was tough sledding. It was hard in the trenches, but we were able to find some stuff.”

The Tigers’ struggles on third downs, converting 6-of-17 in those situations, kept the offense from being as crisp as head coach Dabo Swinney wanted it to be.

Watson had 21 yards rushing on 11 carries, while Wayne Gallman stepped up with 123 yards on 30 carries. Gallman also had the Tigers’ other touchdown on fourth down near the goal line.

Clemson finished with 151 yards on 44 carries, an average of 3.4 yards per carry.

“They really geared on taking the quarterback run away from us, so we had to find some alternate ways to get the ball on the perimeter and try to make our rushing yards,” Elliott said. “I thought early on (Watson) might have been off a little bit, but then he got in rhythm, and he made some really, really big throws. The one that he converted for a touchdown was an all-out blitz. He didn’t have anybody to pick up the free safety; he knew he was going to get hit. He stepped in there, and he delivered a big ball to Renfrow, and that was probably the play of the night. So, overall, he’ll probably say not up to his standard because he expects himself to be perfect in everything that he does.

“But a big win on the road, versus an SEC opponent, so it’s a starting point for us. Obviously, a lot of things for us to clean up; it’s a great learning opportunity, but nonetheless, the guys, they proved they could find a way to win.”

One of the keys to finding a way to win was getting wide receiver Mike Williams involved in his first game back after getting injured in the season opener last year. Williams finished with 174 yards on nine catches.

“We thought that if they came out and played him aggressive with bump-and run coverage, that he could have a big night,” Elliott said. “We also saw from day one when he started in camp that he was a different guy and that he was focused. We knew that we needed to target him, and it just so happened that him and Deshaun created some chemistry there, especially in the second quarter, for us to be able to create some drives.”

Watson is now ready to look for more chemistry from the entire offense. He completed passes to six receivers as Artavis Scott had three catches for 30 yards and Renfrow added two for 27.

“Yeah, we’re going to build confidence,” Watson said. “A lot of experience made; we’re battle-tested right out the gate, and it’s a great learning lesson for all the guys, especially the younger guys. Now, we turn our focus and go back home and build on what we did (Saturday).”