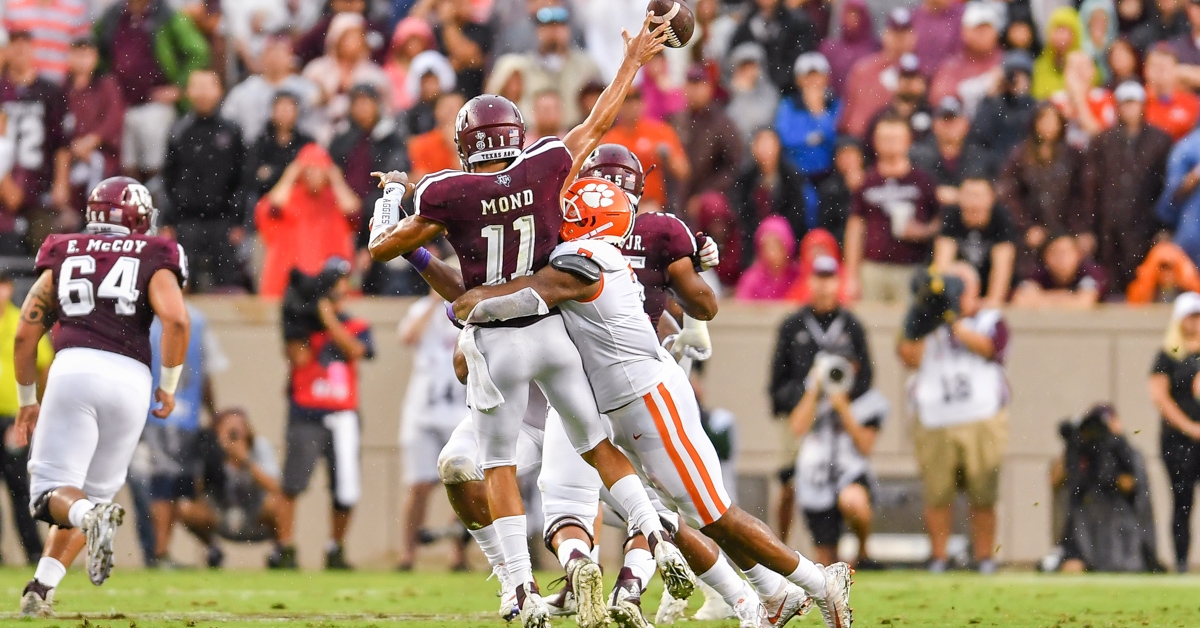 The Tigers and Aggies play Saturday at 3:30 pm

CLEMSON – Next up, a talented Texas A&M team in a big boy matchup.

No. 1 Clemson defeated Georgia Tech 52-14 Thursday night but will take a step up in competition this week when it hosts No. 12 Texas A&M. The Tigers defeated the Aggies 28-26 in thrilling fashion in College Station last season.

"We only have one tape from this year but had an extensive summer study on them,” head coach Dabo Swinney said on his Sunday evening teleconference. “They're really talented. They have recruited very well. They're well-coached. Their quarterback (Kellen Mond) is a really good player. He hurt us last year. They have outstanding skill and big guys up front on both sides. This will be as good a secondary as we will see all year. They are a really good team coming off a good year in Jimbo Fisher's first year. They're going to be one of the better teams in their league. They're talented enough and have everything they need to beat us."

Swinney says Mond is a game-changer.

“He's big. He can really run. His progression as a passer, Jimbo has done a great job with him,” Swinney said. “He can really throw the football. He's going to be very well-coached and schooled up. He knows their system very well. He played great against us in his second game in that system last year. He's an excellent leader. He's got great instincts. He can beat you throwing and passing and that is a challenge."

He then said that the A&M defense will be a handful for the Clemson offense.

“Looking at the people they've got back, their secondary is great. Their corners are long. It's a big boy matchup on the edges,” Swinney said. “Their defensive coordinator does a great job schematically. We have a long history with him from his time at Wake. They're big upfront. They have recruited very well. They have a lot to work with and they are well-coached. A lot of speed on the perimeter. They're going to be a handful."

“I think he's in a good place. I think he's really close. We'll see. He's definitely ahead of schedule. He's doing great. I think his timeline has moved up. I would say anything is possible at this point."

Looking back at Georgia Tech

“We've had an opportunity over the last two days to study ourselves and get a head start on Texas A&M. I'm really proud of our team and our staff. We were focused, we were ready and were able to play a lot of people against an ACC opponent this early. That can really help us moving forward. A lot of good things in the game, but we were disappointed with penalties and turnovers. Outside of that, a pretty clean first game. We had great energy.

"Offensively, to be able to run the ball the way we did against a good ACC defense, that's huge for us moving forward. 411 yards rushing. If we can do that effectively, it'll set up explosive plays for us. We only had five yards lost. The defense got turnovers and we scored. When we turned it over, the defense stopped them. All in all, 52 points, and that is playing a lot of guys.

"Defensively, four sacks and eight tackles for loss. We had a really good start and with so many new people. They responded incredibly well. When the turnovers came, they didn't give up any points. The fourth-down stops, third-down defense, the goal line, just great. We played hard. It was fun to see a lot of new people in the game.”

"He was outstanding. He played close to 30 snaps. He graded close to 80 percent. He graded a winner. He had three tackles, two assists, a TFL, a sack. He looked like a veteran. And that's what we have seen in practice. To see him take that to the field in that environment was great to see. I'm just so impressed with him. That's why he ran out there first. I think he graded the highest of our tackles and he is a true freshman."

What he knows about his team

“First of all, we've got a team. We've got a good group of guys who like each other and support each other. It's so fun to see players get excited about their peers' success. That's awesome. We've developed the chemistry that I felt like we needed to have. And we're talented. We're a young, but talented team and we're going to get better. We have a team that is focused and excited and ready to play. Those are all positive things. We dominated the first game but made enough mistakes to teach off of. We have a lot of things to correct. A lot of guys did not grade a winner. I love our special teams. We've worked really hard in that area. We've got a team that will respond."