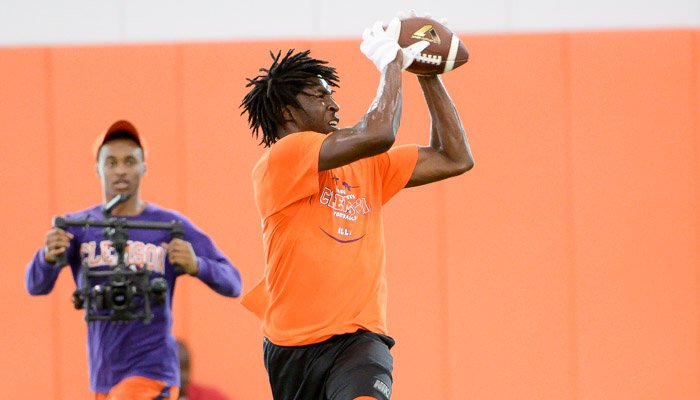 Robinson hauls in a pass during camp last week

The Tigers have reeled in top offensive prospects out of the state of Florida during Swinney’s tenure, and recent hauls have included playmakers like Sammy Watkins, Artavis Scott and Deon Cain. Robinson, out of Lakeland (FL), now stands as one of Jeff Scott

The 6-3, 192-pounder was joined by teammate and 2017 running back prospect Anthony “A.J.” Davis and hung out with 2016 Clemson receiver commit Cornell Powell

“We had fun. It was really just us two [Anthony “A.J.” Davis] getting to know those two,” Robinson said. “They were were getting to know us. We've definitely started a little bond. Camp was great.”

Robinson has offers from some of the nation’s top offensive programs in Auburn, Baylor, Clemson, Florida St. and Ohio St. and he said he is taking an interest in Clemson’s offensive style.

“Right now, I know they run a little pistol and they throw the ball and run it a lot,” Robinson said. “Their offense is really balanced when they play.”

What stood out for Robinson?

“The way the coaches acted towards us,” he said. “When we got there the way they treated us really stood out about the camp and the visit to Clemson.”

Another highlight was getting to spend time with Scott, Robinson’s recruiter and possible position coach and offensive coordinator if Robinson were to wind up a Tiger.

Robinson said the Tigers are in the running for his services and said he hopes to come back for a game in the fall.

“They're in the running but there are a couple of more schools up there, too,” he said. “I'm going to try to come back for the Notre Dame game and for one of the elite junior days next year.”