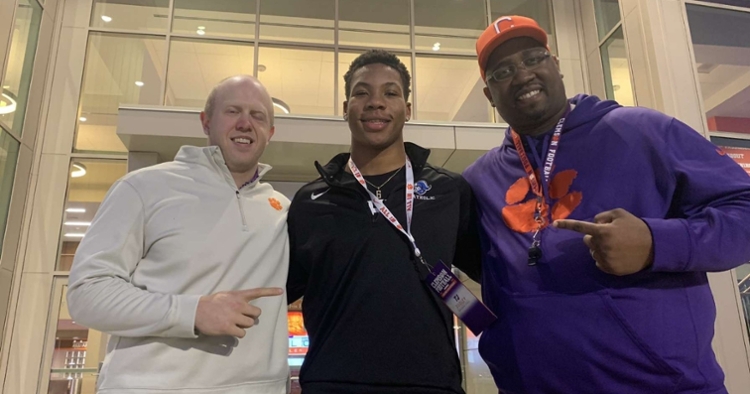 Clemson made quite an impression on one of the top 2022 linebackers out of the state of Alabama.

TJ Dudley is a 6-2, 210-pound outside linebacker out of Montgomery (AL) Montgomery Catholic who figures to be one of the top prospects in his recruiting cycle. Dudley made the trip from Alabama to Clemson on March 6th, where the coaching staff showcased to Dudley just what sets the Tigers apart.

Dudley came away impressed with the facilities and the staff and is already planning on coming back to Clemson this summer. Dudley is hoping to pick up a Clemson offer during the spring or the summer to go along with the eleven offers he already holds.

TigerNet caught up with Dudley to find out about his visit to Clemson and his future plans for his recruitment.

“Honestly the visit was great. I loved the staff,” Dudley said. “Everyone was genuine and you could tell every coach wanted you to be there. And the facilities were beautiful.”

Dudley has mainly been in touch with defensive tackles coach and recruiting coordinator Todd Bates, who recruits Alabama for the Clemson staff. But the visit provided the opportunity for Dudley to meet defensive coordinator Brent Venables and head coach Dabo Swinney.

“I met everyone there and they told me they not only recruit good players, but they also recruit good people and that’s more important to them. But they also said I’m a great player,” Dudley said. “I loved Coach Venables and Coach Swinney. You can tell they’re both great people and really care about their players.”

Where does he fit on the field? What makes Dudley a special player and who does he compare himself to?

“Isaiah Simmons due to the fact that he’s so versatile like me,” he said. “You can put me anywhere on the field, offense or defense, and I’ll exceed at that position.”

Dudley is also a basketball player and comes from an impressive athletic background. His numbers in the weight room are also eye-popping for a kid his age. Dudley knows that he is a good player at this time, but there is always room to improve.

“I have maxes of 285 on bench, 500 squat and 255 hang clean,” Dudley said. “I play basketball, which is the only reason I might not enroll early. I’m fast, but I feel I could be faster. Other than that, my best skills are probably being a ball hawk and being aggressive.”

Although Dudley is only a sophomore in high school, his offer list already includes the likes of Mississippi State, Georgia Tech, Nebraska, West Virginia, and in-state Auburn. When talking about visits and top schools, Clemson continued to come up in the conversation.

“I’ll go to the in-state schools such as Alabama and Auburn,” Dudley said. “And of course, the Clemson camps both times. Clemson definitely is the leader.”