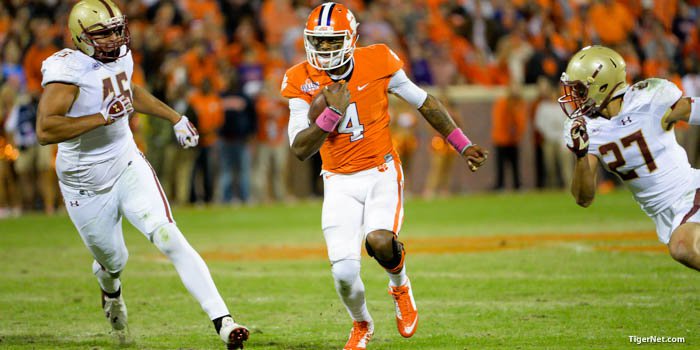 CLEMSON – Billed as a defensive effort, Saturday’s Homecoming contest against Boston College had plenty of big moments for both defenses but it was a big day from Deshaun Watson

Clemson plays at Miami next Saturday.

Boston College entered the game with the nation’s top-ranked defense, giving up an average of just 140 yards per contest – 98 through the air and 42 on the ground. The Tigers topped all of those marks with ease, rolling up 522 total yards.

Neither team did much with their first possession, but a Clemson miscue led to the game’s first score. On the Tigers’ second drive, Watson lofted a pass down the middle of the field but didn’t see safety Justin Simmons, who easily intercepted the pass and returned it 27 yards to the Clemson 20-yard line. Four plays later, Jeff Smith tossed a five-yard pass to fullback Bobby Wolford for a 7-0 Boston College lead.

The Eagles forced a three-and-out on Clemson’s third possession, but a roughing the punter penalty brought the Tigers back out onto the field. The next play was a quick slant that Artavis Scott turned into a 50-yard gain the Eagle 10-yard line. Three plays later, Watson bounced in from four yards out to tie the score at 7-7 with 5:25 remaining in the first quarter. It was the first touchdown scored by a Boston College opponent in 10 quarters.

The Tigers added a 42-yard field goal by Greg Huegel

Midway through the second quarter, the Tigers put together one of their most impressive drives of the season. Following a BC punt, Clemson took over at its own 20, and an early penalty had the Tigers facing a 1st-and-20. However, Clemson went on an 11-play drive that took 5:39 off the game clock. Facing a 4th-and-1 at the BC 21, Watson rolled right and hit Zac Brooks

Boston College took advantage of another Watson interception right before the half, kicking a 21-yard field goal with three seconds remaining as Clemson led 17-10 at intermission.

Clemson stopped Boston College on the first possession of the second half, and the Tigers responded on their first drive with a 39-yard Huegel field goal for a 20-10 lead with 8:52 remaining in the third quarter. It was a nine play, 69-yard drive that took 3:07 off the clock.

The Tigers forced a BC punt on the ensuing drive, but the punt was downed at the Clemson two. It took the Tigers just six plays to march 98 yards for the score, with Watson hitting Scott on a pretty throw-and-catch down the right sideline to complete a 51-yard scoring play. Huegel added the extra point and Clemson led 27-10 with 4:20 remaining in the third quarter.

Clemson put the game away with another long drive midway through the 4th quarter, using a roughing the passer call on third down to keep a nine-play, 85-yard drive alive. The key play was a 67-yard pass to Deon Cain

Boston College scored on a one-yard run by Smith with 1:29 to play for the final score.

Clemson vs. Boston College Box Score
Comment on this story