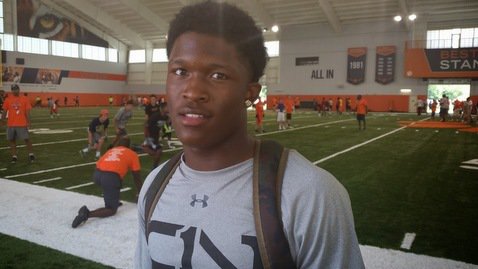 View Full Profile III Monday evening added a little more shine to a 2015 recruiting class that is currently ranked third nationally by ESPN and has 12 players listed on ESPN’s Top 300.

View Full Profile , meaning the Clemson coaches have once again dipped into Florida for talent. All three being from the same area means Clemson took three top talents (Cain is ranked No. 25, Fruhmorgen is 95th and McCloud is No. 150) out of the backyard of both Florida and Florida St.

How were they able to do that? You have to start by crediting Jeff Scott

Tony Elliott
Assistant Coach / Running Backs
View Full Profile . Clemson has always recruited well in the Jacksonville area of Florida because Jeff Scott and Brad Scott have built some solid relationships in that part of Florida, and those relationships have paid off handsomely with players like C.J. Spiller.

However, Elliott is proving to be one of the nation’s top recruiters and his presence in the Tampa area has been a boon for the program. He snared wide receiver Artavis Scott out of Tampa during the last recruiting cycle – Clemson’s first get from that area in recent memory – and has now added three Top 300 players for the next recruiting cycle.

The Tigers have been known to reach into Florida and take some of that state’s best talent – Spiller, Jacoby Ford and Sammy Watkins are former Sunshine State standouts, while the current roster is dotted with Florida natives, including Mackensie Alexander, Jayron Kearse, Travis Blanks, Artavis Scott, Tavaris Barnes and Tony Steward.

Of course, Clemson’s success in reaching the players in the far reaches of Florida can also be credited to Spiller. Spiller picked Clemson – a shocker to some – in 2006 and helped Clemson to a No. 13 recruiting ranking, along with Ricky Sapp and Byron Maxwell.

Spiller’s presence didn’t pay immediate dividends – the Tigers finished 18th in 2007 (the Willy Korn and Marcus Gilchrist class), but the Tigers earned a No. 2 overall national ranking in 2008 with Da’Quan Bowers and Florida natives in Kyle Parker and Jamie Harper.

Tommy Bowden
Head Coach
View Full Profile , and Spiller tallied just 45 carries in the first six games of 2009. Bowden was let go following a dismal 12-7 loss at Wake Forest, and Swinney vowed to get Spiller more touches and more involved in the offense. Spiller ended the year by getting 61 carries over the final six games, and the Spiller legend began to grow and young players in Florida began to take notice.

As mentioned before, the Tigers have been able to dip into Florida for some if that state’s top talent, and whenever we’ve interviewed those top players as recruits, they’ve all mentioned that they first took notice of Clemson because of Spiller and then Watkins.

Who will the next great player out of Florida be for the Tigers? Who will be the one player that other Florida natives look to as a reason to attend Clemson? Kearse has the talent. Alexander has the attitude. Scott has the moves. Or, a Fruhmorgen could come in and change the way the players in the trenches look at Clemson. Cain could be an NFL-type talent. McCloud’s athleticism might lead the way.

The Tigers have extended offers to several of that state’s top talent for 2016, and Scott and Elliott and Dan Brooks

Dan Brooks
Assistant Coach / Defensive Line
View Full Profile (who took over the Ft. Myers area for Elliott) will continue to mine the state for potential gems. Enjoy the ride, because it’s probably just started.