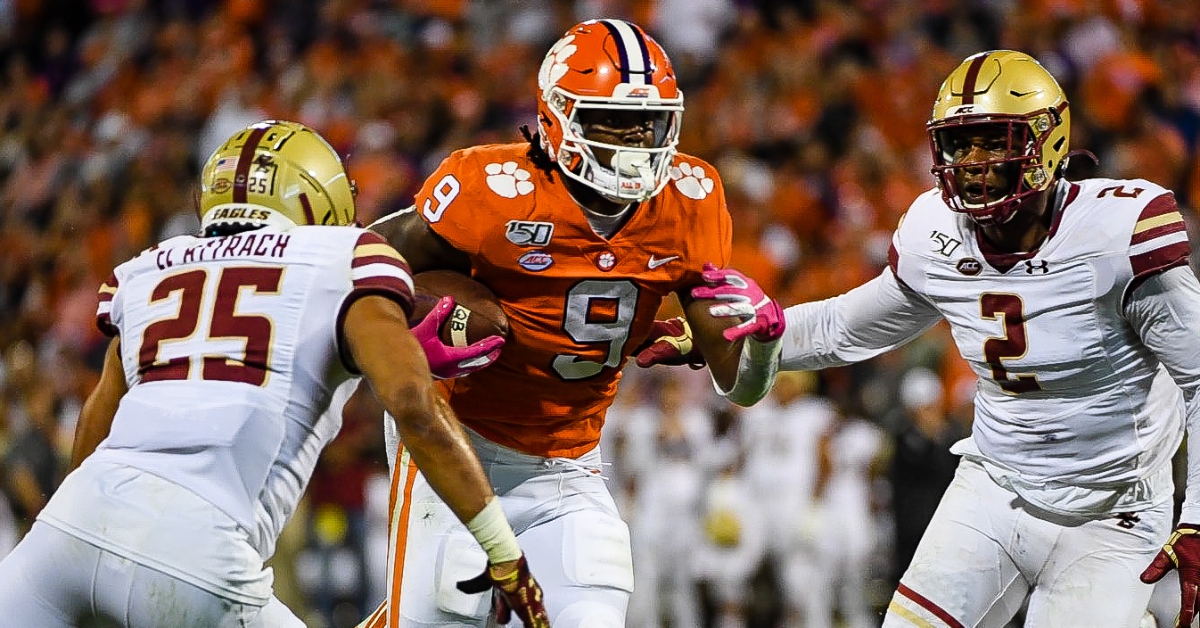 CLEMSON – The Tigers keep on rolling.

Clemson scored on its first six possessions and once again emptied the bench early in a 59-7 domination of Boston College in Death Valley Saturday night. Clemson improves to 8-0 overall and 6-0 in the ACC, while Boston College drops to 4-4 overall and 2-3 in the league.

Trevor Lawrence played two drives into the third quarter and finished his day 16-of-19 for 275 yards and three touchdowns. Running back Travis Etienne gained 109 yards on 16 carries, his third consecutive 100-yard game. Diondre Overton had three catches (all touchdowns) for 119 yards. Overton entered the contest with four career touchdowns.

Clemson has held eight straight opponents below 300 yards of total offense for the first time since 1956.

The win was also a ninth consecutive against Boston College, dating back to 2011.

Boston College took the opening kickoff and punted after just three plays. Clemson’s first drive ended with a 23-yard from B.T. Potter, but Lawrence missed a wide-open Tee Higgins in the end zone on third down and the Tigers had to settle for a quick 3-0 lead.

The Eagles were forced into another punt and the Tigers took over at their own 25. Five plays (and two pass interference calls) the Tigers found the end zone, with Travis Etienne bowling in from three yards out as Clemson took a 10-0 lead with 6:57 to play in the first quarter.

The Eagles’ hurry-up offense went into hurry up and punt mode on the ensuing possession and Clemson once again took over at its own 25 after a punt. This time it took just three plays for the Tigers to score. A 21-yard pass to Higgins opened the drive, Lyn-J Dixon got free for 32 yards, and Diondre Overton ended the drive with a 22-yard scoring reception. With a little over four minutes to play in the first quarter, Clemson led 17-0.

It took Clemson just seven plays to answer. A 24-yard completion to Ross and a 30-yard run by Etienne set up Etienne’s four-yard scoring run. With 10:29 to play in the second quarter, Clemson led 24-7. This marks Travis' 13th game with multiple rushing touchdowns since joining Clemson in 2017, tying Wisconsin's Jonathan Taylor for second-most in the country in that span. Former FAU RB Devin Singletary still has the most with 17 from 2017-18.

Clemson had one final shot before the half, taking over at its own 16 with just over three minutes to play. The Tigers marched 84 yards in 11 plays and Etienne capped the drive with a five-yard scoring run, and with 31 seconds left in the half Clemson held a 38-7 lead.

Clemson punted for the first time all night to open the second half and the Eagles gained two quick first downs on the ground. The fourth play was a disaster, however. Eagle quarterback Dennis Grosel dropped back to pass and was hit by linebacker Chad Smith. The hit knocked the ball loose and defensive end Logan Rudolph scooped up the loose ball and rumbled 39 yards for the touchdown. With 11:18 to play in the third quarter, Clemson led 45-7.

The Clemson defense forced a sixth Boston College punt and the Tigers took over at their own 20. Etienne started the drive with a 17-yard run to put him over 100 yards on the night. On the second play, Lawrence rolled left and hit Overton on the sidelines. The defender went for the ball and fell out of bounds and Overton raced 63 yards for the score and a 52-7 Clemson lead.

Clemson took over at its own four late in the third quarter and drove all 96 yards on 11 plays in just 4:24. The final play was a screen pass to Overton, who took it 34 yards to the house for this third score of the night. With 13:37 to play in the game the lead was opened up to 59-7.

Clemson hosts Wofford next week at 4 pm on the ACC Network.

Clemson vs BC Box Score
Get the latest Clemson gear right here!
Comment on this story