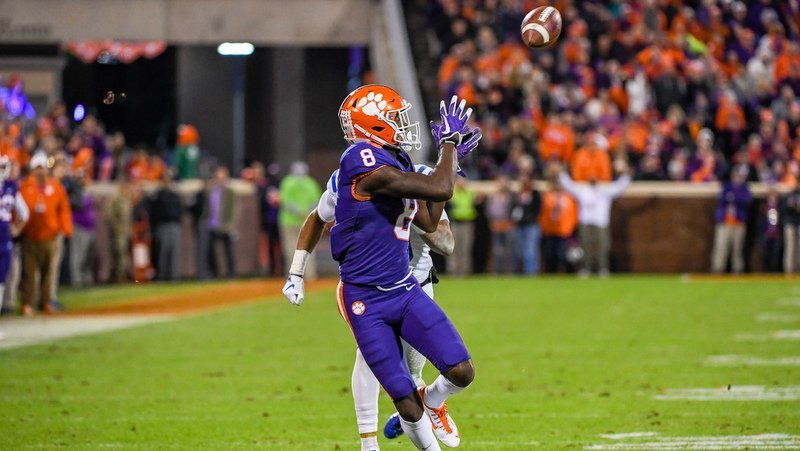 CLEMSON – Second-ranked Clemson’s victory over Duke was barely an hour in the books and many of the Tiger players said they are already thinking about next week’s rivalry game with South Carolina.

The Gamecocks (6-4) and Tigers renew acquaintances next weekend in a 7 pm kick in Death Valley. The Tigers have won four in a row in the series by a combined scored of 162-64. The Tigers are chasing a 12-0 record, another ACC Championship and a berth in the College Football Playoff, and the Gamecocks would love nothing better than to dash a few of those dreams.

For senior kicker Greg Huegel, who grew up in the Columbia area, the rivalry means something.

“Honestly, it's personal. It makes me want to focus more on a day-to-day basis whether I'm out at practice or from kick to kick mainly because I've got a lot of buddies that go there,” Huegel said. “Say I miss a field goal or if it's a close game, no matter what, I'm going to hear about it at the end of the day. It's really just staying focused and getting the job done.

“I get a lot of people talking crap, but it is what it is.”

Huegel said he hopes to finish his Clemson career undefeated against the Gamecocks.

“It would be awesome. Once again, knowing the guys down there, that's something I can always say to them,” Huegel said. “Regardless, it would be awesome if we do win next weekend but once again we've got to treat it like the biggest game of the year. We've got another goal to win and that's to win the state championship. We're going to take it a day at a time and the first step is practice on Monday.”

He then said that Clemson plays to a standard, not the opponent.

“Honestly, not really just because Coach Swinney always emphasizes that every single week is the biggest game of the week,” Huegel said. “What's allowed us to be successful up to this point is that we've kept that mindset. The fact that Clemson plays to a standard, not to an opponent is really cool because we get the same exact atmosphere every single week whether it be at practice or meetings.”

“Not really much different for us. I know it's kind of amplified for everyone else in this state. Obviously, this is the state championship,” Ferrell said. “The fans are obviously not very fond of each other. It's a lot of history between us but we just want to treat it like another game. We know it's kind of personal and you want to go out against your so-called rival in the last game of the season. It's going to be a good game. They're a very good team and they have a lot of good players. We just have to go out and prepare. We have to have a great week of practice.”

Freshman wide receiver Justyn Ross grew up in the shadow of the Auburn-Alabama rivalry, and he said he’s been told that Clemson-South Carolina is its equal – or better.

“They told me it's just like the Auburn-Alabama rivalry but probably even better,” Ross said. “I'm looking forward to next week. They said the environment is crazy in the Clemson-South Carolina rivalry. I talked to Tee and Diondre about it and they said it's a way different environment.”

Freshman quarterback Trevor Lawrence is looking forward to the hostility.

“It's a big game. I'm just going to have a good week of preparation and get ready for it. It would mean a lot to me,” Lawrence said. “The biggest thing is it's the next game. That's one of our goals to win every game we play against them. It's the next game but it's a big game because it's against South Carolina but it's another team that's in the way of what we're trying to do. It would mean a lot to help these seniors never lose to South Carolina. It would be awesome.

“I'm not from here so I don't know a ton, but just watching it on TV when they were at South Carolina, I saw the hostility and the atmosphere and how the game went. Anyone who is watching can tell it's a pretty intense rivalry.”

“I really don’t have much to say about South Carolina. It’s another game. At the end of the day, we play Clemson,” Huggins said. “As long as we don’t lose to Clemson, we’ll be fine. It’s just business. I grew up thirty minutes from Columbia. I visited USC a lot. It’s just another game for me. It’s another opportunity to go out there and play for my brothers and show my talent off.”