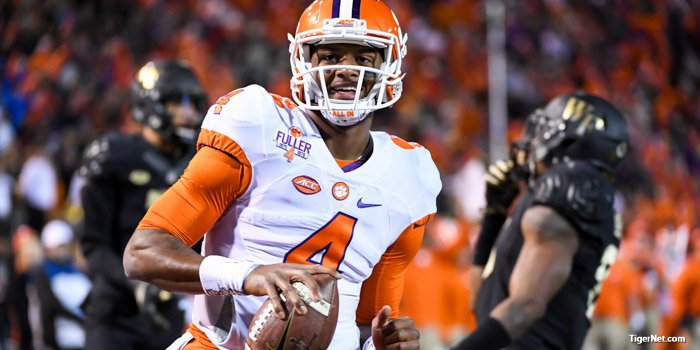 Jordan Leggett had an early catch that softened up the defense

WINSTON-SALEM, NC – Saturday night was all about balance.

A week ago the Clemson offense rolled up over 600 yards of offense, but 580 of those yards came through the air in a record-breaking performance. It was also a loss.

In a 35-13 victory at Wake Forest Saturday night that clinched the ACC Atlantic Division title, the Tigers finished with over 200 rushing and 200 passing yards, the fourth time that’s happened this season. The program is now 79-0-1 all time when posting 200 of both in the same game.

“I'm definitely pleased with the balance. I think it was one of our best rushing nights of the season,” co-offensive coordinator Tony Elliott said. “Coming in we knew we were going to be challenged up front with the way Wake Forest played, so it was good to see our guys start the game fast running the football and staying balanced.

“We want to see a little more consistency at the start of the third quarter. We put together some drives and then we stopped ourselves on third down, but when we needed to have a big drive and score some points to put the game out of reach they were able to run the football down the field. It was a 13-play drive and we threw it two times. I'm very pleased with where the running game was tonight.”

Clemson rushed the ball 42 times for 254 yards, and center Jay Guillermo said it was all about dominance. 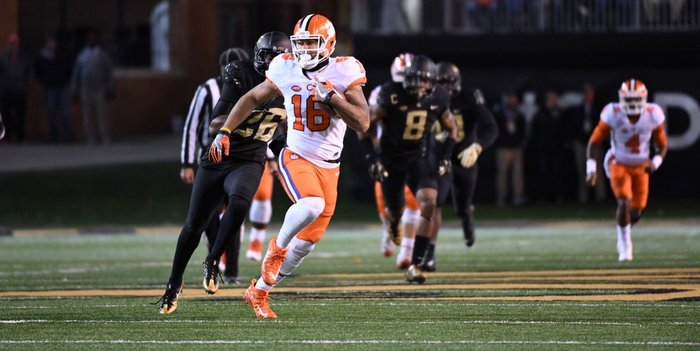 Jordan Leggett had an early catch that softened up the defense "

Running back Wayne Gallman set the tone with an early 42-yard touchdown run.

“It was huge,” Elliott said of the run. “A big run like that on the opening drive and fourth-and-one and they've got a loaded box with another hat, he makes a guy miss and spins for a long one. It was really good for his confidence and our confidence overall and it really gave us the spark that we needed, especially from the run game standpoint.”

Elliott said he thinks some of the criticism leveled at the offense after failing on third and fourth down last week against Pitt was unfounded.

“I think a lot of times people just look at statistics. In the run game, we had a lot of runs called but we knew with the structure that Pittsburgh had they're going to have one extra that we had to exploit the perimeter,” Elliott said. “Tonight, they did a better job of taking away the perimeter run and said when you call a run you're going to have to hand it off. Hats off to those guys. We had some different schemes that we had been working that they took ownership of and we found some success.”

And found that balance they’ve been looking for.

“We knew that coming out of last week's game that we had a lot of called runs but it turned into passes. We knew they weren't going to give us the perimeter screens to keeps us honest in the run game so we were going to have to force the issue,” Elliott said. “We came into the game saying that when we're at our best is when we can be balanced and run the football when we want to, run it effectively and throw the football. We came into the game with a plan to run both of them and then Wayne got hot. One of the things that I take a lot of pride in with this offensive staff is there are no egos involved and we're going to do what's working and if Wayne is the hot guy we're going to feed him.”

Elliott downplayed any thought that the Tigers put more emphasis on the run game this week – it’s still all about what the defense gives you.

“Not any more than normal. When we come into a game, we want to make sure we're sound,” he said. “In the running game, it's about numbers and angles and we're always trying to find a way for us to have the advantage, but defenses are doing a really good job of scheming your run schemes and getting extra hats.

“We also told the backs that this week you're going to have opportunities and we'll get you to the safety but you've got to win one-on-one and in the hole. When you go back and watch the film I'm pretty sure you're going to see that Wayne broke a lot of tackles at the line of scrimmage and the unblocked safety.”