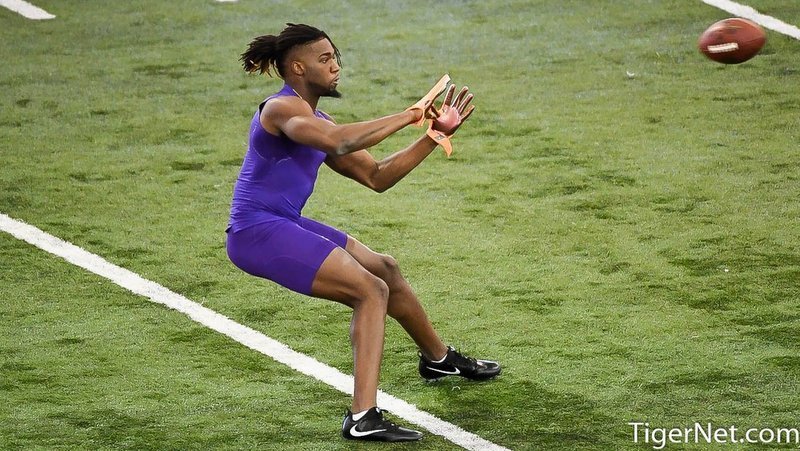 CLEMSON – There is a reason Deon Cain’s draft stock is rising, and that reason was on full display Thursday morning inside Clemson’s indoor practice facility.

Cain and several other former Clemson players worked out for NFL Personnel at the Tigers’ Pro Day Thursday and a good bit of the attention was on Cain. Following the workout, he sat down at a table for an exclusive interview with TigerNet, and it was obvious this Deon Cain is different than the one that showed up three years ago.

He’s poised. He’s always had confidence, but it’s now not the brash cockiness that comes with youth but the quiet understanding of a man whose livelihood is on the line. Physically, he looked different. In the lexicon of today's youth, he looked “swole.” He’s bigger and stronger but hasn’t lost any of his speed or quickness.

In other words, he looks like the prototypical NFL receiver – big body with speed. The 6-foot-2, 202-pounder made an impression at last month’s NFL Scouting Combine in Indianapolis. He caught the ball well and was very smooth in and out of breaks, finishing fifth in the three-cone drill (6.71 seconds) among all receivers. He also ran a 4.43 40-yard dash. If he was flying under the radar before the Combine, he isn’t anymore.

Scouts from the Arizona Cardinals spent several minutes talking to Cain after the session Thursday, and he told TigerNet that he was on a mission to show he can help an NFL team.

“There were a lot of questions about my route running and catching the ball,” Cain told TigerNet. “I had to show them I could catch the ball and run efficient routes. I was limited at Clemson because of the route tree we have because we don't have that many routes, but I wanted to show them I could be good in my routes as an inside or outside receiver. I wanted to prove that at the Combine and today.”

He said he knew after the season that he was ready for the next level.

“I knew after the last game against Alabama. I felt confident in what I had put on film in that game and throughout the season,” Cain said. “I felt good with everything. But after the season I knew I was ready for the next level and the next step.”

“Coach (Dabo) Swinney was actually looking for me to make that next step, and he was supportive in everything,” Cain said. “He told me I was going to be a better pro than I was in college because I've only been playing this position for three or four years, and being the hard worker I have the chance to be great after that. “

Cain went to Arizona to hone his skills.

“I went up there to get better in my 40 and my techniques,” he said. “Here at Clemson, they really set the base. I already knew how to lift weights and all that stuff. I just wanted to focus on the 40, and they got me right for that.”

Cain told me he hears from different teams, and he doesn’t care which team chooses him or the round – he’s just ready to go make plays.

“All of them are keeping in contact,” he said. “I just want to get on a team. That is my mindset right now.”