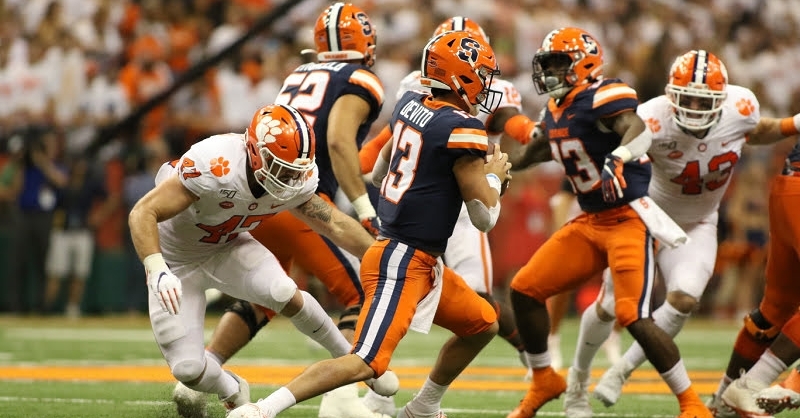 SYRACUSE, NY – The Syracuse motto the week ahead of the visit by top-ranked Clemson has been “Nobody believes in us but us.” Well, there was a reason for that.

Clemson’s defense recorded eight sacks and Trevor Lawrence threw for 395 yards and three scores as No. 1 Clemson defeated Syracuse 41-6 in front of the third-largest crowd in Carrier Dome history. Clemson improves to 3-0 overall and 2-0 in the ACC while Syracuse falls to 1-2 overall and 0-1 in the ACC.

Lawrence completed 22-of-39 passes for 395 yards and the three scores but also threw two interceptions. Travis Etienne carried the ball 14 times for 76 yards to lead the rushing attack. Clemson racked up 612 total yards – 391 through the air and 221 on the ground.

Syracuse ran 71 plays for 187 total yards, an average of 2.63 yards per play. Syracuse had 42 rushing attempts for 15 total yards.

Each team punted on its first possession but the Tigers went right to work on their second possession. Lawrence threw a ball up that Tee Higgins high-pointed for a 16-yard gain on third down, and a few plays later Amari Rodgers took the top off the defense and gathered in a 16-yard pass in the end zone for a 7-0 Clemson lead.

The Tigers forced another Syracuse punt and went right back to work. Lawrence hit Higgins again – this time for 35 yards – and then the running game went to work. Lawrence finished off the drive with a one-yard scoring run and Clemson led 14-0 with just over six minutes to play in the first quarter.

The second quarter was a sloppy affair as the Clemson offense abandoned the run game for a purely vertical look. Syracuse hit two field goals and Clemson hit one and led 17-6 at intermission.

Clemson forced a Syracuse punt – a punt that covered 65 yards – and started its first possession of the second half inside their own 10. Two Etienne runs netted 16 yards, but the third play was a pass that was intercepted by Syracuse and returned to the Clemson nine.

Clemson promptly returned the favor – Syracuse Tommy DeVito was flushed from the pocket and threw a pass into the waiting arms of Mario Goodrich at the Clemson four-yard line. Two plays moved the ball out to the 13, and on third down, Lawrence tossed a screen to Rodgers. Rodgers broke a tackle and then broke loose down the sideline, outrunning everybody to complete an 87-yard touchdown reception as the sellout crowd groaned in disbelief. With 9:42 to play in the third quarter, Clemson led 24-6.

Clemson forced another punt, but Lawrence threw his second interception of the night – an awful throw – that was returned to the Clemson three-yard line. Four times the Orange took a crack at the end zone, and four times they were repulsed. DeVito was stopped on fourth down at the two.

With their backs against the wall, Lawrence took off for a 25-yard gain on the first play of the drive, and the second play as a 50-50 ball that Justyn Ross came down with for a 48-yard play. The Tigers appeared to score on a touchdown pass to J.C. Chalk two plays later, but it was called back for holding and the Tigers settled for a 37-yard field goal from B.T. Potter. With 2:24 to play in the third quarter, Clemson led 27-6.

The Orange got desperate on their next drive. Facing a 4th-and-3 at their own 33, the Orange elected to go for it and DeVito was sacked for an 8-yard loss. It was Clemson’s eighth sack of the night, and Clemson took over at the Syracuse 25. The Tigers missed a field goal and the score stayed at 27-6.

Clemson added a score early in the fourth when Lawrence hit Frank Ladson on a 7-yard pass in the endzone. Ladson caught the ball falling backward and out of bounds, but held on to make it 34-6 Clemson.

Clemson put the finishing touches on the evening with a 57-yard touchdown run by Chez Mellusi with just over a minute to play.

The Tigers return to Death Valley next week, hosting Charlotte. Kickoff is set for 7:30 PM and will be broadcast by the ACC Network.

Clemson vs Syracuse Box Score
Get the latest Clemson gear right here!
Comment on this story