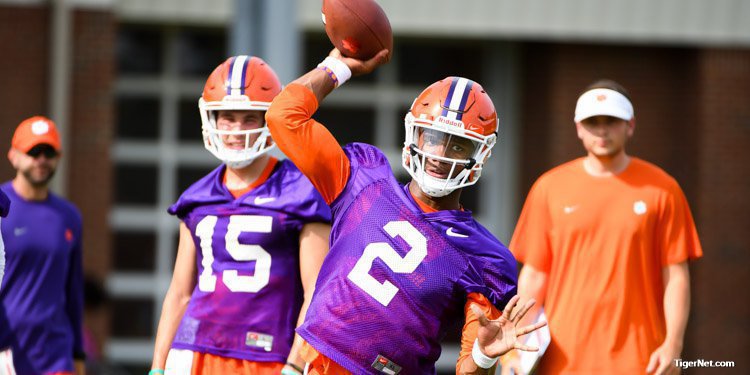 Lawrence had a screw inserted into his toe over the summer.

CLEMSON – The first day of fall practice is in the books, and we have a few more team-related news and notes to pass along.

We will get started with defensive tackle Dexter Lawrence, who was happy and talkative with the media Thursday night. Lawrence covered a lot of ground, from his brotherly relationship with fellow defensive tackle Christian Wilkins to the toe injury we learned about earlier in the day.

Head coach Dabo Swinney told the media before practice that Lawrence had a screw inserted into his toe over the summer. The big man is wearing a small brace on his foot, and he said that he suffered the injury during the spring.

When I asked him when the surgery was performed – we saw him limping around at Swinney’s high school camp in June – he broke into a big smile and said, “A date.”

Lawrence admitted that his post-surgery ice cream eating habits got him up to 355 pounds, and he wanted to be at 335 for Wednesday’s weigh-in. He came in at 337, and said Wilkins can’t call him fat boy anymore.

*Quarterback Kelly Bryant was also comfortable with the media, and when I asked about his newfound confidence he told me just had to be himself.

“That’s something that I have really tried to focus on during the offseason just getting back to myself and just having fun with it and getting that confidence,” Bryant said. “That’s something that I try to preach every day that I come out here, in the meeting rooms and off the field, just having that confidence in my walk. It helps me so much more when I am confident and believe in myself. When guys see that I am confident, they can rally around it as well.” 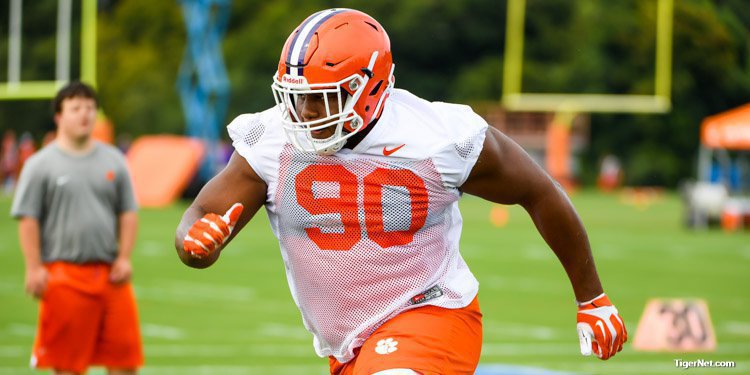 Lawrence had a screw inserted into his toe over the summer."

When I asked him about staying around last week and continuing to work out while many of his teammates went home, Bryant said nothing has been decided as far as the depth chart and he wants to make sure that no one outworks him.

I mentioned that in the past, he’s had an older quarterback to lean on for advice and I asked if he could still lean on Deshaun Watson or someone else, and he admitted he does have a mentor – former Clemson quarterback Woody Dantzler.

He said Dantzler helps him with the game, but spends more time on life and helping him become the best student-athlete he can be. We will have more on that relationship in a later story.

*I asked linebacker Kendall Joseph if he could tell us where he thought he would play this season – at Ben Boulware’s vacated WILL spot or at the MIKE spot he played last season – and he said we would have to ask defensive coordinator Brent Venables.

However, he mentioned that he spent most of Thursday’s practice at the weakside spot and he said he thinks sophomore Tre Lamar will be able to handle the MIKE (or middle) linebacker position.

*Freshman receivers Tee Higgins and Amari Rodgers spent time with wide receivers coach Jeff Scott following the practice while Diondre Overton ran extra routes (with Bryant) in the background. Both players have a long way to go, of course, but observers told us that Rodgers and Higgins were impressive in their first action.

Bryant said he noticed both players, along with fellow quarterback competitor Chase Brice. 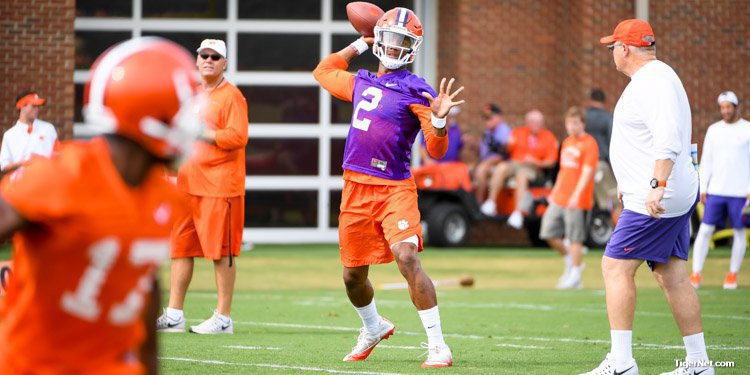 “Those guys can play. They know the offense,” Bryant said. “For a lot of guys, it takes time for them to get acclimated. Chase Brice also did a really good job today. He knows the protections and all the plays and everything. He is making the right reads. Coming out real fast, it is surprising to see those guys come out here and have a good showing.”

*I know that the offensive coaching staff does a self-study during the offseason, and I asked offensive coordinator Tony Elliott what was the one thing they took away from last season.

“We have to cut out the turnovers,” Elliott said. “The last team to win the national championship with a negative turnover margin was Miami in 1989, and then us last season. That is a long time in between those years, and we realize we have to cut down on the turnovers.

Elliott also said he wondered whether running back Tavien Feaster would be able to carry the 221 pounds he currently carries, and he said he was surprised at how well Feaster ran Thursday. Another running back that caught everyone’s eye was newcomer Travis Etienne, who showed great burst.

We asked Joseph which running back he hates to tackle, and he said Adam Choice.