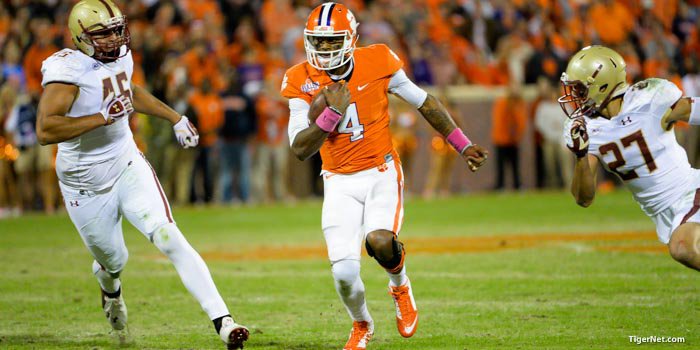 Watson finished 27-of-41 for 420 yards and three touchdowns against the top defense in the country.

Clemson’s dynamic sophomore quarterback wears the familiar No. 4 jersey made famous by former Tiger standout Steve Fuller, and his standout performance in Saturday’s 34-17 Homecoming win over Boston College made him the winner of the O’Rourke-McFadden Trophy.

Watson finished the night 27-of-41 for 420 yards and three touchdowns, but also rushed 11 times for 32 yards. He said the game plan was to take what the defense gave them.

“Each game has its own different way it plays out,” Watson said. “I just found some lanes and got the first down or got what I can. It really all just depended on what kind of defense they were running.”

The Tigers tried several deep passes in the first half, but Watson either overthrew or underthrew his receivers. It all came together when he hit Artavis Scott

“When I dropped back and released it I thought I overthrew him again,” Watson said. “But I kind of bent down and looked and saw him run under it for a touchdown. Really, in the first half I was too amped up and overthrowing the guys and not putting the ball where it needs to be. In the second half I came in relaxed and started putting the ball where it needs to be. I just started playing my game and having fun again.”

Boston College entered the game ranked as the nation’s top defense, giving up just 140.2 yards per game, and had given up just 592 total yards through the air through the first six games. Watson almost matched that output himself as the Tigers rolled up 532 total yards.

“It's not every game you get to play against the number one defense in the country. We had that opportunity and we wanted to show that we could score points and show what we have and that's what we did,” he said. “They (the Clemson coaches) have been doing a good job of putting me in the right position to make plays and find my receivers. My receivers have been doing a good job of finding the open void and getting open and getting the ball. They've been catching the ball and making plays after the catch. And the offensive line did a good job of giving me a little time and letting me release the ball. We are getting better each week.”

The Tigers stand at 6-0, but Watson said no one is satisfied with what has been accomplished.

“I feel good where we are, but I am not satisfied. No one on this team is satisfied, and 6-0 doesn't mean anything. It's just a record,” Watson said. “It's a one-game season for us. Now we are going to focus on Miami. For us this is just a confidence booster. We know that we can be very explosive. We missed a lot of opportunities in the first half that could have been touchdowns. It is little things we can fix. We can get back to the basics and details Monday and get better.”

The McFadden trophy winner and Dabo getting one last shot with the @TwitterMirror #Clemson pic.twitter.com/OZArUt0Fox