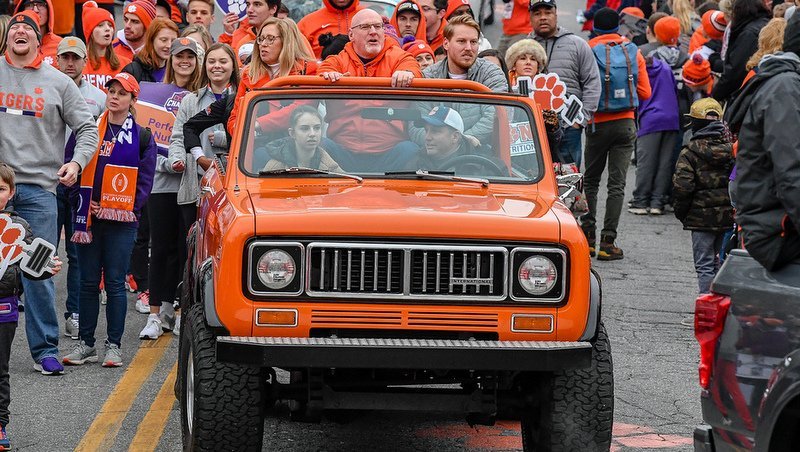 “Let me tell you something right now; they don’t put championship rings on smooth hands!”

The intense visage of Clemson strength and conditioning coach Joey Batson peered out at 80,000-plus people from the video board atop the Tigers’ iconic hill, and as his voice echoed throughout Clemson, everyone took notice.

No. 2 Clemson trailed Syracuse 16-13 as the third quarter ended in late September. Starting quarterback Trevor Lawrence was out, and the Tigers were down a few other starters. The crowd inside the stadium sat in shock, and there didn’t seem to be many answers on the Clemson sideline.

Then the “Why We Work” fourth quarter video started, and the stadium began to buzz.

“You win championships when the stadium is empty, when the band ain’t playing, when the cheerleaders ain’t cheering, when it’s just you and your brother, right beside you.”

“That’s when you win championships! In the fourth quarter, that is when we shine!”

The crowd roared, the Tiger players had a renewed sense of energy and urgency, and Syracuse’s players and coaches almost visibly slumped. The game wasn’t over – it would take a late drive for the Tigers to get the win – but many players told TigerNet later that the video set the tone for the fourth quarter and the win.

Batson says he noticed the change in both teams during and after the video, and he felt the energy from the crowd.

“I did. I always think to myself it might be motivation for the other team, too,” he said. “I always think that if I am on the other sideline, I might grit my teeth a little bit, but it was really special, and I don't know that it could ever be duplicated. A very special video, moment, and year.

“I kind of take a deep breath, and I look up there, and I think, 'Who is that guy?' It makes what little hair I have on the back of my neck stand up,” Batson said. “I am proud, not for me, but I am proud for our guys and for our fans and proud for our team. That is what I have always told them - it's about our team and about what we do.”

The video isn’t all hype and no substance, however.

“There is a lot of truth in that video. Nobody sees the dirty work, and that's what we do,” Batson said of his staff. “This whole process has to start again, and there are a lot of early mornings with the winter workouts, and then we have the offseason with the All In Drills and then spring and then right back into the summer. It's year-round.”

The fourth quarter videos have become a staple at Clemson home games.

“Our Creative Solutions department produces it every year and the primary editor for this year's version was Alex Mueller (undergraduate student); other people involved in the production were Nik Conklin, Andy Turner, Carly Cough, Jeff Kallin, Mark Majewski, and Madison Williams,” said Jonathan Gantt, who is the Associate Athletic Director for Creative Solutions. “The title every year (dating back to our first one in 2014) is "Why We Work" -- the idea is that the reason why the players work so incredibly hard during winter/spring/summer is so that they can shine when those big moments happen. The video is meant to get the crowd pumped up but also to remind the players -- you prepared for this moment. You made all the sacrifices. Now go embrace the moment. This is ‘why we work.’

“This was our fifth year doing the "fourth quarter video" -- Nik Conklin made the first one and has supervised the production on all of them. Every year, we try to make it the best it can be, and we were looking for something else to take it up a notch, and that's where the idea came to feature Coach Batson. He's always been a major feature of the videos because he's the one directing the offseason workouts, but this was the first time we had him give a speech.”

“His pregame speeches to the team are so intense and so awesome, and so we knew him giving a motivational speech would be a perfect way to raise the bar for the video this year,” Gantt said. “And boy, did he raise the bar! Coach Batson wrote a great speech and performed it brilliantly. He is a world-class motivator, the players love him and respond to him, and it was awesome to see the crowd/fans respond to him this year, too. I can't tell you how many times we're around the office and someone will start fake yelling, ‘when the cheerleaders ain't cheering!’ or ‘that's when you win championships!’”

Batson says he is proud of the final product.

“I was asked to put something together, and I said let's go, and we will give it a run. Took one take,” Batson said. “I told everybody that what we needed to go was get everybody behind me and let me kind of present like I am presenting to the team, and when I did the shoot it was all dark, but in my mind, the team was in front of me and acting like I was talking to them. We did it in one shot, and I dropped the mic and walked out and kept going.”

Gantt says he has a couple of stories about the videos that are his favorites.

“It’s hard for any of us to say the "impact" it had on opposing teams, but it's always one of our favorite moments of every home game -- wherever we are in the stadium, we all make sure we get somewhere we can see the video board and hear the crowd,” Gantt said. “I have a couple favorite "fourth quarter" video stories. First was that fans in the Clemson section at the Russell Athletic Bowl in 2014 pulled the video up on their phone after the third quarter and all started to chant "This is why we work!" as we entered the fourth quarter.

“Another came from a couple years ago when we were in an offseason photo shoot with Deshaun Watson prior to the 2015 season and he was talking to us about how he had met DeShone Kizer (the quarterback from Notre Dame) at an offseason event and Kizer asked him what it was like playing in Death Valley -- Deshaun's response was ‘just wait until you hear everybody go nuts when they play that fourth quarter video.’ That was a cool moment when we realized how much it impacted on players.”

And yes, there was an impact during the win over Syracuse.

“And Coach (Dabo) Swinney this year referencing how he knew we were going to win that Syracuse game because he saw all the players getting jacked up when they saw Coach Batson giving the speech on the video board,” Gantt said. “We used it for our ‘team entrance’ video at Media Day for the National Championship, and that was pretty funny to hear Coach Batson doing his intense speech with all the media wondering what was going on. And then seeing the Clemson fans at this year's national championship yelling ‘this is why we work’ when it played pregame before the team ran out was a special moment, too.”