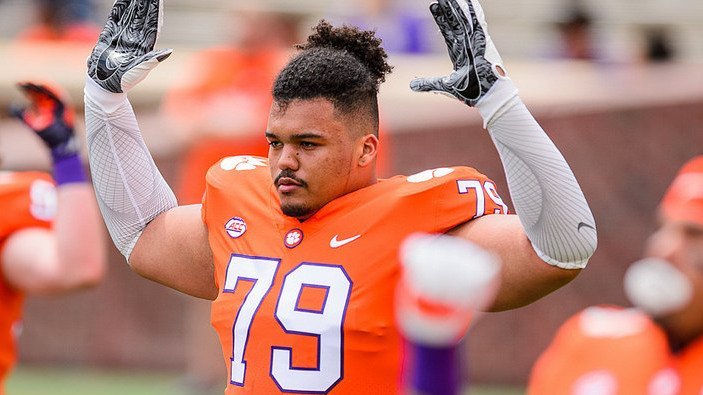 Carman stretches before a spring scrimmage

SUNSET – Jackson Carman was one of the crown jewels of the 2018 recruiting class and enrolled early at Clemson so he could take part in spring practice. While many might wonder what happened with Carman, offensive line coach Robbie Caldwell told the media last week that Carman is progressing.

That includes losing weight and understanding more of the offense.

“Well he has lost weight and he’s down close to 20 pounds, so that’s really helping. It’s gonna help him be able to bend better,” Caldwell told the media last week at head coach Dabo Swinney’s media golf outing. “One thing that’s impressive about him is he played guard and tackle. Just getting here in January and doing a good job mentally. Obviously, he didn’t face as many stunts and blitzes working with the third group as much as the older guys did. He’s making progress in that regard.”

Many expected Carman – because of his status as a 5-star – to jump into the mix as a starter or main backup in the spring, but Caldwell reminded the media that learning the intricacies of the offensive line takes time.

In other words, Carman is still a freshman.

“Well, the people. The people do because they read what y'all write,” Caldwell said when asked what held Carman back. “He’s ranked whatever, I don’t even pay that stuff any attention. As a matter of fact, I wish they didn’t do it because it screws a kid’s heads up and everything. He was ranked so high up, but he’s a freshman. He has to start all over. He’s a JV player working his way up again. You know the talent level that you go against, the number of people in the stands, all of these things have an effect. You think about it, the biggest crowd that kid has ever played in front of is maybe 10,000 people.”

Caldwell said he was pleased with how Carman has handled losing weight.

“We are still working to get him down. He’s still a little bit heavy but he’s working at it,” he said. “He’s really learning to adjust. Having all this food is just – you have to be able to say no. I am living proof of it. You can’t outwork a bad diet.”