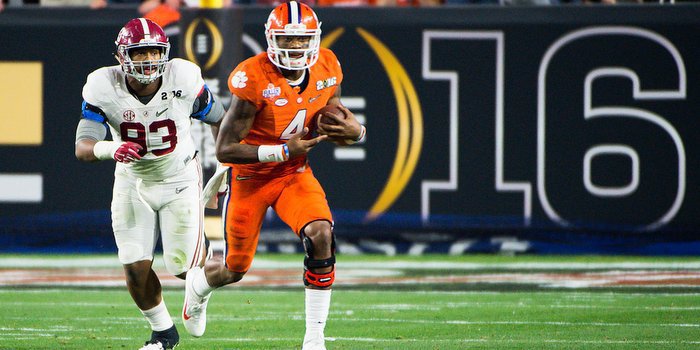 Alabama's defense has excelled at creating turnovers this season

What happens when the irresistible force meets the immovable object?

Herbstreit will call Monday’s National Championship Game between Clemson and Alabama, along with play-by-play announcer Chris Fowler. Thursday, the duo answered questions about the matchup and what Clemson has to do to move Alabama’s defense.

“Number one, there's so many things there. Clemson's offense has an ability, because of the system and the quarterback, to score on anybody that they play, providing that Deshaun (Watson) is kind of on. Last year he was, what, 30 of 47, for 405 yards and four touchdowns against them. They had ample amount of time to prepare for them,” Herbstreit said. “When I watch 'Bama, the one thing they've kind of been spoiled with, is they have an ability to stop the run, and keep two safeties deep to prevent any kind of deep passes downfield. That's kind of an oxymoron in today's college football, when you have an ability to keep two safeties back, and also at the same time stop the run. They did it against Washington. Did not have a quarterback run game.

“If they do that against Clemson, you'll see Deshaun Watson run it 20 to 25 times until they get out of that look, then they can start to throw the football. That will be a little bit of a game within the game, is how Alabama is going to try to play with their safeties, and whether or not they can stop the run and take away the deep ball at the same time. If they're effective in doing that, Clemson will punt, like Washington did, almost every series. You got to make them pay for that would be the big thing.” 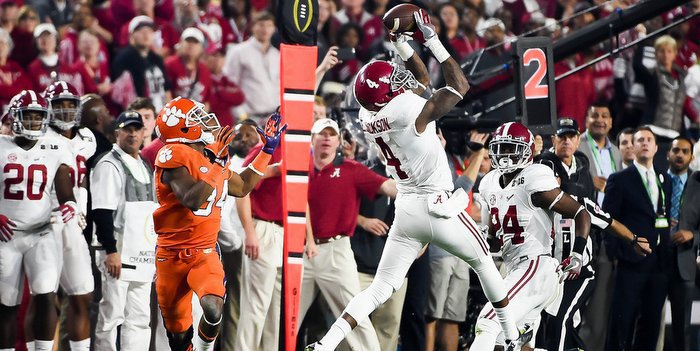 Alabama's defense has excelled at creating turnovers this season"

Herbstreit said he thinks Watson will run more than usual as Clemson tries to keep the Alabama defense honest.

“Just getting Deshaun Watson into his flow, which means to me running and throwing. I expect him to carry it at least 20 times in this game,” Herbstreit said. “I think the matchup on the perimeter against Humphrey and Averett, the other corner, will go a long way in determining how this game goes as well.

“The ball is going to have to get out fast because of that pass-rush. That means the receivers have to work their tails off to get open and get separation.”

Fowler said he understands how good Alabama’s defense has been this season, but he also thinks Clemson’s offense doesn’t get enough credit.

“I don't see why they wouldn't move the ball and score points. Alabama came off a shutout in last year's semifinal. Clemson lit them up,” Fowler said. “They didn't have Mike Williams or Deon Cain in that game. When you look at Monday night, the two most dangerous receiving weapons potentially, Cain isn't as productive or consistent as Leggett, but he certainly has the ability, those guys weren't even out there last year, especially Williams, who is a complete difference maker.

“Deshaun, as Kirk said, has to be sharp, pre-snap, post-snap, process things as quickly as he did against Ohio State, which is a serious challenge. At times they made it look really easy, but it isn't easy to do what he did. His mind works very quickly. The execution is amazing, as good as we've seen in this sport.

He throws picks; that's what he has to be worried about. You cannot get baited into interceptions. You cannot give Alabama a defensive touchdown. Every opponent goes into the game saying the same thing, yet they fall prey to it. Washington makes a bad decision, throws a ball out there in the flat. Anderson takes it back to the house. It's a different game right before halftime. That's the kind of mistake that teams make again and again with them.”

However, Watson has to take care of the football, and that includes the interceptions.

“Deshaun has made them pretty frequently. They overcame a couple of interceptions. That's not a good formula to try to do against Alabama,” Fowler said. “I think that there's probably some sleepless nights and some anxious moments on the Alabama side as they get ready for this offense, knowing what happened last year.”