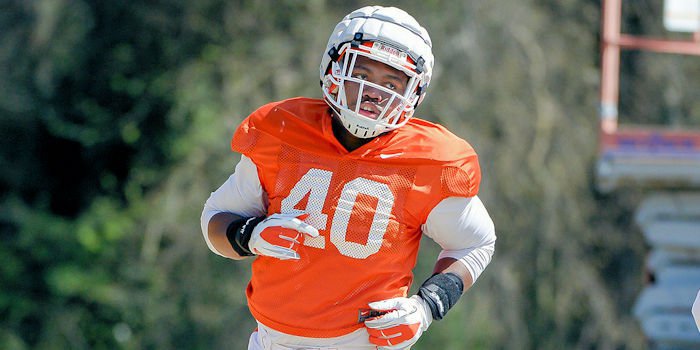 Rod Byers is used to being patient when it comes to life and football, but the last week would test even the patience of the Biblical Job. Byers isn’t giving up, however, and will continue to chase his NFL dream.

The former Clemson defensive tackle arrived at Clemson after springing a National Signing Day surprise in February of 2011. Byers had committed to Oregon in a press conference at his school a week earlier, with former Ducks head coach Chip Kelly looking on. Byers shunned the Ducks, however, and signed with Clemson on the big day.

His Clemson career didn’t quite work out as expected, and he played just 348 snaps over 29 games as he battled for a spot on the depth chart in the rotation. He even spent time at tight end in 2014 as the Clemson coaching staff tried to put a little punch in the running game.

Byers isn’t bitter about how it all turned out, however. It’s all a part of the plan of a higher power.

“I didn’t really get good and turn into a good football player until my senior season,” Byers said Wednesday. “At that point, there were guys who had passed me on the depth chart, and they had already proved themselves. I get it and I understand it. I didn’t even play in the National Championship game, but I never stopped believing in myself or my abilities. I told myself to just keep working.”

The Carolina Panthers liked Byers enough to invite him to rookie camp, and Byers impressed the coaches with his work ethic and athletic ability. Following rookie camp, the Panthers’ message was simple – stay close to the phone and if we need you we will call you.

Byers waited patiently on the call.

“This journey has been tough, and even though I'm 23 I am sleeping on my grandma's couch because I have the faith I can do this,” he said. “I didn't get a job, even though I needed a job because I need money, but it would have interfered with what I was trying to do. I went out every day and I continued to train and be ready because I felt like one day the call was going to come.”

The Montreal Alouettes of the CFL reached out to Byers and his agent at the end of May, but Byers held out hope he could still make his NFL dream come true. The Panthers hadn’t called by late July, however, and Byers accepted another chance to work out in Montreal in early August.

“I turned down going to Canada in late May, and that was just because I believed I was going to play in the NFL,” he said. “And then one week I decided I would take a chance and not undervalue small beginnings and chase my dream through that route. So I got my passport, and I was supposed to get up there and have a small workout, and if I passed the physical, they were supposed to sign me.

“But I get there, and there were other defensive linemen there, but that didn’t bother me. I am from Clemson, so I knew they weren’t going to be better than me. We get to the workout and they said they were going to have us come back the next day. It was a little disappointing – it wasn’t as organized as I hoped it would be. Then I get on Facebook and saw where the Panthers had a defensive tackle get hurt.”

“The Panthers told my agent they liked me in rookie camp, and they knew what kind of player I was, so they were going to fly me down that night from Montreal to Charlotte and have me work out for them so I could be ready to play on Thursday night in the first exhibition game in Baltimore,” Byers said. “At this time, it’s like ten p.m. at night and my flight left at 5:30 in the morning. I had about one hour of sleep, and I get there around 3:50 and the Delta systems are down.

“I was supposed to get to Spartanburg around 10 a.m., and I didn’t get there until two or three. I was still excited – this was my hometown team, and I was excited. I passed the physical, and I signed and I went straight to meetings. They told me I was going to play at least 20 snaps on Thursday, so I knew I would have one day of practice on Tuesday and then on Wednesday I would fly with the team to Baltimore.”

The team had a walk-through on Monday, but when Byers got back to his room Monday evening, he knew something didn’t feel right. He tried several remedies, and when he didn’t feel better Tuesday, he realized he couldn’t practice. The Panthers – in need of a body to play Thursday – released Byers so they could go in another direction.

“I was about to give up at that point,” Byers said. “It’s what I had worked for, what I had made sacrifices for was all being taken away in just one day. And then I got home, and it was released that I had just signed. At that point, I didn’t want to talk about it or think about it and answer people’s questions. So I decided to face up to it, and I texted Coach (Dabo) Swinney and told him to tell the players to enjoy every minute of it because it can be taken from you in a minute.

“I am still not going to give up. I don’t know why it had to happen this way, and I still believe there is a plan for my life and I believe something good will come out of this. For about ten minutes, I thought about giving up, but I am going to stay positive and keep pushing. I had worked so hard for something like that and then it was so short. But I don’t have any regrets and this has motivated me even more. And because I did get there lets me know I can get there again.”

Think he can’t do it? Don’t tell him that.

“If I could get a dollar for every time someone told me to give up and every time someone told me I should give up football and that I needed to let it go, I wouldn’t have to play football,” Byers said. “I would be set for life. But when you believe in yourself and have a little bit of faith then I believe God will give you the desires of your heart. It’s easy to give up, but this is just another thing. I will overcome it. I'm thankful for the opportunities I have had, and I am not going stop. It's been a crazy weekend but I wouldn't trade it for anything. I am going to trust the process and continue to work."