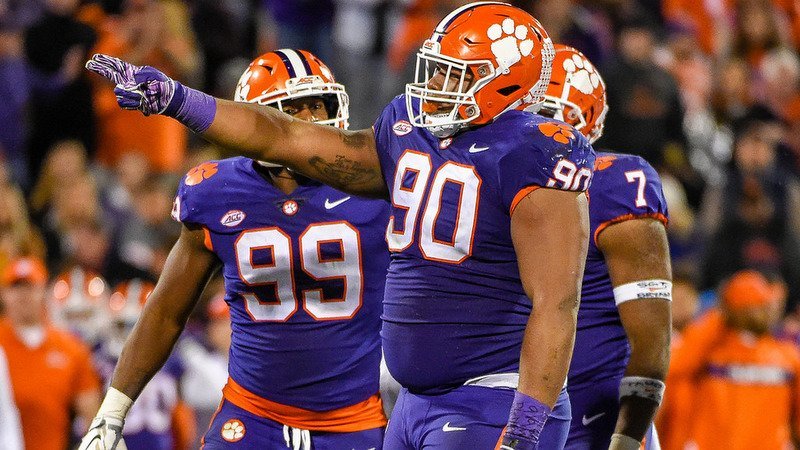 Lawrence will likely head to the NFL after this season

The absence of defensive tackle Dexter Lawrence didn’t make much of difference against an average Notre Dame, but there is no doubt that he will be missed against Alabama.

No. 2 Clemson will be without Lawrence, tight end Braden Galloway and offensive lineman Zach Giella Monday night in the College Football Playoff National Championship vs. No. 1 Alabama. The trio were suspended for the Cotton Bowl national semifinal win over No. 3 Notre Dame on Dec. 29 after testing positive for the banned substance ostarine.

All three will also miss Monday’s game, according to Athletic Director Dan Radakovich.

"As requested by these student-athletes, Clemson filed notices of appeal with the NCAA," Radakovich said. "We will continue to work with the three student-athletes and their legal representatives over the coming weeks to prepare the appeals. Neither Clemson, Galloway, Giella nor Lawrence anticipate having further comment on this matter until the appeals have concluded."

The three players will be able to travel with the team to Santa Clara, California, later this week.

A B sample also returned positive on Dec. 27. The players' suspensions were upheld for the Cotton Bowl semifinal. Clemson coach Dabo Swinney hoped the appeal Clemson immediately initiated would conclude and clear the players before the national title game Monday against Alabama.

The NCAA Committee on Competitive Safeguards and Medical Aspects of Sports will hear the appeal via teleconference.

According to the USA Today:

According to NCAA policy, Clemson can challenge the validity of the test by disputing the integrity of the collection and testing processes or by contending that a player did not know or “could not have known or reasonably suspected” that he “had been administered a substance by another person that later is found to have contained a banned ingredient."

A school can also assert that the suspended athletes were misinformed by an athletics administrator after a reasonable inquiry on the substance. However, that argument could prompt institutional sanctions.

If the appeal is denied, the players would lose one season of eligibility and could not return to competition until a full calendar year after their tests were initially collected. They would need to pass a drug test to be reinstated.

Lawrence is one of the top – if not the top - defensive tackles in the entire country. The 6-foot-4, 350-pound true junior had 37 tackles, 7.5 for loss and 1.5 sacks in 13 games this season. Lawrence draws double-teams inside that frees up defensive ends Clelin Ferrell and Austin Bryant, fellow defensive tackle Christian Wilkins, and the linebackers.

Without Lawrence in the Cotton Bowl, the defense didn’t have much of a problem against Notre Dame. The Irish ran for just 88 yards and 2.51 yards per carry, notched eight tackles for loss and sacked quarterback Ian Book six times. As was the case in the semifinal, Albert Huggins and Nyles Pinckney will be expected to fill in for Lawrence vs. the Crimson Tide.

With Lawrence out, Huggins will likely start again in the title game and he will be tasked with slowing down an Alabama rushing attack led by Josh Jacobs, Damien Harris and Najee Harris.

Lawrence’s ability to push the pocket – and create havoc without getting in the stat line – will be missed. Huggins is very good against the run and has 2.5 sacks this season and seven in his Clemson career. The Alabama offense loves to get a lead and then start landing hammer blows against the defense and win the war of attrition. Lawrence would have been backed up by Huggins and Pinckney with Jordan Williams in reserve.

Now, Clemson has to make sure Huggins stays fresh for the second half of the game, which means Pinckney and Williams will play a bigger role. Lawrence leads Clemson with 15 quarterback pressures on the season, and with the Tigers needing to put pressure on Alabama quarterback Tua Tagovailoa, there is no doubt that while Lawrence wasn’t a big loss against the Irish, his absence will be felt against Alabama.