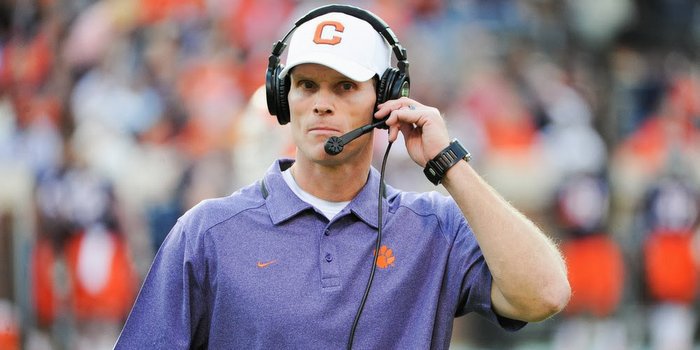 CLEMSON – Brent Venables has done a remarkable job since he’s been at Clemson, despite the roster he’s had to endure the last three seasons, and head coach Dabo Swinney says there are no negatives when it comes to his defensive coordinator.

Clemson’s defense has improved every season under Venables. Prior to his arrival, Clemson finished 71st in total defense in 2011, improved to 64th national in Venables' first season as Clemson’s defensive coordinator and rose to 24th in 2013.

Venables was awarded the national defensive coordinator of the year by FootballScoop in 2014 after his defense led the nation in total defense (260.8 yards per game), pass efficiency defense (98.3 yards per game), first downs allowed (185), third down conversion percentage (27.4) and tackles for loss (131).

In 2015, Venables’ defense was fourth nationally in third down conversion percentage, fourth in sacks per game, and finished 10th in the nation in 2015. Clemson defense has led the nation in tackles for loss for three consecutive years.

The Tigers gave up 70 points in the Orange Bowl to West Virginia under former coordinator Kevin Steele – the Tigers will face Steele in week one at Auburn – and Swinney decided to make a change. Venables, at Oklahoma at the time but also the subject of intense scrutiny from the Sooner fan base – decided to make the change and Swinney said the decision is one of the best he’s made.

“He just had a good comfort zone on what we needed to do defensively, within the framework and the philosophy of Clemson,” Swinney said. “He's been great, he's been tremendous. He's passionate and a very detailed guy. He's a great recruiter and he loves the players. He's a great family guy, there's just really no negatives when it comes to Brent Venables whatsoever.”

The Tigers have beaten LSU, Ohio St. and Oklahoma twice in bowl games since Venables’ arrival, but Swinney points out that Venables shouldn’t get all the credit.

“He's done a great job, but it's not just Brent. Marion (Hobby) has been here with me before Brent came and Dan (Brooks) has been with me the whole time,” Swinney said, “Mike (Reed), I think we hired a year after Brent. But, I think the continuity that we've had on both sides is the biggest thing, there's no question about that.”

Venables has also been one of Swinney’s greatest assets on the recruiting trail.

“Brent as an individual is a great football coach and he's an excellent recruiter. We have a great recruiting staff,” Swinney said. “We have a group of guys that take a lot of pride in the evaluation process and who we are as a program. We spend a lot of time on that part of it. I've been around coordinators in my time that didn't like to recruit. Everybody has good x's and o's and everybody has good coaches, but it's getting the great players, that's your lifeline. Our entire staff is structured that way. Our coordinators love to recruit and they're passionate about it and so am I. It’s a very healthy situation.”

Under Steele, the Tigers had a reputation of being able to stop conventional offenses but struggling to stop teams that run the spread, especially if the opposition had a mobile quarterback. That hasn’t been the case under Venables, and Swinney says it’s because Venables saw the spread almost every week in the Big 12.

“Brent has brought great toughness. He's helped me create the type of culture that I want to have defensively because he bought in from day one on the way we are going to do things at Clemson. It's never been a problem. I remember meeting with him and saying, 'This is how we're going to practice. If this is a problem, I need to know now. This is what we do, so if this is a problem, then I need to know now.' Everything about who we are as a program. From day one, he said, 'Listen, I don't care about none of that. I'm just going to coach defense. I don't care about what ya'll do, we're going to get the defense ready.'

“And his background from the Big 12 was huge for us because of what he's seen. Five years ago we were in a different place as far as the understanding of some things defensively. Because of his background in the Big 12, from a quarterback standpoint and the style of play. And not only against the teams he faced in conference, but what he had to practice against - he had worked with Leach and had seen it all.”