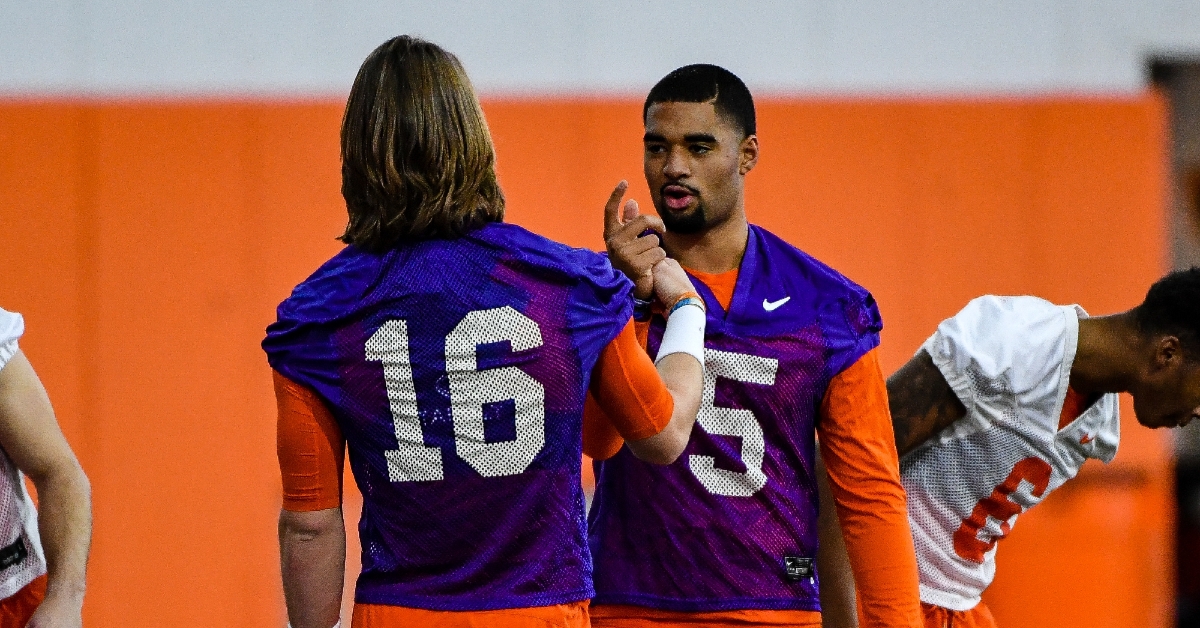 Myles Murphy was impressive, even on the first day of practice.

I have to admit, I really miss spring practice and I hate it we’re missing the spring game.

Most of my fellow media members hate spring practice and the spring game. They look at the practices as a waste of time when they’d rather be doing anything else, and the spring game is viewed as nothing more than a glorified scrimmage where the quarterback can’t be hit and there are no real kickoff returns and punt returns.

I bet even they aren’t complaining now. But I love football, any football, and the spring game is really the highlight of the spring season for me. Yes, I love college baseball and I was having a ball watching the softball team, but I was looking forward to a sun-splashed and warm Saturday in Death Valley with orange as far as the eye can see.

There were some spring storylines we were following and wanted to see to the end, but with recent happenings all I can write is here are the five things we really wanted to see in the spring game.

Whenever we were allowed to watch practice, Uiagalelei was impressive. The arm strength is there. The accuracy is there. He dropped a sweet 40-yard pass to tight end Sage Ennis that was a thing of beauty. During post-practice interviews, Uiagalelei was in the background getting in extra work, throwing with anyone that would stay after to throw.

Even starter Trevor Lawrence was impressed. 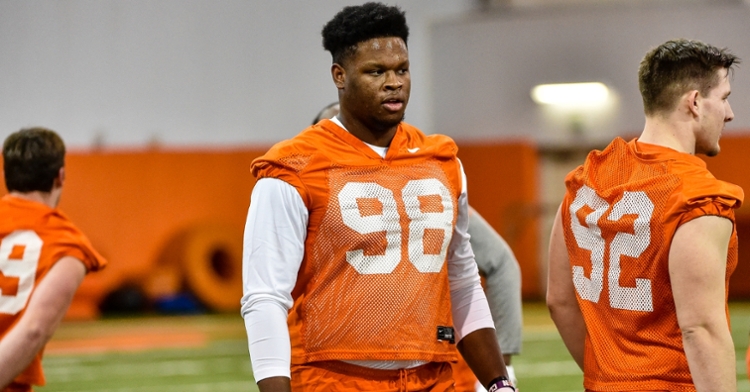 Myles Murphy was impressive, even on the first day of practice."

“He looks good. Just kind of the way he carries himself, I feel like we’re similar in that way,” Lawrence said. “We have a good relationship. Just obviously he’s a great player. He’s picking it up quickly. That’s the one thing I can tell is, he knows football. He gets it. It clicks quick with him. He’s huge. He’s full-grown already. He doesn’t have to put on any weight or anything. It’s a little different from me. He’s a great player, great guy.”

Uiagalelei was working as Clemson’s No. 3 quarterback behind Lawrence and redshirt freshman Taisun Phommachanh. Uiagalelei and Phommachanh will compete for the backup job throughout the spring and likely into the fall.

“It’s fun to watch him, especially live. I’ve seen him many, many times on tape. So he can sling it,” Clemson coach Dabo Swinney said of Uiagalelei. “So can Taisun. All three of those guys are fun to watch.”

Both were 5-stars but Bresee was the headliner, the player who could play two positions and be athletic at both. However, Murphy (really not that far behind in the recruiting rankings) was the talk of camp with his size and speed and quickness. He even drew a wry smile and raised eyebrows from offensive coordinator Tony Elliott.

“Bresee is as advertised, but Bresee has been a little bit limited with the knee,” Elliott said. “But Myles Murphy, oh my gosh. That guy there, I mean he’s definitely as advertised. He’s really flashed so far. He’s going to push those other guys, just from my perspective, at that position. Fast, instinctual. He’s got a motor and a quick change of direction. And you can tell he’s a student of the game. He looks almost polished as a young guy.”

Even defensive coordinator Brent Venables was impressed with Murphy.

“The game is slow for him, all things considered. He’s been very well-coached. He comes with really good fundamentals, knows how to play low and with leverage. Very explosive,” Venables said. “He’s long. He’s not only got good linear speed but good lateral movement and quickness. He sees things fast. I would say like Christian Wilkins could see the game fast.”

Derion Kendrick is the lone returning starter (unless you count safety Nolan Turner, who might as well have been a starter for all the snaps he played) but missed part of camp with an injury, as did cornerback Andrew Booth and a few others. That meant that freshman Fred Davis received a lot of reps and 1-on-1 attention from corners coach Mike Reed.

"He's long. His head is spinning if you ask him, I'm sure. But Fred has done well. He loves to compete,” Venables said. “Always ready to go. Just learning how to practice and what to do. He's getting baptized. I think we got three scholarship corners that are healthy, so he's getting a bunch of reps. But Fred is fun to be around, got a great attitude and a really hard worker."

Swinney likes what he saw out of the secondary, including Lannden Zanders.

"Lannden (Zanders) is, I think, going to be special," Swinney said. "Joseph Charleston, he's a big-time talent. Ray Thornton has probably flashed as much as anybody this spring. Really impressed with what I've seen in Ray Thornton. Jalyn Phillips is a guy that brings a lot to the table as far as diversity with his play. So really encouraged."

He also liked what he saw out of freshman safeties Tyler Venables and RJ Mickens.

"Obviously Mickens and Venables just got here, but you notice them," Swinney said. "It's easy to notice them. Elijah Turner, then we moved Ben Batson over there. We've got a really good group of guys, deep. A lot of special teams bodies."

Tee Higgins battled injuries during the College Football Playoff and when he wasn’t on the field, the results weren’t pretty. Part of that was because Justyn Ross, who tried to move to boundary receiver when Higgins was out, was battling a sore shoulder and neck.

However, freshman EJ Williams and rising sophomore Frank Ladson were two of the standouts, and Amari Rodgers talked about both.

“He's very playful. Sometimes he can play a little too much, but you know that's just his personality,” Rodgers said of Ladson. “He is a very fun guy to be around. He's one of my closest friends on the team. He loves to work hard. He's hungry to be better. He's always asking questions. He comes from a very well-rounded family and he's very respectful and that's why I love being around him."

Rodgers then gave his observations of Williams.

"He kind of reminds me of Ross. They have the same skill set, it's kind of weird. He's going to be special. He's got to work on putting on more weight, but you know all freshmen do. He's out here making plays so I'm excited," Rodgers said.

The freshmen in general

Swinney raved about this class BEFORE they took the field, and his praise didn’t stop once practice started.

“To be honest with you, they’ve all flashed to me. The second OL, that’s a hard position to play, especially when we’re going against our defense, but I love what I see in those three new guys that are here,” Swinney said. “They’re exactly what we hoped they’d be. They’ve got a little more to learn but again, watching them in a couple of our competitive drills, pretty impressed with them. I put Tayquon (Johnson) in that group too because he just moved over but I think we’ve got a good group. But those d-linemen, you know? You can’t help but notice them.

“Fred (Davis), out there at corner is a great looking athlete. E.J. (Williams), he’s smooth as silk, (he’s) got to get bigger and stronger and all that, which we all know but he’s got a lot to learn. D.J. (Uiagalelei), all those guys, man. We knocked it out of the park with that whole group. Sage Ennis, man. He is physical. He’s got a mentality that you love. He really jumped out at me today watching him in the drill work, but Cade (Stewart) and (Bryan) Bresee, you can’t help but notice them. Those three linebackers, you can’t help but notice them. Tyler Venables, (R.J.) Mickens, you just notice them. It’s just a good looking young group of talent that just got here that I think we hit on all them. They all got ways to go to be functionality players but we’re off to a good start with that group.”