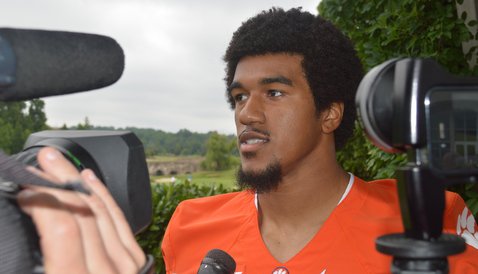 Beasley talks to the media Sunday at the ACC Kickoff

Vic Beasley
RS Sr. Defensive End
#3 6-3, 225
Adairsville, GA
View Full Profile is a virtuoso on the football field, merely an apprentice at the keyboard and the keys he reads on college football Saturdays differ greatly from the keys that help him relax.

Everyone knows what Beasley can do on the field, but it wasn’t until yesterday that Clemson fans – or 1200 women attending Dabo Swinney

“Me playing the piano is the perfect example of something that people probably don’t know about me,” Beasley told TigerNet at the ACC Kickoff Sunday afternoon at the Grandover Resort. “It’s something that I like to do in my spare time, to get away from football.”

Even his teammates – the people he has spent the majority of his time with over the last four years – were taken aback when they discovered Beasley’s hidden talent.

“They should know by now that I can play the piano,” Beasley said. “It definitely surprises a lot of people, especially my teammates. They are all like, ‘Dang man, you’ve got a musical talent?’ It’s crazy what you can learn about a man.”

Even more impressive than the 6-2, 235-pound, All-American defensive end playing the piano is the fact that he is self-taught.

“I’ve been playing the piano since I was 16 years old,” he said. “I just enjoy playing and it’s just something that I’ve always liked to do. I just didn’t really pick it up until I was 16. I don’t really have a favorite song. I play a lot of gospel songs.”

Beasley plays mostly in the comforts of his own home, but he stepped out of his comfort zone Saturday afternoon at the Ladies Clinic.

“I’ve got one (piano) at my house,” he said. “I played for the first time in public at Clemson yesterday. I played Thinking About You by Frank Ocean.”

For the time being, however, his piano playing will take a backseat to Heisman Trophy and National Championship aspirations.

“I feel like I could [win the Heisman Trophy],” he said. “My goals for this year is really to win the National Championship and be the best influence my team needs. It's to lead my teammates and leave a legacy at Clemson University.”

Beasley will be one of the leaders on a defense that might be one of the best in the nation, but Beasley said the Tigers need to keep their edge.

“I think we have the potential to be the best defense in the country. With the experience up front like we have with guys like Grady Jarrett

Tony Steward
Sr. Linebacker
#7 6-0, 235
Hastings, FL
View Full Profile , I feel like the guys on the front seven are capable of being very beneficial to the team this year, and I feel like we have the ability to be the top defense in the country this year.”