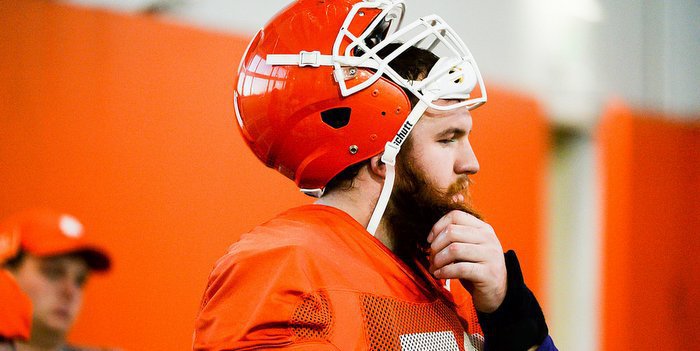 The NFL and Chicago will be the center of the sporting world Thursday night and into Saturday, the league spending millions of dollars to put on its biggest show since the Super Bowl. Players and agents have descended on the Windy City with new suits and sparkling that promise a fat paycheck down the road.

Once those first round players learn which team has earned their rights, they will pose for the cameras and conduct multiple interviews over the next few days as the next step in their journey begins.

But what if you aren’t one of those first or second round draft picks? What if you don’t have a high-priced agent hovering over your every move, putting you up in a luxurious suite at a local hotel and making sure you and your family have all the food you can eat? What if you just have your family and a few friends sitting in a small apartment in Clemson, waiting for a call that may or may not come.

The former Clemson offensive lineman hasn’t had a whirlwind tour of cities and teams to visit, and he hasn’t held private workouts for NFL executives and scouts. He’s worked out in Atlanta to hone his body, and he’s waited to hear if teams are going to take a chance on a player with a love for the game, a keen mind, and a warrior’s mentality.

He just wants a chance.

“Really, I'm just hoping for an opportunity. With all of the things we've heard, I know I'll get one,” Mac Lain told TigerNet this week. “I really have no expectations. I would love to get drafted just because that's been my dream since I can remember - to be in the NFL and to be drafted. Not to say that I don't care, because there's a lot of money involved in being drafted and not being drafted, but at the end of the day, I just need a chance. I just need to get in some camp. I think the way I was raised, the way I was taught at Clemson, the way I've been developed at Clemson I think that I will ultimately shine and outshine other people and everything will come to fruition.”

Mac Lain said he’s heard a little bit of everything when it comes to his status.

“I've heard it all. I've heard from the fourth round to free agency,” he said. “I really have no expectations other than hopefully I'll be somewhere at some point.”

Unlike some of his former teammates, Mac Lain hasn’t lived the jet-setter lifestyle, instead working out and hanging with Travis Blanks in Atlanta. He sees where his teammates might be picked, and he sees high draft grades for people he went head-to-head against over the past two years. He knows he can play at that level, and he thinks that teams finally see that.

“I didn't take any visits, and I didn't work out for any teams, which sucks. I was really mad for a long time and confused about if I was even going to get a chance,” he said. “I was All-ACC, All-Academic, Strength All-American and I can't even get a workout. Then, these last two weeks my phone has been blowing up and I've been talking to people. That's been my extent of people reaching out.

“I couldn't imagine being like T.J. Green and being in a different city every other day. I know that might be fun but at the same time, it sounds awful. I couldn't imagine not being here and having to travel so much. The last couple of weeks I've had a lot of teams just calling and asking the basic stuff - 'Is this your number you're going to be using on draft day? Can we have a backup number? What have you been up to? Are you healthy? Are you feeling good?' Just basic stuff, but at the same time, it's been cool. It was refreshing just to be like, 'We are going to get a chance. We are going to be able to do this.'”

For teams that are interested, Mac Lain is sitting at around 320 pounds, and he says his body feels better than it has at any point since last August.

“At first, it was such a long season that I just took a week to try and relax and get back,” he said. “My body was beaten up and really until after Pro Day I did not feel good or feel confident about where I was just from a health standpoint, but now I feel great. I've been able to train on my own and do my own thing - do things that I think I need. I think that's really helped, and I'm good to go.”

“I just handle what I can handle. Everyone asked me if I was nervous before the national championship and I wasn't just because it was another game,” he said. “Well, it's just going to be another day. I'm sure as soon as it happens, I'll be a little teary eyed and excited if I get that call saying, 'Do you want to be a so-and-so?' I really look forward to that opportunity, but as of now I'm not too nervous. There's nothing I can do about it.”