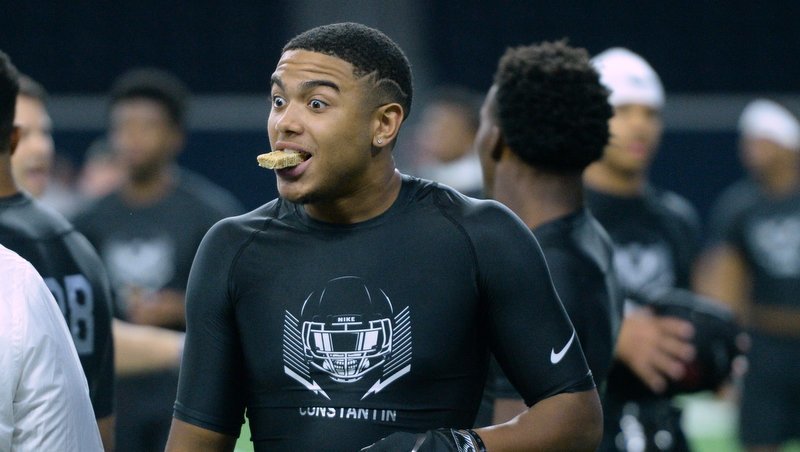 FRISCO, TX – Things are heating up in Frisco. Literally.

As the temperatures continue to soar in the greater Dallas area, The Opening Finals kicked it into high gear Sunday afternoon.

That included the skills showcase, where Clemson target and Georgia commit Nolan Smith won the title of the nation’s most athletic high school football player.

Several highly-touted defensive linemen have come close to winning the Nike Football Rating Championship at The Opening Finals, but Smith became the first one Sunday. The 5-star edge rusher impressed in all of the drills we witnessed and turned in a stellar performance during testing.

Smith was also in contention to take the Alpha Dog honors after his session. When he goes against offensive linemen, he shows his quickness off the ball and he has a variety of moves to slip into the backfield.

Yes, he is a Georgia commitment and has been for a while, but Clemson has staying power here.

*After watching the running backs (for some reason, no Noah Cain) most of the day, I can safely say I hate it that the Tigers missed out on Devyn Ford.

Ford, who is considered as one of the nation’s top five backs, was smooth as he went through footwork drills. The Penn St. commit also showed he is a threat in the passing game, running precise routes and showing good hands.

*It stinks (a little) not having a quarterback to watch this year, but I’ve made it a point to look in on the group. I called it underwhelming after the first day and still believe that (there are several here that wouldn’t have been here is year’s past), but one continues to stand out to me – Oklahoma commit Spencer Rattler. He has the quickest release out there and has touch all over the field.

*I touched on the linebackers yesterday, but I will say it again – Brent Venables would love to have Nakobe Dean in the middle and Bryton Constantin on the edge over the next few years. At one point, that duo teamed up to cover a running back during the Cat and Mouse session and, as expected, shut the proverbial door.

*The No. 2 tackle in the 2019 class, Travon Walker is the most athletic defensive tackle I’ve seen. He had a couple of plays that stood out but I wanted to see more. Because he’s athletic, he moves really well but needs to add more strength before he takes on collegiate offensive linemen. Georgia, Clemson, South Carolina and Alabama are high on his list.

*Frank Ladson continues to flash his speed. Smaller defensive backs have no chance down the field against his listed 6-3 height. I've done nothing but rave about Ladson, so I need to say what I think he needs to work on. He needs to add strength so he can win 1-on-1 battles in the air and create separation at the line.

*Today starts the 7-on-7 tourney and the linemen challenges, so we will have more later.