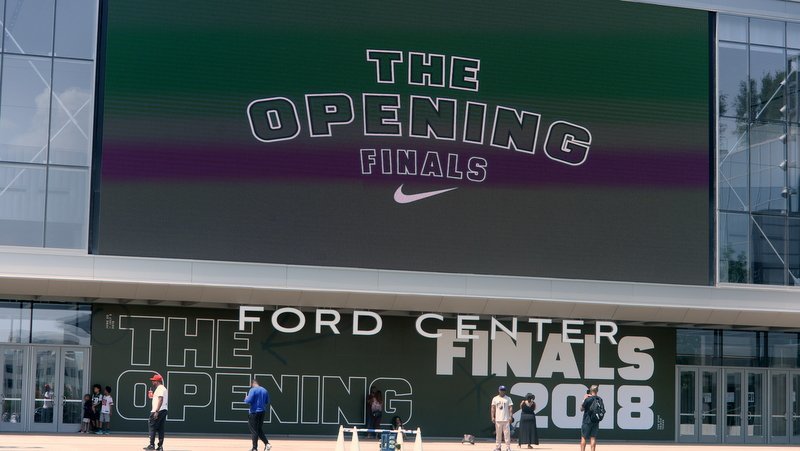 Will The Opening stay in Frisco?

FRISCO, TX – My time here in the greater Frisco and Dallas area has come to a sweltering end, but before I hop on a plane back to Clemson there are a few things I want to pass along.

I’ll start with Clemson commits Frank Ladson and Bryton Constantin. Both have impressed during workouts here this week, but what has surprised me the most is Ladson’s top-end speed. You might have seen the videos by now – a cornerback thinks he’s stride-for-stride with Ladson and Ladson simply pulls away. I saw it time and time again.

Constantin is very fluid in coverage. At The Opening and in any 7-on-7 competition, there is simply no way to tell how a linebacker will react in the running game. However, I’ve seen his leadership skills up close and he loves to communicate. He told me that he has already told Brent Venables he would love to be the quarterback of the defense.

*Clemson offensive line target Clay Webb’s experience at The Opening was limited. Alabama high school rules prohibit their players from wearing pads and helmets this time of year, so he was unable to go full-speed in the lineman challenge. There was one defensive end from another state that has the same rule, so Webb and former Clemson target Pierce Quick mostly had to stand around and watch. More on Webb later, but those close to him tell me Clemson has a very legitimate shot.

*Clemson defensive line target Travon Walker was fantastic the last two days. He didn’t seem to find his stride on Sunday, but he was outstanding on Monday and Tuesday. He has a lot of “quicks” for such a big man, and I get the feeling the battle for his services will come down to Clemson and Georgia. More on him later as well.

*I’ve spoken with a lot of the media here, and the general feeling is that The Opening was passed this year by the Rivals 5-star Challenge. Jerry Jones, owner of the Dallas Cowboys, bought the organization that runs the event and moved it here to Frisco to the Dallas Cowboys World Headquarters and The Star. The thought process is that Dallas is more central to the country’s recruits, there is a hotel for the players next door to the complex, and the Dallas airport is cheaper and easier to fly into than Portland.

However, this event took a major step back this year. I am not sure if it’s the lack of “wow” talent (this recruiting class, to me, seems to be down) or the location or what, but there was simply no excitement here this year.

Of course, part of the excitement of Beaverton (OR) is the fact that it’s on Nike’s campus, the Nike personnel are all there to watch, the weather is gorgeous and you have to pass the parking spaces of guys like Bo Jackson, LeBron James, Michael Jordan, and others to get to the practice field.

The weather in Oregon last year was in the mid-70’s with little humidity, which made it perfect for the 7-on-7 stuff. The ones held outside yesterday saw temperatures reach 115 or more out on the field.

When it comes to the players themselves, they all said the music was a no-go (what music there was simply couldn’t be heard in the echo chamber that is the Ford Center), they were all disappointed they didn’t get to go to Nike after seeing that complex on television over the last several years, and many said it simply didn’t live up to what Rivals accomplished this season.

Will it stay in Dallas? Money talks, so probably. But things have to change if they want to get it back to what it has been. I polled 10 media members this morning, and seven of them said they wouldn't be back next season if it is still in Frisco.