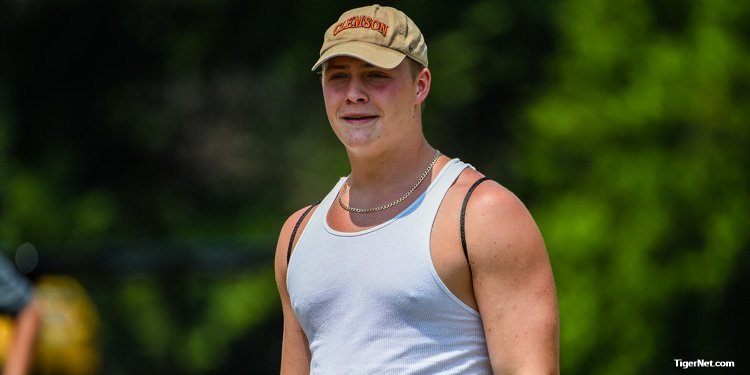 Parks at Clemson's high school camp a few weeks ago

Walker Parks is looking to make another jump in the rankings.

Parks is the 2020 Clemson offensive line commit from Lexington (KY) Frederick Douglass who has seen his stock and rankings rise this spring and summer after several stops on the camp circuit. Parks has gone from a 3-star to a 4-star and is in the conversation to receive a 5th star.

“I think it's pretty cool. A couple of months ago, before camp season rolled around, I said I wasn't going to go to them. My ranking was really low,” Parks told TigerNet. I knew what I could do, personally, and Clemson knew what I could do and that is all I really needed. I committed pretty early, so I was kind of set on getting ready for Clemson. And then I realized that my best friend Jager Burton was going to hit a lot of the camps, and I thought I might as well give it one last go around because this is the last time I will ever be able to go to camp with him.

“So, I went and then things kind of started skyrocketing after I started beating people everywhere. And from there I got invited to The Opening and my ranking shot up. And then I got invited to the Rivals 5-star Challenge and that came around. I read the other day that my stock has risen more than any other offensive lineman. That is always really cool to have happen, but I am hoping to raise it even more at The Opening.”

Parks has agreed to do an Opening Diary for TigerNet. He is one of nine Clemson commits at the Opening Finals, an invite-only event in Frisco, Texas, at the Dallas Cowboys world headquarters. The event brings together over 100 of the nation’s top prospects. Most come from the 2020 class, but a few athletes from future classes are invited as well.

Parks participated in the Rivals Five-Star Challenge last week and went up against Capehart and Bresee.

“They are really good athletes. Bryan got me on the first one, and then the second one I won,” Parks said. “It was fun going against him. And then I beat Demonte. But all through camp they were whipping all of the offensive linemen. To think that we are all going to the same school is pretty cool.”

Parks is already clearing space in his room for all of the memorabilia he’s collecting.

“I have a couple of shelves in my room where I have my Under Armour game invite, I have my O-Line MVP from the Rivals Camp, and I have my Opening invite up there,” he said. “I put my cleats up there literally five minutes ago from the 5-star Challenge. I am looking to add some more hardware to that.”