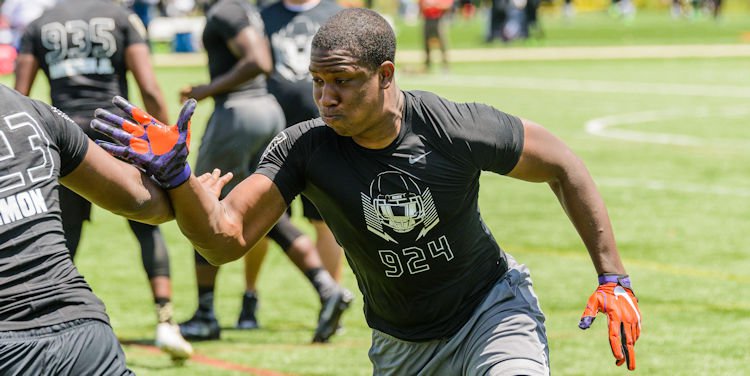 K.J. Henry dominated Sunday, and he did it while wearing Clemson gloves (Photo by David Grooms)

CHARLOTTE, NC – The Mecklenburg Country Sportsplex was filled to capacity Sunday afternoon for The Opening Charlotte, and Clemson’s iconic paw was everywhere.

Winning a national championship and getting free and positive publicity is a good thing.

K.J. Henry, the big-time defensive end out of Clemmons (NC) West Forsyth was sporting a pair of Clemson gloves during the workout session, and he wasn’t shy about holding his hands together to show off the paw.

He wasn’t the only one. Wide receiver commit Derion Kendrick out of Rock Hill (SC) South Pointe wore an orange bandana that he used to cover his mouth while he ran routes, and he had on orange Clemson socks. Quarterback commit Trevor Lawrence out of Cartersville (GA) wasn’t sporting Clemson gear, but his dad Jeremy wore a big, purple Clemson shirt. He’s tall, like Trevor, and he stood out wherever he walked in the crowd.

Tre Morrison, a 2019 defensive back out of Moncks Corner (SC) Berkeley, who projects as a safety on the next level, was decked out in Clemson shorts, shirt and gloves as well as an orange headband. Morrison told me his sister was a cheerleader at Clemson, and he hopes to make his way to the upstate.

I was intrigued by his skillset, so I texted Randy Robinson (the head coach at Berkeley) and he told me Morrison has put in the work necessary to be a D1 player. Robinson, who coached at Daniel, told me he as 14 players in his 2019 class that he thinks can be D1 players, saying it was very comparable to the 2014 class he had at Daniel.

K.J. Henry dominated Sunday, and he did it while wearing Clemson gloves (Photo by David Grooms)"

We’ll keep an eye on Morrison, who has already drawn the attention of area recruiter Tony Elliott.

Class of 2020 wide receiver Porter Rooks (we will have a story on all these kids later) out of Charlotte (NC) Providence Day was on hand, and his dad was also decked out with a Clemson hat and sweatshirt. His brother Patrick played on Clemson’s basketball team.

I spotted one woman wearing a Clemson jersey, and when I walked by I asked her jokingly is she was a big fan. She told me she was not only a fan, that her son was Kendrick.

Speaking of Kendrick – I wrote yesterday that he was easily the athlete on the field, and it took me just a few minutes to make an analogy that I hope people understand. In baseball, when a guy throws really hard and makes it look effortless, it’s called “easy gas.” That is the way I see Kendrick. He looks like he is gliding, hardly putting out effort, and he just blows by people. Comes out of his breaks quick and never loses speed.

While we were watching Henry work out, there were two guys standing behind us who were talking about how “it seemed like everyone out there, who was any good was committed to Clemson.” They said that Clemson has just dominated everyone over the last two years.

I had one parent of a top prospect tell me he would love for his kid to go to Clemson, or even get an offer. But then he said, “At some point, it’s just numbers. They get to pick and choose the guys they want, while these other schools are out there throwing out 15 and 20 scholarships for one position, hoping one guy will commit. Clemson doesn’t do that.”

The parents of another defensive end prospect, who was really good and has offers from over 20 schools, stopped me to ask about Clemson, and the dad told me the same story. Clemson already has Xavier Thomas and Justin Mascoll and is hopeful of landing Henry, and at some point there are really good players that don’t even get an offer.

That shows you just how strong Clemson is recruiting right now. It also shows you that everyone associated with recruiting and big-time high school football recognize that fact. I wrote a few years ago after one of these combines that Clemson was close to being mentioned in the same breath as the nation’s elite recruiters.

When I talk to people now, it’s Clemson, Alabama, Ohio St., and everybody else.

Back to Henry for a second. In my baseball parlance, he’s “a dude.” Even when he goes half-speed, he is explosive. He has quick, violent hands that are able to shed blocks, and his first step is dynamite. He also takes coaching, which is something I like to watch. When the defensive linemen go up against the offensive linemen, tempers usually flare. Henry kept his cool, took the coaching, and cheered on his defensive line peers. He even offered advice to a few of them who lack his amazing physical skills.

We will run our interview with him either later today or tomorrow, but he had great stuff to say about Clemson. We also met his mother and, for the record, she likes Dabo Swinney a lot.

I had on khaki shorts, a Red Sox cap and a blue shirt, but word gets around quickly who is there for what school. I had parents approach me to ask me about getting their kid noticed about Clemson, and I had to recap the National Championship’s last two minutes more than once. People wanted to come up and ask, “What was it like?” I like to talk, so…….

In short, it was a great day in Charlotte, and the paw was everywhere.