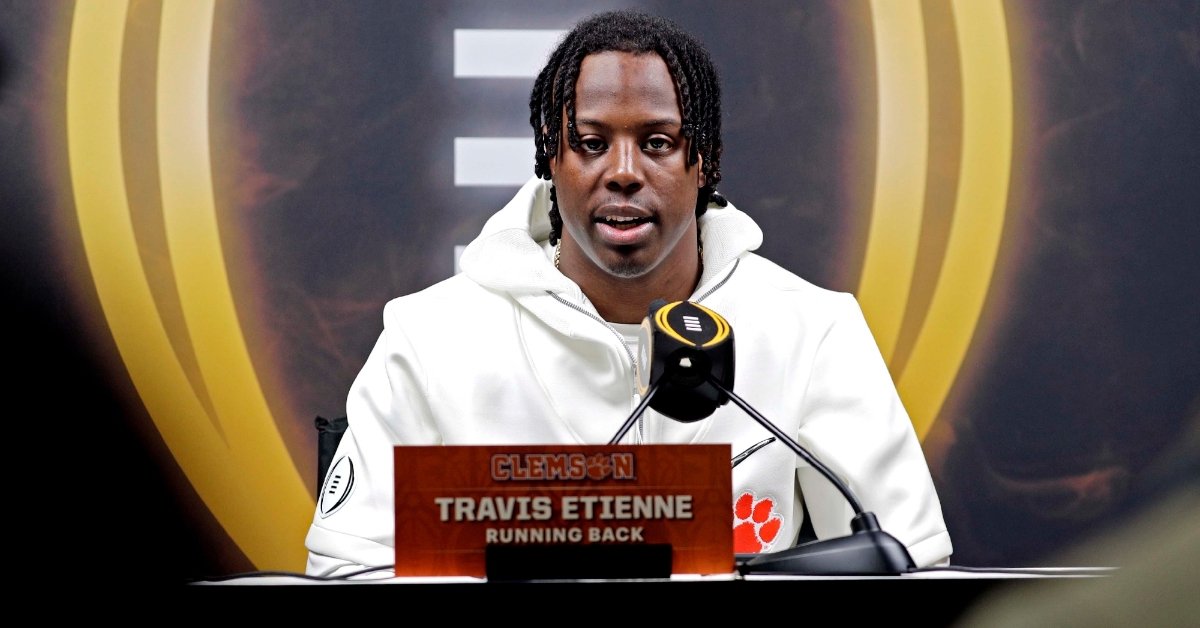 Clemson running back Travis Etienne will take the field for No. 3 Clemson when his Tigers take on No. 1 LSU in the National Championship Game in the Superdome. Etienne was born and raised about 175 miles from New Orleans in a small town called Jennings, and he said he’s looking forward to the opportunity to once again take the field in his home state.

“It is very exciting, just knowing the opportunity I have to come back to my home state and be able to possibly win a National Championship here, which is really great,” Etienne said. “It's something you couldn't think of, something you couldn't even script up in a movie. I can't thank nobody but God for the opportunity I have. Going out, executing, making the most out of my chance.”

Etienne said growing up in Jennings made him the man he is today.

“It is a very small town. It takes a village to raise a kid. I know everybody around there,” Etienne said. “Everybody was able to – back in the day, if I was doing something, my neighbors were able to spank me until my mom got there. It kept me humble, kept me – made me who I am today, made me appreciate things a little more, be thankful for the opportunities in life. Just being here, not many get the opportunity to have that in life. I'm thankful, grateful for that. It has just helped me with my outlook on life.”

Playing in front of friends and family might cause emotions to run wild, but Etienne says he knows he has to keep those emotions in check.

“I feel like at the end of the day it makes it more special. Makes it – that's what makes this game more special, coming into this place where there will be LSU fans everywhere. That's what you want from a competitive standpoint, just to go in somewhere at their home and just kind of try to take over it. That will make the opportunity for us just that more much special.”

The last time Etienne took the field in the Superdome, he was a nonfactor after taking an early hit in Alabama’s 24-6 victory. He wants a different outcome this time around.

“For me, from that game, I remember getting smacked by Ronnie Harrison. He was coming across the middle, me trying to hit him. I kind of led with my helmet, and I kind of hit my head with his head and kind of was like out the whole first half,” Etienne said. “And just getting back in the game, and just a game going with Alabama, everything going that way. We not really playing, not executing things that we can – just a game, just having that feeling of just not knowing that you gave it your all, and there were things that you couldn't control to have the game go differently. That's how I remember it when I think about it.”

This time around, the Louisiana kid is looking for a different outcome and knows how to go about it.

“Just preparation. Just watching extra film. Just being – just watching extra film, just being aware of the situation that you have in hand, not taking it for granted,” Etienne said. “I definitely feel like my first year I wasn't as focused as I am. I was a totally different player than I was freshman year. Taking advantage of my opportunity and just preparation, watching more film and just not taking more for granted.”

Having his family there to watch will make a difference.

“It is really a great opportunity for me to just have my family here. They come to every game. This is just a little different,” Etienne said. “They don't have to travel 11 hours to get here. This will be a great experience knowing they're here with me. Just looking up there, knowing what they have done for me throughout the last three years and the sacrifice since I have been in college. It will be great. I just want to play the best I can for my mom and dad. They have been so special in my life. Just really motivating me to the young man I am today. Just – I feel like the only way I could pay them back is to go out there and play free and play the best four quarters I can for them.”