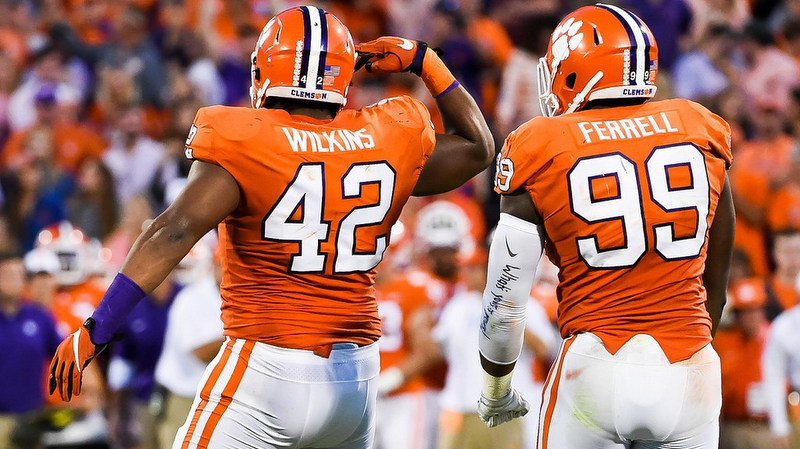 Wilkins and Ferrell will be fun to watch this season

You don’t want to miss the last ride of the Power Rangers.

I’ve mentioned it many times before, but I will say it again – I am really looking forward to this season. I think this team, top to bottom, has more talent than any of Dabo Swinney’s other teams. There is depth across the board (except maybe in the secondary, that remains to be seen) and that depth is talented.

I think the schedule sets up for a run to the College Football Playoff, and if the coaches push the right buttons at quarterback, this season could be historic. There is more than one reason to be excited about the season, to purchase tickets and want to watch every second of every game.

I’ve gotten spoiled over the years in not having to pay for tickets to college football games. I told my wife one time that I would pay to watch Deshaun Watson play quarterback, and I meant it. I would pay whatever it takes to watch Clelin Ferrell, Austin Bryant, Dexter Lawrence, Christian Wilkins and Kendall Joseph dominate college offenses one last time.

The last ride of the Power Rangers.

I was around for C.J. Spiller’s final few seasons, and I wrote back then that a special talent like Spiller comes around once every generation. I told people to watch him and to enjoy every moment he was on the field in a Clemson uniform. A few years later, a cat named Sammy Watkins burst on the scene, and I told everybody to watch his final season with a sense of appreciation. Then came Deshaun Watson, and all three years were a thing of beauty.

Watson’s last hurrah – as perhaps the greatest player in Clemson history – was a touchdown pass to Hunter Renfrow that beat Alabama for Clemson’s second national championship.

Is it too selfish to hope for the same from the Power Rangers?

I get it – Ferrell, Lawrence, and Wilkins have been the Power Rangers. Bryant and Joseph have not been a part of that group, but for the purposes of this season, I am making them honorary members.

One by one they each announced their decision to return, prompting one of my friends to text me and say, “Is this real life?”

This is indeed real life, and for another season we will be allowed to be spectators as one of the best defensive lines (and linebacker) in college football history return for a final season of orange-colored glory.

I have a memory that stands out about each player. For Bryant, it’s the game against Auburn when he personally welcomed Jarrett Stidham to Death Valley. For Ferrell, it was his Herculean effort at Syracuse last season when he had 5 ½ tackles for loss and 3 ½ sacks in the loss to the Orange. For Joseph, it was the 14 tackles at Auburn to open the 2016 season, but it’s also his belief that one day there will be an ESPN 30-for-30 about the run of excellence this Clemson program is on.

Wilkins is an amazing athlete, and my best memories will be of his catch against Oklahoma in the Orange Bowl and his touchdown reception against Troy. Lawrence posted two sacks in Clemson’s ACC Championship win over Virginia Tech, but was a force to be reckoned with.

There is one lasting memory and it’s a story I’ve told before. I was down on the field before last year’s game at Louisville. I was watching the defensive linemen warm up with a member of the Louisville athletic department. He shook his head and walked away. Later, as I was taking the elevator back to the press box, that same person recognized me and said, “You know, I’ve heard talk radio and I’ve read all of the internet message boards around here all week and I really thought Louisville had a chance to beat Clemson. Not now. Not after seeing that defensive line. Louisville doesn’t have players that look like that and can move like that. It’s over before it starts.”

And just like that, the careers of these great players will be over before it seems like they’ve had a chance to start. Enjoy the last ride of the Power Rangers. I know I will.