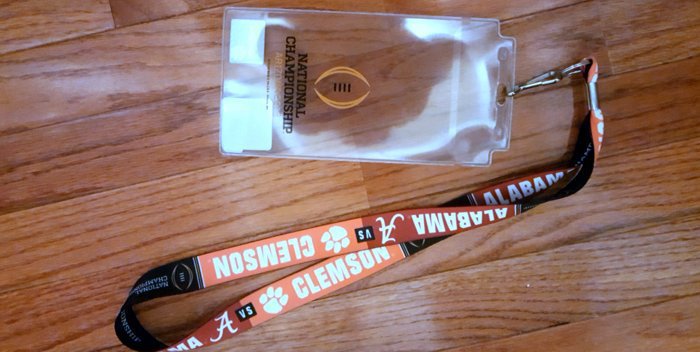 The new lanyard is ready for next season

During Monday’s home baseball game against Florida St., there was about a 30-minute delay as lightning moved through the area. Instead of sitting in the press box and listening to the same tired stories from our fellow writers we took a walk out to the Cajun Café to see if someone would throw a steak sandwich – or even a beverage – our way.

The first person Nikki and I ran into? Bubba Britton. Everybody at Clemson knows Bubba, who was once the famous “Mic Man” and the head cheerleader and now works for the Clemson Alumni Association. Bubba looked at the lanyard hanging around my neck and wondered why there were so many credentials crammed into a tiny space.

Later on, as Nikki and I walked back to the press box, an older lady remarked about our “large number of tickets” we had hanging around our necks, saying, “I bet you could get into almost any game with all of those!”

About four years ago, Nikki and I started a tradition. The beginning of our “athletic year” would be the ACC Football Kickoff in July. The ACC doles out credentials for the event, and we would at some point during the previous summer buy a lanyard that meant something to us, put a large plastic cover at the end and start packing it with credentials.

The new lanyard is ready for next season "

This year’s lanyard is full, and we’ll hopefully add a few more if Monte Lee’s inaugural team makes the ACC tourney and the postseason. Once that’s over, however, the lanyard and all the credentials are retired, taking up a safe but revered spot in my office. One day, once Nikki and I find a home closer to Clemson, the lanyards will hang in a special place in the memento room we hope to have.

Back to the baseball game……I sat there as the game resumed, and I recalled a conversation I had with David Grooms before Sunday’s baseball. David has been helping out TigerNet with photos during baseball season, and he told me that he still gets a rush from being on the field and being a part of Clemson athletics. My guess is he thought that I’ve been doing it so long that I don’t feel the same way. He’s wrong, and that’s the reason for the lanyard. Each piece inside that lanyard is a memory, good or bad. I can go back to the game at N.C. State in 2011 and remember each excruciating detail.

I can look at the credential for the Orange Bowl win against Ohio St. and remember Jeff Davis smoking a victory cigar in the end zone at the end of the game, telling anybody and everybody that would listen that it was just the beginning.

But last year….last year was special. I added two credentials to my list, the Home Depot College Football Awards Show and the Heisman Trophy credential, that I didn’t think I would ever add. There was the ACC Championship Game (my third), and the Orange Bowl (my third, but the first as part of the College Football Playoff). Then there was The One. The National Championship Game credential.

I got home and took out some of the credentials, and I realized that this one was set to retire. It’s full, and it’s full of memories.

The ACC Kickoff will forever be a reminder of the class and humor of offensive lineman Eric Mac Lain. I’m gonna miss that kid.

The Clemson season credential? I don’t think it’s dried out from the Notre Dame game. I will forever look at it and remember doing the Tiger Pregame Show with Scott Rhymer while Ricky Patterson pushed buckets of water off of the tent, and I will remember the roar of the crowd as the Tigers stopped the Irish at the goal line to seal the “Bring Your Own Guts” game.

The ACC Championship Game? I had already walked down to the field, and North Carolina’s onside kicked bounced right in front of me, and the memory of those few seconds on a chilly night in Charlotte will forever be etched in my mind.

The Orange Bowl? The arrogance of the Oklahoma fans and players before the game and the looks on those same faces as the final gun sounded. I walked around on the field after the game – looking for my wife while offensive line coach Robbie Caldwell looked for his – and got a sweaty hug from Jay Guillermo. Mac Lain said he would hug me but he had to go get fluids because of cramps. The sound of the stadium as Ben Boulware killed the Sooners’ hopes with the interception simply proved that I was right in buying tickets to Phoenix early in the fourth quarter.

The National Championship? The pregame was a celebrity-infused and chaotic mess, and the game itself seems like a blur. The true memory of that week was seeing the tears and hurt in the locker room after the game. Sometimes those kinds of memories are the most poignant.

But Nikki and I bought another lanyard in Phoenix…..it’s a National Championship lanyard, and it hangs on the lamp beside my desk, waiting for its turn in the rotation. It will replace the Russell Athletic Bowl lanyard in July, kind of a celebration of the new year.

The lanyard doesn’t lie. This athletic year is almost over. But the National Championship lanyard awaits, and maybe, just maybe, it will prove to be prophetic. Maybe there will be joy instead of tears as the most poignant reminder. The lanyard hangs, and it waits. What awaits it? Only time will tell.