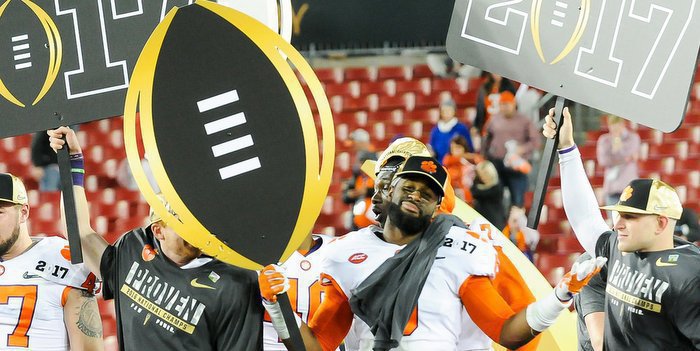 Now that the dust has settled and we’ve all gotten a chance to sit back and reflect on the events of this season, I wanted to take one more opportunity and write about the Tigers’ incredible National Championship run from a slightly different perspective.

In my previous pieces on the game, I’ve written about the confetti and watching other people celebrate and a little of my own feelings. But since then, I’ve had a chance to really take a look at that evening and recall the thoughts and feelings of that incredible evening.

As I’ve mentioned before, I managed to exit the press box and head to the field within five minutes of the end of the game. Making the ride down from the press area to the tunnels took me back to a time seven years prior, when I left the press box following Clemson’s heartbreaking 39-34 loss to Georgia Tech in the 2009 ACC Championship Game in the same stadium.

I exited the elevator doors, and when I walked into the tunnel area, my thoughts flashed back to the aftermath of that game. I wrote about it at the time, but somehow I feel like it bears repeating.

The members of the media that wanted to interview Clemson were assembled in an area outside of Clemson’s locker room – mere feet from where I stood that early Tuesday morning a few weeks ago. The most vivid of those memories was the sight of a young running back named Andre Ellington – he stood in the hallway outside of the locker and leaned his helmeted head against the wall, in tears.

Ellington kicked the wall in sadness and frustration, and later in interviews would tell us that he hoped to never experience that feeling of frustration again.

Jolted back to the present, I went on the field and did what I could with the on-field presentation, and came back in the tunnel to wait for the Clemson locker room to open. Again, here I was in the same spot, but instead of a player dealing with the despair of a loss, I saw jubilation.

After that game in 2009, head coach Dabo Swinney’s wife stood outside the locker room with tears in her eyes, comforting her small children while still giving attention to the well-wishers. Seven years later, she stood in much the exact same spot, again with tears in her eyes. This time, however, they were tears of joy, and instead of small children she had three young men bordering on manhood to deal with.

Same stadium. The same overwhelming sense of emotion. Same people in many regards. But the kids were grown up, and I felt like somehow we had all come full circle. The program, much like those boys, had grown up. I smiled to myself, and that brought back other memories of my time spent covering the program.

There are moments that stand out to me – both good and bad – and the memories are as clear as the day they happened.

I remember the game against North Carolina in 2010, a desultory affair for an offense that didn’t click all season, and Swinney standing in the media tent after the game taking all the blame and promising to fix the issues. I remember the game later that season at Florida St., when Kyle Parker’s interception in the end zone killed Clemson’s chances of winning the game. Later that year, quarterback Tajh Boyd stood in the hallway inside Bank of America Stadium and cried, telling anyone that would listen that 6-7 wasn’t good enough and he promised it would be a winning tradition from that point on.

Swinney made the changes that needed to be made, and there were highs and lows in 2011. The experience of winning the ACC Championship and being a part of an orange-tossing celebration was a highlight. A month later, watching players and coaches in tears after the loss to West Virginia in the Orange Bowl was a low.

Even though there had been some success and a BCS Bowl berth, there still wasn’t a feeling of accomplishment around the program, and it was during August camp in 2012 that Swinney told us he thought the pieces were finally falling into place for the Tigers to make a sustained run at excellence.

An amazing win over LSU at the end of the season set in motion the great success we’ve seen this program over the past four years, with two of those ending in National Championship Game appearances.

For me, however, the first poignant moment of my coverage of the team started in that tunnel at Raymond James Stadium following the loss to Georgia Tech. Somehow, it all came full circle a few weeks ago when I got to witness the other end of the spectrum, with Clemson celebrating college football’s ultimate prize.

The journey has been amazing, and all of the difficult moments make the great ones that much sweeter.

I can’t wait to see where the journey takes us from here.