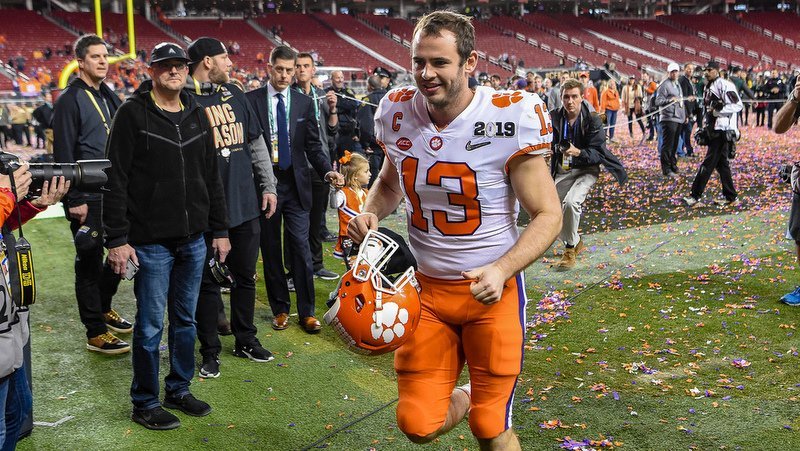 Hunter Renfrow runs off the field as a champion

Hunter Renfrow is already a legend at Clemson. The former walk-on is a fan favorite, caught the game-winning pass against Alabama to win a title, and owns the Clemson records for starts as a wide receiver and consecutive games with a reception.

Renfrow’s legendary status doesn’t matter to Jim Phillips, however, who was only too willing to take Renfrow’s hunting pants and put them in hiding. You read that right – Phillips took Renfrow’s pants away from him and made sure he didn’t get them back for a week. It's just one of the many stories that tie into the Legend of Hunter Renfrow, who worked out at Clemson's Pro Day last week and hopes to earn a shot at an NFL roster.

Where does the story start? It started on a cool November Saturday night in Death Valley. The Tigers were hosting Duke, and during first half action Renfrow stretched out near the Duke sideline to catch a pass. The crowd stood to its feet, breathless, as Renfrow remained down. After being examined by trainers, he was helped across the field and ushered into the locker room.

“It was weird. I’ve never had a concussion before,” Renfrow said. “I caught the ball and then when I hit the ground, and I kind of went limp. I remember it all – I remember running the route, and I have a mental picture of the ball in my hands, and then when I hit the ground I kind of went numb. I didn’t get knocked out, I don’t think. But Tee (Higgins) said he ran over there and it looked like I was knocked out. It was scary, and then it wasn’t because I can remember it all. I can remember Coach (Dabo) Swinney walking over there and then I remember walking out. So, it wasn’t all that bad.”

Renfrow entered the concussion protocol and went to see trainer Danny Poole the next morning.

“I went to see Danny, and we ran a bunch of tests, and he cleared me,” Renfrow said. “But he told me to rest and take it easy and not even watch TV. I guess the pixels on the TV would have been bad for me, so I went back to my apartment.”

Renfrow shared an apartment with fellow wide receiver Will Swinney, the coach’s son, and once back at his apartment realized it was going to be a long day of doing nothing. Renfrow isn’t good at doing nothing, so he thought he had a good idea.

“I made the decision that I wanted to go deer hunting,” Renfrow said. “I mean, what better place to kind of get away from it all and clear your head than getting out in a deer blind and getting in the wild and just being at peace? So I decided to get out in the woods.”

The thought ran into an instant roadblock named Jim Phillips.

Phillips is one of Swinney’s former high school coaches, and he still lives in Pelham, Alabama. Now that he’s retired, however, Phillips is a familiar face around the Clemson football program. He spends most of June as one of the athletic trainers at Swinney’s youth camps; making his way from station to station in his familiar golf cart and rendering assistance where needed. Phillips has spent 48 years as an athletic trainer, so he knows a little bit about concussions.

He makes the trip from Pelham to Clemson most football Fridays – he has a spot waiting for him in the Swinney household – and stays until Sunday. On this particular Sunday, Phillips grabbed Clay Swinney (the youngest Swinney) and drove over to the Swinney-Renfrow apartment to check out the Tigers’ beloved receiver.

What he saw didn’t sit well.

“I walk in, and Will is there, and Camilla (Renfrow’s fiancé) is there, and I see Hunter dressed in his hunting clothes,” Phillips said. “I said, ‘Where do you think you’re going?’ And he told me he was going hunting. I said, ‘No, you’re not. At this point you have two options – you can take those pants off and go rest, or I can take them off of you. Your choice.”

Renfrow decided that Phillips was bluffing and headed for the door. There stood Phillips, hand on his phone.

“He told me he was going to call Coach Swinney,” Renfrow said with a laugh. “I told him there was no need to do that. That he didn’t need to call.”

Phillips laughs at the memory, saying, “I had my finger on the button, but I was actually dialing Clay, but Hunter didn’t have to know that.”

In the corner, Will Swinney had his cellphone in his hand, and his laughter is about all that can be heard on the recording.

Renfrow saw his roommate’s laughter and tried to make another break for it, but Phillips once again stood in the doorway, hand on the phone. Then Phillips asked Camilla for a tool of the athletic trainer’s trade – scissors.

“I asked her if there were any scissors, and she handed me a pair,” Phillips said.

Renfrow now saw that Phillips had a phone in one hand and scissors in the other.

“I really didn’t know what he was doing with the scissors,” Renfrow said.

Phillips then informs Renfrow that he has three options – he can take the pants off himself, we can hold him down and take them off, or I could cut them off of him” Phillips said. “I’ve been a trainer for a long time, and I didn’t want him out in the woods by himself the day after suffering a head injury. You just never know what can happen.”

Renfrow made his way over to a recliner, where Phillips approached him with the scisscors. As Will Swinney laughed and told Renfrow "you've lost all your dignity" Phillips mimiced cutting the pants off with the scissors. Phillips then yanked off Renfrow's pants and made his escape, content that he had helped save Clemson's season.

“I told him to take off his clothes and hand them to me,” Phillips said. “I told him he would get them back the next week, and he could do whatever he wanted to do then.”

For the record, Renfrow returned to play the next week and caught five passes for 80 yards against South Carolina.

He also got his pants back.