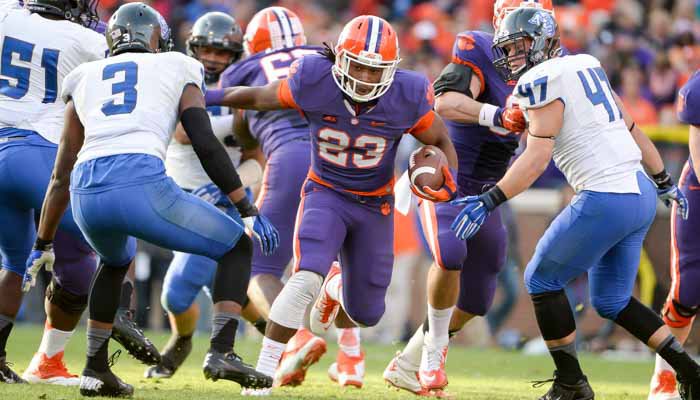 Dye's 124-yards rushing was the most by a Clemson RB this season.

Tyshon Dye
RS Fr. Running Back
#23 5-11, 214
Elberton, GA
View Full Profile was cast into the fray Saturday and he responded with a big effort.

History tells us that when Julius Caesar crossed the Rubicon in 49 B.C. to take his armies into Rome in defiance of the Senate, he uttered that phrase. It’s meaning? That he had passed a point of no return, and the meaning in old Latin is said to mean, “Let the game be ventured.”

With Saturday’s effort, Clemson’s offense may have passed a point of no return as Dye ventured into the game and responded with a 20 carry, 124-yard effort that stands as Clemson’s best rushing effort of the season. He also scored two touchdowns as Clemson rushed for 209 yards overall.

Dye, who has battled numerous injuries during his time on campus, made his season debut two weeks ago at Wake Forest and responded with a few late carries. He didn’t play last week at Georgia Tech, so to see him get the bulk of the workload Saturday was a surprise to everyone except Clemson head coach Dabo Swinney

“I didn’t have a number,” Swinney said. “I just told Tony earlier in the week that we’re going to feature him this week in the first quarter and really challenge him and see where it goes. See how he responds from there. I was just really pleased. He needs it. He needs all the work he can get. Like I said, he can take a lot of confidence from that game and we can keep building from there.”

Dye had back surgery during his freshman season, and he then tore his Achilles heel last February. As a result, he wasn’t cleared to play until Clemson's homecoming game against Syracuse and didn't play until the Thursday night game at Wake Forest two weeks ago when he had five carries for 14 yards.

Following Saturday’s effort, he said he was thankful for his chance.

“I needed it to actually get the playing experience and to build my endurance,” Dye said. “This gave me a lot better feel for the game. It’s a blessing because I know there are not many people that get these opportunities. I just tried my best and tried to take advantage of it. It has been a long road. There have been a lot of bumps and bruises along the way, but I did not want to give up.

“I stayed positive because this is what I wanted. I just kept working hard for it.”

"He's gotten a little bit more every week, and it was really good to see him. I thought he did a really good job setting up his blocks, and (he is) so well deserving,” Morris said. “The young man that's been through everything he's been through over two years, and to see him come out and have the success that he's had, he's just getting better. He's getting in football shape, and (we) have a great mix-up with him and Wayne. I think that's definitely a sight for the future and what's coming."

Wayne Gallman
RS Fr. Running Back
#9 6-1, 209
Loganville, GA
View Full Profile carry the load for the Tigers next week against South Carolina, and Dye said he would welcome the chance to get another 20-carry day.

“I’m just going to do what Coach Morris, Coach Swinney and Coach Elliott tell me to do,” Dye said. “If they call on me, I will be ready. I will work hard and prepare the best way I can for next week. I’m feeling good.”