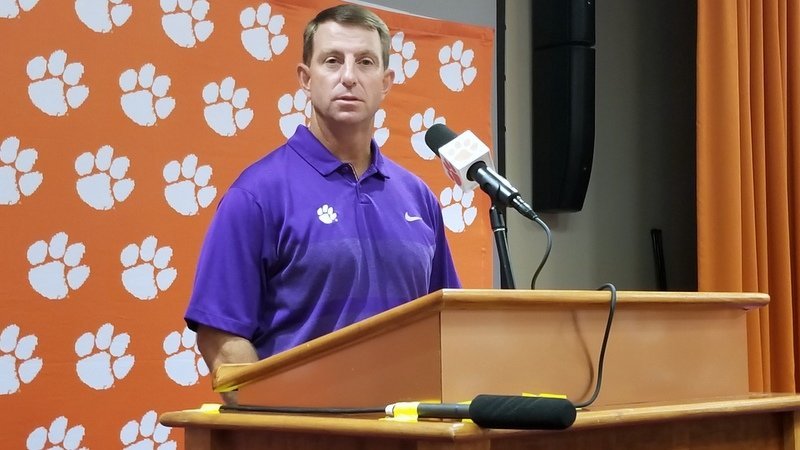 Swinney reflects on 9/11 during his Tuesday press conference

CLEMSON – Even if you weren’t in Manhattan or Washington D.C. or Pennsylvania, every American remembers where they were and what they were doing on September 11, 2001.

While the events of that fateful day 17 years ago are now being taught in history books, if you were old enough to remember the chaos and the emotions, those memories never seem to fade.

For Dabo Swinney, he was out of coaching and in the corporate world going through his usual routine when what he knew as normal was put on hold.

“I was driving from Tuscaloosa. I was out of coaching in 2001 and had been working at AIG Baker for six months,” Swinney said during his Tuesday press conference. “It was about an hour and 15 or 20-minute drive every day from Tuscaloosa to 280. I was on 459 and I was listening to one of the radio stations talking football. I used to use that time as prayer time and quiet time and I'd catch up with what was going on in the sports world. I was my first time not coaching so I was thinking about what I had to do that day at work or whatever. I'll never forget it.

“I was telling Kath (Kathleen Swinney) last night that I couldn't believe it was 17 years ago. I was driving down 459 in my green Tundra. I was driving down the road and they came over and interrupted the radio and just started talking about that there had been a plane crash but they didn't know what was going on. Then all of a sudden, everything gets consumed on the radio I'm listening to and in my mind, I'm going, 'Man, this can't be real.' It was a very surreal moment. I listened on the way and then I got to the office and it was a very emotional day.”

Like most of us, the emotions of that day are difficult to put into words for Swinney.

“It was an incredibly emotional day for everyone. It was a scary day,” Swinney said. “As a company, there was nothing done that day. We sat and we watched TV and we listened and nobody could believe what we were seeing. It was just heartbreaking and gut-wrenching and incredibly emotional. I just remember thinking about my three year old and my two year old and the world that they're going to grow up in. It was unbelievable. It impacted so many things in this country.”

Despite being the head coach of the second ranked Clemson Tigers, Swinney said he’ll take time today to reflect on his memories of that day and those who lost their lives, including former Boston College lacrosse player Welles Crowther, who died saving other from the World Trade Center.

“I think it's great to take some time today and pause and reflect on all of the people who lost their lives, the impact that it had on all of their families, the children who lost moms and dads,” he said. “Then all of the unbelievable brave and heroic people that I saw that day. The old saying, there's a difference between running away from a fire and running to it, and people who were running through it and to it, it was amazing heroism from so many people. The policemen, the firemen, the first responders that lost their lives trying to save others.

“I know there are a lot of people out there today whose lives were saved because of the sacrifice of others. I think about the kid with the red bandana (Welles Crowther). I think about his parents. In fact, I've still got the red bandana and carry it my briefcase. It stays in my briefcase. I think about his mom and dad and how this kid saved others people's lives. You never know how you might respond in a situation like that, but an incredibly difficult day for our country. I wasn't alive during Pearl Harbor, but I can imagine it was probably a similar feeling for this country. Hopefully, it's not something we ever have to deal with again. It was a tough day and one I'll never forget.”