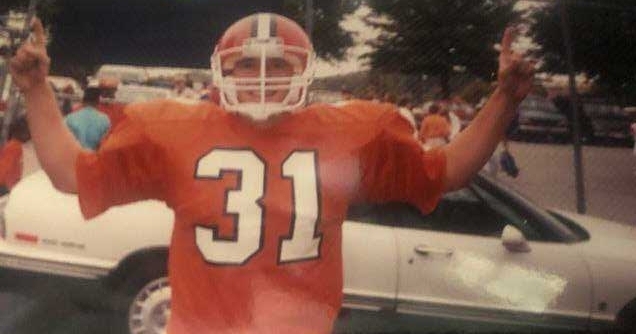 Britton celebrates after getting tossed off the sidelines.

There is a scene in the original Jurassic Park movie where Jeff Goldblum’s character peers out of the Jeep at dinosaurs walking the landscape and he utters the words that have become famous.

Those words were probably uttered by Bubba Britton’s dad just after the Tigers ran down the Hill against Duke on Homecoming in 1992, when Britton successfully ran down with the team despite being dressed in less than a regulation uniform. It’s a story that needs to be told.

Britton, class of 1997, is currently the Director of Philanthropic Initiatives for the Clemson Alumni Association. His love affair with the Tigers has been lifelong, but the story of how he ran down the Hill with the Clemson football team – and got away with it – had its beginnings prior to the 1992 season. His brother, Jim “Shaggy” Britton, was an equipment manager from 1988-1992. Jim finished school in the spring of ’92, but during his time with the team he had brought home the occasional cracked helmet or old pair of football pants.

Britton was a senior at Chester High School that year and played football – he called himself the best backup tight end in the state of South Carolina – and quickly realized his dreams of playing for the Tigers wouldn’t come to fruition. So he decided to take matters into his own hands.

“At the beginning of the season, at the first game, I told some friends that I was going to figure out a way to run down the Hill. Fast forward a few weeks, and I kind of decided the best way to do it was back myself in a corner and tell everybody I was going to do it,” Britton told TigerNet. “I started on Monday. I told everybody I was going to do it that Saturday. My plan was that after my game on Friday, I'd load up my shoulder pads and my leg pads and all that stuff, and then I would take a pair of the Clemson pants, and the jersey, and the helmet, and go up to Clemson after the game, and stay with some friends who were already in school up there. Then get up the next morning, tailgate with my family, and about an hour beforehand, I'd put on the uniform and make my way to go hide behind a car parked behind the Hill.”

Britton did just that – he tailgated with his family and then changed clothes before heading to the Hill. However, he was “discovered” by a famed politician.

“One of the funniest pieces is, of course, that November was an election year. It was an election year and Fritz Hollings was going around campus doing some campaigning,” Britton said. “I started making my way over to the Hill after changing in the car in Lot 1 and started heading over there. He (Hollings) sees me and beelines over to me, pats me on the shoulders, and says, ‘Have a good game today, son,’ in his very, very big Charleston and Southern drawl. All I could think of was certainly he knows that there wouldn't be a random football player all by himself walking around campus.”

Once the conversation with Hollings ended, Britton waited behind a parked Suburban and drew plenty of stares. He told the onlookers what he was attempting to do and drew a crowd.

“There were two buses. Back then, and maybe it's still the case, there would be two big buses, and then there would be some CAT buses behind that, that I always just assumed were redshirts, and walk-ons, and things like that. My jersey didn't have a name on the back, but back then usually you would have some duplicate numbers, not like today where you have somebody on offense, somebody on defense. A duplicate number usually meant that it was a walk-on. I was not a walk-on or a redshirt.

“As the two buses came up, what I did was I just kind of jogged in between the first two buses to make it kind of look like maybe I just come from one of the CAT buses in the back. I guess I really didn't time it that well, because I was right near the front. But as I was approaching Howard’s Rock Will Young looked back at me. He had this look on his face almost like, ‘I know what's up here.’ Later as I became a student the following year and subsequently, Will and I became pretty good friends. He told me for years that he knew as soon as he saw me that I wasn't supposed to be there. Maybe my jersey was a little faded from being older, maybe it was just he could recognize all of the guys on the team and he knew he had never seen me before. But he let it go.”

Britton knew when he looked out over the sea of orange that he was past the point of no return.

“So there I am with my hand on the Rock, the band comes down, they blow the cannon, and down the Hill I go. Of course, the old saying is that you as much try not to fall down the Hill, as you do run down the Hill, but the crowd's going crazy. It's Homecoming. Even though it was Duke, which wasn't a big game, it was Homecoming, so the crowd's going crazy. Back then in the early '90s, it was popular for the players to put their arms out like an airplane. I'm going crazy and I have my arms spread and I am doing the airplane. I get to the middle where we were going through the tunnel made by the band. I get to the sidelines and I jumped in with the big group of guys. As they got ready to get ready for kickoff, that's when it dawned on me that I really didn't have an exit strategy.”

Britton’s father was waiting for him at the old locker room entrance next to where the West End Zone now stands, hoping that his son could make it off the sidelines before being discovered. It didn’t happen.

“Before I could do anything, Doc Hoover grabbed, and he's saying, ‘Who are you? What do you think you're doing?’ Doc, having been there for decades, I'm sure it didn't take long for him to take a look at me and tell something was off. Not to mention that the funniest part if that I was wearing number 31. Well, out of a hundred-plus players, I noticed that when Doc Hoover grabbed me, that literally next to me was standing Derrick Witherspoon, who would go on to play years in the NFL for the Philadelphia Eagles, and he also wore number 31. He was a running back. He was about 5'9, 5'10, and African-American. I'm a 6'3" white guy. Out of everybody, we're pretty much wearing the same number. Again, it wasn't as common then as it is now. 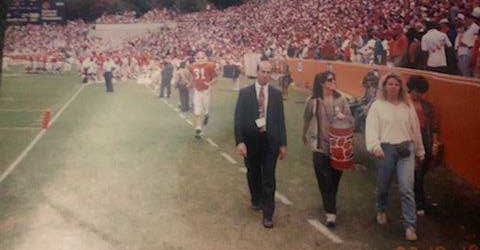 Britton runs off the field after his caper

“Doc Hoover's yelling at me, ‘Who are you? What do you think you're doing?’ About that time, this strength training coach came up and was like, ‘Doc, I've got this.’ He puts his arm around me sternly, and man, he looked like Mark McGwire. He has got the red goatee. He's at least as tall as I am. He is enormous. Of course, there is a bit of fear hitting me at this time. He goes, ‘Son, what do you think you're doing?’ I said, ‘M-m-m-m-man, I just want to r-r-r-run down the Hill.’ As soon as I said it, and it came out that way, he started laughing. That's when I thought first I thought to myself, ‘I think I'm going to be okay.’

“He got to talking to me a little bit more and kind of asked me about the whole thing. I said, ‘Well, I kind of snuck in. I just want to run down the Hill.’ He said, ‘Look here. I'm going to point down to the security guard down at the west end zone. You get on out of here.’ He said some choice words, saying, ‘You take you and your blank and get the blank out of here.’ I ran down that way, and of course, my father was down there. I think he assumed there might be a possible arrest or something that was going to happen. He was down there and took the pictures of me coming off. After I got out of the field, I went out to the car, changed clothes, and then took my ticket and went back into the game and watched the rest of the game with my parents.”

Britton had stuck his game ticket in his shoe, just in case he was caught, so he could show security that he had a ticket to the game. However, it wasn’t needed, and as he changed clothes, he realized he had gotten away with something a little crazy and a lot special.

“That's kind of the gist of it, if you will, but a thrill few will ever experience. I recognize it's probably something that the Athletic Department wished hadn't taken place or would hope that no one else tries to repeat it,” Britton said. “Thank goodness, I didn't get in any trouble for doing it, but it was certainly an experience that I'll never forget. When people say it's the most exciting 25 seconds in college football, I don't know if that's the case, but certainly, probably the most exciting 25 seconds of my life.

“It’s been something that I didn’t have a full understanding of how I could get into trouble and I was probably a little bit naive. So I went out there and way exceeded my expectations. Of course, my parents had taken me to pretty much every game since I was about two-years-old. They took me to the National Championship game at the Orange Bowl on January 2nd, '82. Of course, subsequently, seven years ago I finally was able to get a job working for the University. Thank goodness that little dalliance didn't prevent me from getting a job on campus.”