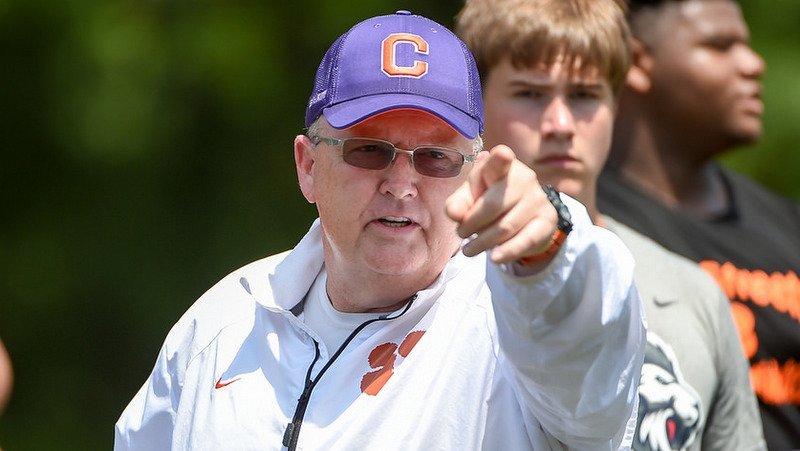 Caldwell thinks his offensive line has depth and versatility

SUNSET - Offensive line coach Robbie Caldwell feels like he has more options and more depth than he has had during his eight-year career at Clemson.

With senior left tackle Mitch Hyatt returning to anchor a veteran unit and several up and coming lineman, Caldwell is confident heading into the 2018 football season.

“I really like that everybody has played a couple of different positions,” Caldwell told the media earlier this month at Dabo Swinney’s media golf outing. “For example, John Simpson’s played some tackle now, Justin Falcinelli plays guard and center, Gage Cervenka is guard and center, Cade Stewart plays all three, center, guard, and tackle. Only the youngest ones have we not moved around too much.

While Caldwell has veterans – Hyatt, John Simpson, Justin Falcinelli, Sean Pollard and Tremayne Anchrum – returning, he said he’s not surprised his group isn’t garnering the same attention as the defensive line, which also has all four starters returning.

“Well, first of all, I will address the first question, none of y'all like talking about offensive linemen,” Caldwell said. “We don’t have any statistics or nothing, but we are the first to get blamed! I understand that, it’s the nature of what we do, and that’s why we are different than everyone else. They are wonderful people. Mitch coming back has been remarkable for the group, not only his leadership but his work ethic is just… he never says a word, he just doesn’t. So, the fact that he can help teach these young ones by being an example and get across what I am trying to get them to do, it’s just remarkable.

“The fact that you have the tackle position over there, we move one out, put him at guard, they’ll still play both so it kind of balances out, Tremayne (Anchrum) can play either side, but the fact that Mitch is there to help me bring some of these young ones along, is great value to the program.”

In addition to the starters, Caldwell said he feels like he has a good nucleus of reserves – Blake Vinson, Matt Bockhorst, Noah DeHond, Gage Cervenka, Cade Stewart and Chandler Reeves – who are ready to contribute.

“I think they are going to play a good role. I don’t know, you know typically Blake and Matt, they missed their senior year, so getting back into the swing of it,” he said. “And then, you have Noah DeHond, one of the ones we redshirted. Noah did play his senior year. He has a little injury that we are working through right now, but the other two have really come on and added bulk, added strength and obviously knowledge. The speed of the game is really coming down to them now, or they are moving up to it.”

Caldwell said he has been most encouraged by the reports coming out of summer workouts.

“Listen, I know it’s cliché, but every one of them,” he said. “I looked at the records yesterday, everybody’s gone up in weight, and everybody’s gone up in strength. Coach Batson and his crew, and Paul Hogan, who works directly with the offensive line, they have just been phenomenal. He teaches the technique, he’s an old lineman himself so he knows what they go through. They are running better; you know those are big guys, so I’m excited about that.”

“He’s got a little problem with his shoulder right now. He’s about to get back to full speed. We’ve been holding him back a little in the weight room, but he’s put on five pounds.”

**We will have more from offensive line coach Robbie Caldwell in the coming days, including breaking down the redshirt freshmen and a discussion about offensive line recruiting.