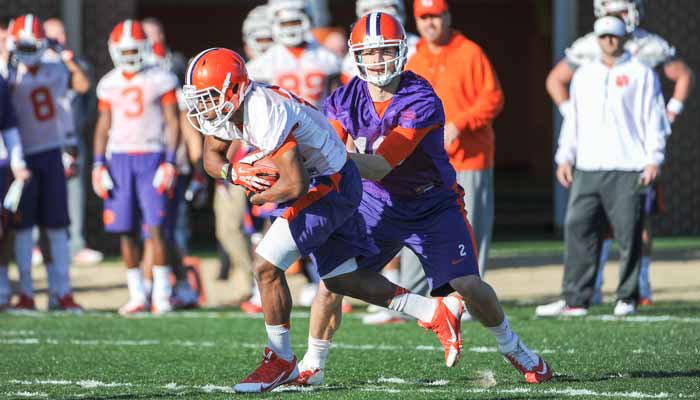 CLEMSON – As the 2014 Clemson football team took the field Wednesday afternoon for the first spring practice, “The Boys are Back in Town” was blaring over the loud speaker at the indoor practice facility.

That can only mean one thing – football is back, at least for a little while, and Clemson head coach Dabo Swinney

“Good energy out there today,” Swinney said after practice in the indoor practice facility. “We have the makings of a good team, but we aren’t there yet. It’s the first day, but you’ve got to start somewhere. Now we’ve got something that we can take back to the film room and look at this year’s team. We’ve been looking at last year’s team for a long time. It’s a good start for a lot these guys.”

Deshaun Watson
Fr. Quarterback
#4 6-3, 190
Gainesville, GA
View Full Profile sporting the retired No. 4 of Steve Fuller, but Swinney said that the agreement to bring that number out of retirement was made last spring.

“That’s been set since last May. Obviously, he was number four. It’s something that Steve and I talked about last May over dinner,” Swinney said. “We play in a golf tournament together, so I get to spend three days with him every year and we always have a lot of fun. It came up in conversation and I asked him if he had a problem if Deshaun brought his number out of retirement. I told him that it would be really cool to have a Steve Fuller patch on the jersey. Every time Deshaun practice and every time Deshaun Watson plays in his career, Steve Fuller is being honored. It has been a long time since Steve Fuller played at Clemson, so it’s cool to give up recognition for the things he did. He was a phenomenal player and set a standard for that position and for that number. It was his call and we are very appreciative that he decided to do that.”

With the topic of Watson coming up also brought the discussion of Clemson’s quarterback battle, and offensive coordinator Chad Morris

However, Morris said that the quarterback position won’t be won or lost during the first few days of practice.

Other news and notes

“He has changed his body composition. It’s not as much about the weight as it is about the muscle mass,” he said. “Lisa Chan does a great job with our nutrition with these guys. They are constantly in the bod pods and they are studying those things. Kalon has done a fantastic job. He is a big man, but he can move. I’m really proud of him for how he has changed his body. He’s really cut his body fat. He’s still a big, heavy, strong dude.”

* Swinney on the depth at linebacker

“At SAM, if we get into some nickel stuff, it’s going to be Korrin [Wiggins],” Swinney said. “Travis [Blanks] isn’t here right now, but he’s going to move back up to that spot. So it will be him, Korrin, T.J. Burrell

T.J. Burrell
RS So. Linebacker
#41 5-11, 215
Goose Creek, SC
View Full Profile , Dorian O’Daniel are the main guys right now. If we were playing somebody today that was a 21 personnel type team with a tight end on the line, we would probably move B.J. [Goodson] over there or somebody with a little bit more size.

“[Ben] Boulware will cross-train at MIKE and WILL. Tony [Steward] is at WILL and Stephone [Anthony] is at MIKE. Kellen [Jones] is also capable of playing MIKE and WILL, but he’s not going to do any contact this spring. He’s doing good and looks good with his rehab. Dorian O’Daniel could probably slide over and play some WILL for us, too.”

*Morris detailed what he saw out of his running backs.

D.J. Howard
RS Sr. Running Back
#22 5-11, 195
Lincoln, AL
View Full Profile is obviously a veteran. Out of all the positions we have, that is probably the deepest we have. But everybody looks like an All-American in pads and shorts.”

*Morris said the Tigers also have to run the football better this season.

“We have to be a more run-oriented football team,” he said. “We hope to have that. I think we can all agree we got absolutely all we could get out of Hot Rod McDowell. For him to rush for 1,000 yards was amazing. But now we have depth and we need to run the football better.”

“There were some times we had to point, and tell him what direction we are going,” he said. “He is just a young guy, but he will get better.”

*Morris visited Auburn earlier this month, where he met with Auburn head coach Gus Malzahn. The focus? Running the football.

“They ran the ball as well as anybody in the country,” Morris said. “There are some things they do that are real similar to us. But in the end it comes back to basic fundamentals of blocking up front and working hard. We may only get 60 percent of the offense this spring, but we are going to get good at what we do.”