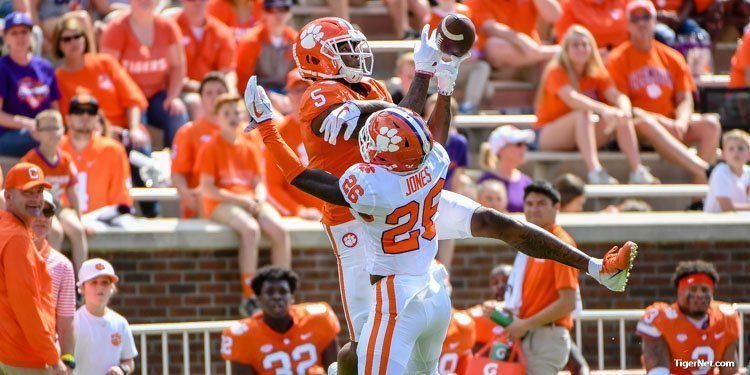 Sheridan Jones breaks up a pass during the spring game

A little later this afternoon, the 2019 Clemson football team will begin to stretch in the indoor practice facility as The Boys Are Back In Town blares from the speakers. That means the start of fall camp and the first game of the season is 27 days away.

Clemson, the defending national champion, will enter the campaign with the top ranking. It is the first preseason No. 1 ranking for the Tigers in the history of the coaches poll. Clemson received 59 of 65 first-place votes

The media will meet with head coach Dabo Swinney prior to the start of practice and then will be allowed to watch the first few periods of the initial practice. What will be watching not only Friday but all of fall camp?

Punter Will Spiers has been inconsistent during his tenure and will be pushed by Aidan Swanson. Swinney said that Spiers had his best spring and it’s hard to imagine Swinney making any kind of a chance at this spot. However, it will be interesting to see if Swanson makes some noise during fall camp. Swanson averaged 41 yards per punt during the spring game.

Kicker BT Potter was also inconsistent during the spring and faced stiff competition from senior Steven Sawicki. Potter will be the kickoff specialist but could be pushed by Sawicki. And, whoever wins the job in fall camp will have to keep it once the season starts. A couple of big misses, unlike at punter, could mean a big change.

Only two players returned a punt for Clemson last season – Amari Rodgers and Will Swinney. There were a few that were fair caught, but just two players actually returned a punt. With Rodgers on the shelf for the foreseeable future, someone will have to step up and win the job.

Freshman Jaelyn Lay checked in at 273 pounds Thursday. Yep, 273 pounds. The true freshman hit the wall during the spring and still has a lot to learn, but his unique blend of size and athleticism makes him a matchup nightmare. The coaches won’t hesitate to go with other options as a blocking tight end, but the absence of Braden Galloway means Lay is the big receiving threat. How quickly he learns the playbook will determine how quickly he climbs the depth chart.

There are multiple storylines to follow on the line. Assuming that Xavier Thomas starts at one of the defensive end spots, who will start on the other side? Justin Foster has my vote, but KJ Henry and Justin Mascoll and Logan Rudolph will all push for playing time.

At the tackle spot, it will be interesting to see if Nyles Pinckney and Jordan Williams start out in yellow jerseys. Both players missed spring practice after surgeries but have both been cleared to resume football activities. How good do they look? We will know a little later today. Xavier Kelly and Tyler Davis might have to provide some weight in the interior part of the line.

Can Derion Kendrick secure a starting spot at corner?

Head coach Dabo Swinney and defensive coordinator Brent Venables have both said that Kendrick is the starter heading into fall camp. Swinney said there was one point during the spring when more than one corner was injured and Swinney decided to let Kendrick take his shot. He delivered in a big way, but veteran Mario Goodrich and newcomers like Andrew Booth and Sheridan Jones will push for playing time.

The offensive line is one of the better groups on the team, but there are questions. Will Sean Pollard grab the starting spot at center? Can Jackson Carman take over at left tackle? Will Gage Cervenka have to move back to center, and if he does, what happens at right guard? Also, offensive line coach Robbie Caldwell hinted that redshirt freshman Jordan McFadden is ready to play now. Where will he end up?