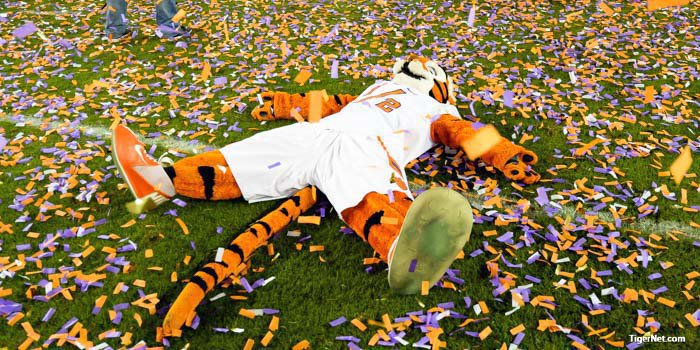 Even the Tiger Cub got in on the celebration

Those few moments, in the aftermath of Clemson’s National Championship win over Alabama, are something I will never forget.

Some people don’t like these types of columns – they prefer straight news with very little emotion. But I work for a website that just covers Clemson University, and I feel like part of my directive is to make you feel like you were there with me.

Telling a story – isn’t that part of what I am supposed to do? Let’s begin, because Monday night begins and ends with confetti.

I’ll start with pregame. We got there early, I did a television shot for Fox down in Columbia and then waited on the Clemson team to arrive. The coaches and players walked off the bus and took their first trip to the field, and I walked down the tunnel with one Clemson staffer who was singing I Gotta Feeling by the Black Eyed Peas. The part that got me, because he didn’t let off the volume when he got to “tonight’s gonna be a good night, that tonight's gonna be a good, good night.” I knew right then that the Tigers had the belief they could knock off Alabama.

The game had its ebbs and flows, and it’s always neat to see a game in person while following along on Twitter. When Wayne Gallman fumbled early in the third quarter, more than one national pundit tweeted that it was “game over.”

Those of us who covered Clemson all year knew better.

Then the Tigers scored 21 points in the fourth quarter, and the Tigers were able to celebrate in style. My boss wanted me down there to grab a camera and take pictures of the celebration, but I couldn’t leave the press box. When the game is decided with one second to play, I had to write and post the gamer before I went down.

So I sent Nikki down with about six minutes remaining – Raymond James Stadium has just one elevator that serves the press box and suite level on that side of the stadium, and she needed to be down there when the final gun sounded.

I am glad I made the call to send her down, because she was down on the field, on the sidelines, when her school won the National Championship. It was the first of her lifetime, and when I finally made my way to the grass she saw me and she was bawling. I gotta admit, seeing her so emotional - well, let's just say the confetti got in my eyes and caused an irritation.

She told me before the game that she didn’t know if she could be dispassionate about a Clemson victory. She told me she might cry – she’s a graduate and she works there and I told her I get it. We shared a quick hug and a kiss and then we parted ways to record the celebration as best we could.

As I wandered around this incredible celebration, I kept running into the guys who made this kind of moment possible. Brentson A. Buckner was almost in tears, and said, "I can't believe I just saw Clemson win the National Championship." Brentson and I spent a few moments together out in Phoenix before the Fiesta Bowl, and we talked then about the possibility of Clemson winning a title. Seeing that big warrior that emotional - well, confetti again.

Then I saw Brandon Thompson, Shaq Lawson, Jacoby Ford and Andre Branch, and I made sure they knew I thought they were just as responsible for that celebration as anyone else. Those guys laid the foundation for what Dabo Swinney has built at Clemson.

And then there was my buddy, former Clemson player Henry Guess, who is without a doubt one of the world's nicest people. I saw Henry doing a little jig and waving a National Championship towel, and well, confetti.

As a sportswriter, I am supposed to keep out of the fray, to catalog and appraise and keep an even temperament. But it's hard - in many ways, I work with these people, work with these players, and to see them finally let loose in all that joy. Well, confetti. These are kids I’ve known and talked to since they were freshmen or sophomores in high school. You build relationships with them, with their parents, and it means something to see them so happy.

I told people before the game that I didn't have a doubt Clemson would win the game, and that I would see them in the confetti. I was right because what you saw was a team that loved each other, had an incredible will to win and left everything out there on that field.

And then I saw Christie Clary leaning over the railing. That is Jay Guillermo's mom, and I don't think people realize what these parents go through with their kids. To see her so emotional, knowing her son won a title on the last snap of his Clemson career....well, confetti. She couldn’t contain her tears, and I knew she wanted to be out there on the field with her son. All of those parents wanted to be out there.

I watched these current players, coaches and staff members celebrating with their families, and then another of those moments happened. Coach Swinney – on the podium – saw Jim Phillips in the crowd, and he waved him over the podium and shared a private moment with the old coach.

For those that don’t know, Jim Phillips is one of Dabo’s former coaches from Alabama. He still lives there, but he’s a constant presence around the football program, helping out in any way possible. He’s good people to have around, and to see that quiet moment between the two, well, it meant something.

I finally ran back into Nikki, and she was still very emotional, and we headed into the locker room area to do our postgame interviews. As Deshaun Watson passed by me on his way to do his postgame interview in the main area, I mouthed a silent “thank you” to him, and he smiled that big smile of his and nodded, and said, “I got you.”

Once we finished writing (about 3:30 in the morning at this point), we got on the elevator to head out of the stadium, and we were on there with Yahoo writer Pat Forde. He looked at us, smiled, and said, "I imagine this is quite a night for you guys."

You have no idea, Pat. No idea. And those aren't tears. It's that darn confetti.