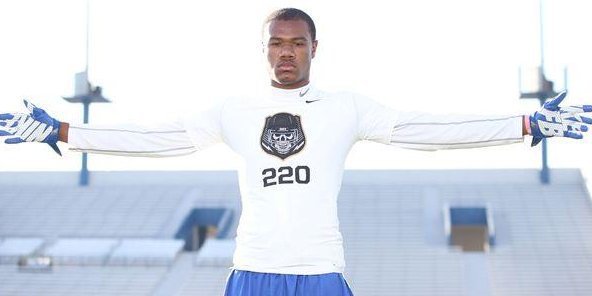 Mustapha Muhammad’s recruitment is just getting started, but he’s already attracting offers from all over the country, including one from Danny Pearman and Clemson.

The Tigers pulled a tight end from Texas in 2016 signee J.C. Chalk and Clemson hopes to land another after offering Muhammad, a 4-star 2018 prospect from Missouri City (TX) Ridge Point.

Muhammad told TigerNet Wednesday evening that received the offer earlier in the week when he called Clemson’s tight ends coach.

“I called Coach Pearman on Tuesday and he was the one that let me know about the offer,” Muhammad told TigerNet recently. “I was really excited about the great opportunity from Clemson. The offer is definitely a blessing.”

The 6-5, 230-pound prospect doesn’t know a whole a lot about Clemson but he does know the Tigers are one of the country’s elite teams and he does know a little about Dabo Swinney.

“I know they competed in the title game against Alabama. They have an awesome coach in Coach Swinney,” he said. “He has a great personality and is very relatable to his players. I’ve talked to Coach Pearman the most because he’s my recruiter.”

Living in Texas, Muhammad has never traveled to Clemson, but he hopes to make it for a visit soon.

“I’ve never been to Clemson before, but I definitely hope to visit them in the future,” he said. “I would love to make the trip. I have going to go to a couple of camps this summer. I believe second week in June I am going to Oklahoma State. I’m going to LSU in July. Those are the only ones I have planned right now.”

He said that he is wide open in his recruitment and he won’t be making a decision any time soon.

“Clemson, among all of the schools who have offered me have a shot. I believe that all of my offers are equal to me right now,” he said. “I don't have a top 10 or anything like that. At this time, I am just keeping all of my options open basically. As of right now, I plan to make my decision on National Signing Day 2018. I want to make it a surprise and make it special for all of my supporters.”