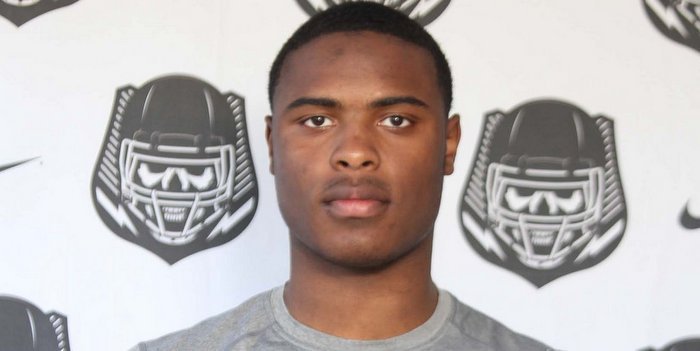 Cordarrian Richardson says he's pushing himself a little bit this time of year, but it's no big deal.

“I get tired sometime, going straight from football practice to track practice,” he said. “But it keeps me in shape.”

The 6-foot-1 Richardson – a consensus four-star running back who on March 6 verbally committed to play football at Clemson in 2017 – runs a 4.4-second 40-yard-dash. He said he never got tired while leading Memphis' Trezevant High School to its first-ever Tennessee 2A championship, despite a Herculean workload.

In the 40-35 victory over Marion County, he tallied a state-record 342 yards on 41 carries while accounting for four touchdowns – three on the ground and one passing. (He played quarterback, his original position, for a couple of series in the first half.) He was undaunted by the number of times he was handed the ball, he said.

“I wanted it,” Richardson told TigerNet by phone this week. “I wanted it.” He said winning the state title was vindication for the Bears, who lost in the championship game during Richardson's sophomore season. (He was named MVP in that game as well.)

“I had to overcome everything (the previous year's disappointment) to pull it out for us,” he said. “Coach (Teli White) was depending on me a lot.”

White told TigerNet that in his nine years as a head coach, he has encountered only one other player with Richardson's degree of natural talent.

White watched Richardson grow up to become the bruising, intimidating back that he is today.

“I saw the kid when he was playing in Pee Wee (football) and in middle school, and I was just like, 'Man, that kid's different. He's not a regular kid.' ”

Likening his star running back in some respects to former NFL greats Marshall Faulk and Marshawn Lynch, White said that recruiting coaches who watched Richardson's highlight films were taken aback by his rare combination of size, speed and agility.

“He's 220 pounds and he runs like he's 180,” White said. “For him to be at that size and with that strength, he's got good balance. He's got what you can't coach. … I've coached plenty of Division I kids, and most of them had to work to get what he's got.”

Richardson – who in his junior season racked up 2,239 yards and 23 touchdowns, including five on punt returns – said his approach to running is pretty simple: Confront, don't avoid.

“I mean, I can get outside if I want to, but instead of trying to avoid all those tackles, I will just run through you,” he said. “You've got to put in extra work to avoid (tacklers). But if you hit (a defender) the first time, he'll think about coming to you for a second time.”

Richardson has been taking extra courses in preparation for early enrollment in January at Clemson, where he'll initially focus his studies on pre-dentistry. He'll complete senior-level English at Trezevant this summer and have a typical fall semester as a senior, before departing after the holidays for Tigertown – a place he said felt right from the start.

“When I visited other schools, I didn't have the same vibe as I did at Clemson,” he said. “When I set foot (on campus) at Clemson, I had a different vibe. I just felt in my heart it was the place for me.”

Richardson might be the only running back the Tigers take in their 2017 recruiting class. He said the Clemson coaches – Dan Brooks, Robbie Caldwell and Tony Elliott were his primary recruiters – have told him he'll “fit in perfectly, that I'm coming in at a good time.”

Indeed, if he starts as a freshman, Richardson could potentially join another acclaimed running back, incoming freshman Tavien Feaster of Spartanburg, to form a potent backfield for the Tigers. He brushes off comparisons to Georgia's recent duo of bruising backs, Todd Gurley and Nick Chubb.

“Oh, we'll probably be more special than those guys,” he said.

His coach said that's hardly an understatement, adding that it's “almost scary” to think how good a player Richardson could turn out to be.

“If he gets there and buys in to what coach Dabo Swinney and them are preaching,” White said, “... and he goes even 85 percent, he's just gonna be a phenomenal ballplayer.”

White said Richardson's primary task will be to remain grounded and mentally focused – something he doesn't foresee as an issue.

“If he keeps his head on straight – and behavior-wise, he's not a problem – he's gonna be fine,” the coach said. “He's got a good, strong support system....