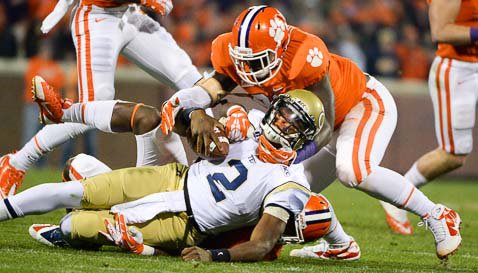 Things were tense on the Clemson sideline late in the Orange Bowl against Ohio St. last January, but Stephone Anthony

Stephone Anthony
Sr. Linebacker
#42 6-2, 235
Polkton, NC
View Full Profile came to the rescue, and Anthony will be the anchor for what should be a stellar Clemson defense in 2014.

Tajh Boyd
Quarterback (2009 - 2013)
#10 6-1, 225
Hampton, VA
View Full Profile had just thrown his second interception of the Orange Bowl to give Ohio State good field position with less than two minutes to play. The Buckeyes trailed the Tigers by five and stood ready to drive starting from the Tigers’ 48-yard line. On the first play from scrimmage, however, quarterback Braxton Miller was intercepted by Anthony, ending OSU’s hope of finishing the season off with a win. The Tigers would run out the rest of the clock for a 40-35 victory.

Anthony started all 13 games for the Tigers in 2013 for a total of 802 snaps. He led the Tigers in tackles with 131, including 13.5 for a loss of yardage. He also had four sacks, five PBUs, three quarterback-pressures, an interception and a fumble recovery. For his career, Anthony has played in 39 games and started 23.

Anthony told TigerNet in the spring that he felt like returning was his best option, but he also knows he can’t rest on what he accomplished last season.

“It was definitely the best thing for me. After sitting down with my family and talking for an hour or two, we realized that and I came on back,” Anthony said. “But to be great, you have to put the work in. People can say all they want to about us, but if we aren’t working we aren’t going to be there. We are going to set our own goals and our own expectations. It’s all about the work we put in. We have the personnel to do it. It was a tough decision but I made the right decision.”

Anthony was as good as any in the nation – his 13.5 tackles for loss in the top-10 among ’13 returners. He led Clemson in tackles seven of 13 games last year, but will have new starters beside him following the graduation of Quandon Christian

“I believe in all of those guys,” Anthony said of a group that includes Ben Boulware

Anthony said he has been doing yoga in an effort to improve his game.

“I am trying to loosen my hips up,” he said. “I’ve been doing yoga, trying to get loosened up and work on my change of direction. I am trying to get better with that. I was talking to my dad and my parents and Coach V (Venables). The receivers are getting smaller and I have to keep up.”