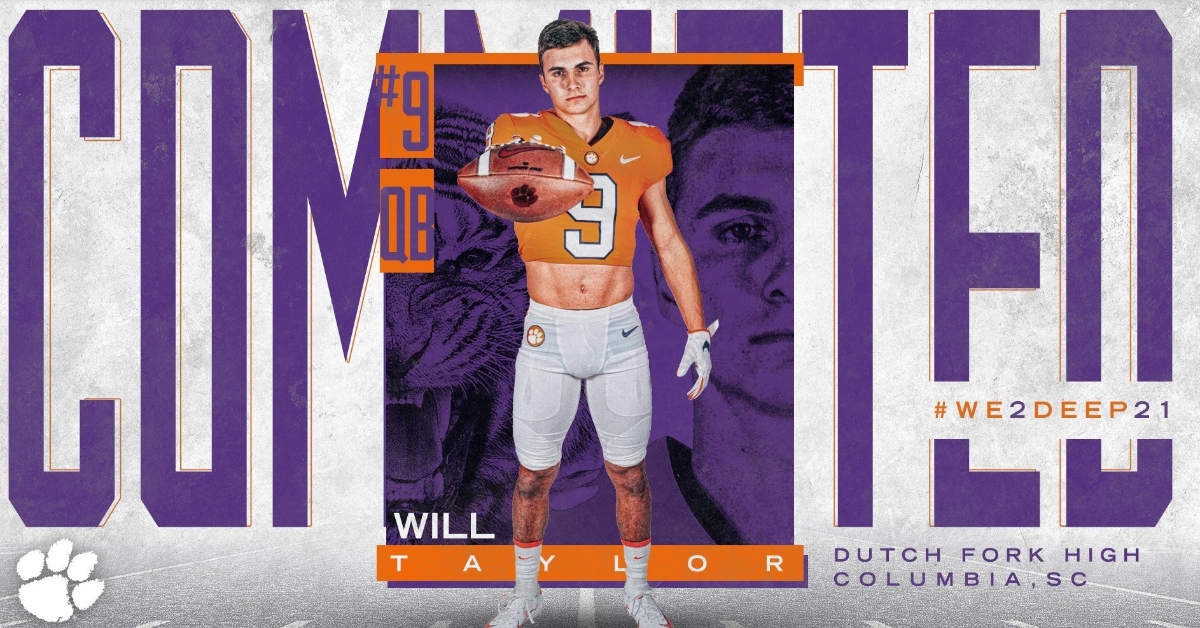 Two-sport athlete Will Taylor committed to Clemson football Wednesday morning, and he hopes to star in both sports for the Tigers.

The 2021 wide receiver out of Columbia (SC) Dutch Fork committed to Clemson football via Twitter. Taylor had already been a Tiger baseball pledge since last year but picked up a football offer recently, where he is being targeted as a receiver.

Taylor told TigerNet that, after talking things over with his family, he knew it was time to make a decision.

“It was really just me and my family. I'm just very thankful for the opportunity to play both sports,” Taylor said. “I felt like it was time to go ahead and get it out there. That's where I want to go, so that's what I decided.”

The Clemson culture and his relationship with wide receivers coach Tyler Grisham helped put Clemson over the top.

“The family, the culture, the coaching staffs - football and baseball - are great. It's just different than any place I've ever visited or been to,” he said. “Me and coach Grisham have a pretty good relationship. Before he got the receiving coach job and before coach (Jeff)f Scott got the job at South Florida, on my first visit to Clemson he was the guy that showed me and family around and then ever since got the receivers job, we've been talking. We've talked a lot over the past couple days about what's going to happen.”

Clemson baseball coach Monte Lee wants to give Taylor at shot at playing the outfield.

“I'm not sure where he sees me but he said I'll have a shot to play center field or in the outfield - wherever to get me on the field,” Taylor said of Lee. “I can play anywhere, wherever I get my shot to play, that's where I'll be. I've got some big some shoes to fill from Ty Olenchuk, who plays baseball at Clemson now.”

Playing quarterback mostly going into his senior year, Taylor racked up 1,647 yards passing and 1,549 yards rushing to go along with 19 touchdowns for the 2019 football season at Ben Lippen School.

Taylor plays quarterback for Dutch Fork this season and last week accounted for six touchdowns and more than 300 yards.

“It's been a good start and a fun year, and we should have a pretty good team this year, so I'm excited,” Taylor said.

After the Dutch Fork football team plays Friday night, Taylor will head to Frisco, Texas, to compete in the Baseball Factory All-Star game Sunday. Transitioning from one sport to the other is something that Taylor is used to.

“For me, it's not that hard. It's something I've been doing my whole life,” he said. “I've always played on Friday and then have to hit the road for a baseball tournament. Ever since I started, I've always finished a game on Saturday and hitting the cage at night. I'll be doing the same thing at Clemson, just on a much higher level.”

Taylor is also a three-time state champion in wrestling and is considered a possible early round selection in the 2021 Major League Baseball draft. Taylor is not an early enrollee and will enroll at Clemson next June but said he doesn’t have an idea what will happen with baseball.

“I'm not really sure. I'm still talking to a couple of scouts a day,” he said. “A bunch of them are coming to football games. I had a couple last week and a couple this week who are coming. It's just a fun time right now.”