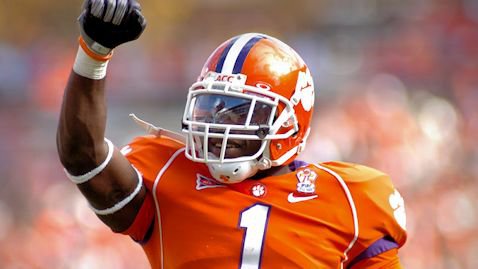 CLEMSON – South Carolina running back Mike Davis tweeted earlier this week that it will be interesting to see what kind of clothing his big brother wears to the Clemson-South Carolina game this Saturday night.

The elder Davis brother is, of course, former Clemson running back James Davis

James is second on Clemson’s all-time rushing list with 3,881 yards and finished his college career fourth in Tiger history in career all-purpose yards (4,309). He was drafted by the Cleveland Browns in the 2009 NFL Draft, and bounced from Cleveland to Washington to Houston to Detroit before being let go by the Lions.

Mike has been a major offensive force for the Gamecocks this season, with 1,112 yards rushing, and has the body type and speed that NFL scouts drool over.

Swinney coached James over the final seven games of his Clemson career, and recruited Mike out of Stone Mountain High School in Georgia. As a result, Swinney is familiar with the brother duo, and he was asked during his Tuesday press conference if he thought Mike was a better running back than James.

Last season in Death Valley, Mike stepped in and had 12 carries for 43 yards against the Tigers. Overall, he rushed 52 times for 275 yards and two touchdowns, setting the stage for his emergence this season.

“He kind of came on the scene last year, late for them,” Swinney said. “This year, he’s really become the guy. James got off to a little better start, probably, as a freshman. He had a little more opportunity as a freshman.”

Swinney said that with the rivalry game being played near Thanksgiving each season, it would be interesting to hear the talk around the Davis dinner table.

“If he stays on the track he’s on, it’ll be interesting to see who has bragging rights at the turkey table when those boys get together,” Swinney said. “They can each have their own things to talk about.”

He then said that the brothers are very similar in their style of play.