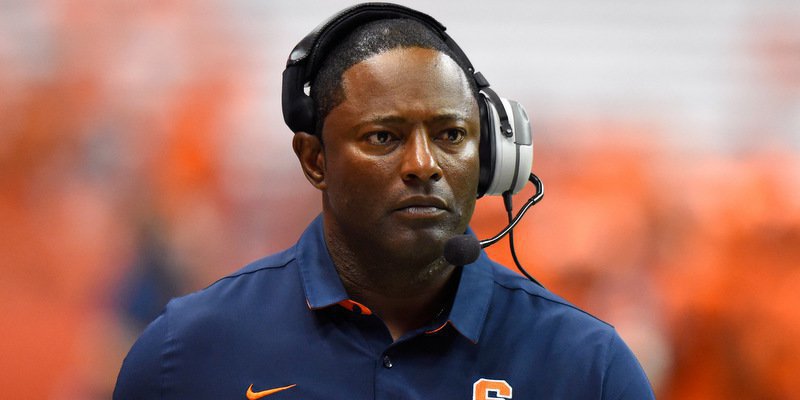 Babers is hopeful his team can pull off the upset (Photo by Rich Barnes, USAT)

Syracuse head coach Dino Babers has been a part of teams that have knocked off top-ranked programs, and he’s hopeful his team can pull off the upset Friday in the Carrier Dome against a team he thinks deserves to be ranked number one.

Clemson is ranked No. 2 in the latest AP Top 25, defeating its opponents by an average of nearly 24 points per game. The Tigers are 6-0 overall and 4-0 in the ACC while Syracuse is 3-3 (1-1) following last weekend’s win over Pitt.

Game time is set for 7 p.m. on Friday night. It will be televised nationally on ESPN.

Babers, in his second season on the job at Syracuse, told the media this week that Clemson is like a lot of great teams – that he’s beaten.

Babers then said he is looking for support from the Syracuse community Friday night.

“We are excited to have the opportunity to play the Clemson Tigers who are the National Champions from last year,” he said. “Obviously, they are doing a fantastic job this year. Coach Swinney coaches one of the premier programs and the way he does it is absolutely the right way. I have nothing but respect for him and the program. It is going to be family weekend for us. We expect fantastic community support and it is going to be an outstanding contest on Friday night.”

Clemson is the only team in the Associated Press poll era to defeat three Top 15 teams in the month of September, knocking off Auburn, Louisville and Virginia Tech in the season’s first five weeks. Two of those wins were on the road, and Babers says he thinks the Tigers deserve to be ranked No. 1.

Babers is hopeful his team can pull off the upset (Photo by Rich Barnes, USAT)"

“I think the biggest motivation is that they are a really good football team in 2017, not to take away anything from 2016 because they were national champs,” he said. “I think that it is more important that they are ranked No. 2 in the country this year and, depending on where you are at, they probably should be ranked No. 1. They are a fantastic football team and a fantastic program.”

Clemson quarterback Kelly Bryant might be a game-time decision, and Babers says Bryant requires a different defense because he can make plays with his legs.

“Obviously when the quarterback has legs, you have to play a different style of defense. The thing about their quarterback is that they had their backup quarterback come into the game against us last year and he had 21 points,” Babers said. “He made an NFL team and he wasn’t even the starter at Clemson. They have really good players.”

“They are solid. They not only have solid starters but they also have solid backups,” Babers said. “You can tire them out and they’ll put someone in who plays just like the guy in front of him. Their front four guys are as good as anybody. There are no holes.”

Babers finished by saying he hopes the Carrier Dome is sold out.

“This is huge. To have the community and the nation tuning in on Friday night to the Carrier Dome, we need to have that thing packed,” he said. “It needs to be a situation where everybody is involved. Come watch us. It’s a heck of a task, there’s no doubt about it, but let’s get in the chairs and have an opinion and let’s watch and see what can happen.”